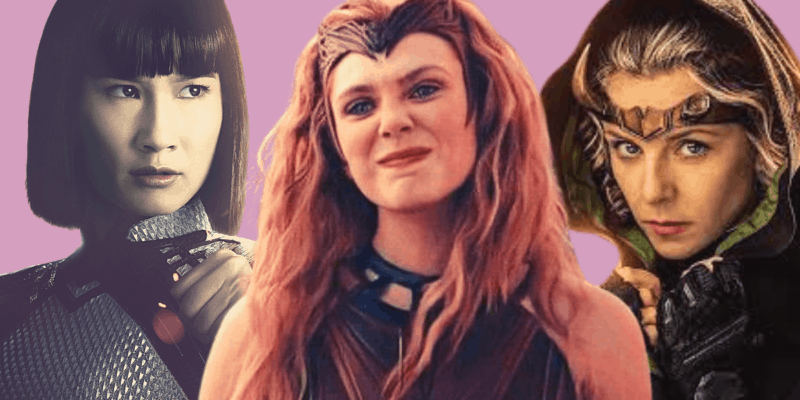 Marvel Phase 4 has already had some ups and downs. Shang-Chi and the Legend of the Ten Rings just hit theaters and is already setting records, meanwhile, Black Widow came out to a mixed reception. Love it or hate it, there is a pattern that is quickly emerging and fans have taken notice and not all of them are happy.

Marvel Studios President Kevin Fiege has made it clear that the studio is pushing for more diversity in the biggest franchise in the world. He has made good on his promise with casts like the upcoming Eternals film directed by Chloe Zao.

Also, each Phase 4 Marvel film and Disney+ Original Series has featured at least one strong female character. Marvel fans have picked up on a disturbing pattern where these characters are all being set up to become villains later in Phase 4.

Wanda Maximoff AKA The Scarlet Witch

Wanda Maximoff AKA the Scarlet Witch (Elizabeth Olsen) has definitely been having a tough time in Phase 4. It’s no surprise since the Infinity Saga ended with the love of her life, Vision (Paul Bettany) dying not once but twice at the hands of Thanos (Josh Brolin) in Avengers: Infinity War (2018).

Then she was blipped away only to return to find SWORD director Tyler Hayward (Josh Stamberg) dissecting Vision’s synthezoid body to create the evil White Vision. WandaVision followed Wanda’s attempt to process her tremendous grief in the most unhealthy way imaginable.

She trapped the citizens of Westview in her reality-warping hex and even created two twin sons Billy (Julian Hilliard) and Tommy (Jett Klyne). The series ended with them erased from existence and Wanda becoming the Scarlet Witch, accessing her chaos magic.

It has already been confirmed that Wanda will be the villain of Doctor Strange in the Multiverse of Madness (March 25, 2022). While Wanda has been a villain in Marvel Comics many times, including the infamous House of M storyline it is odd that Marvel Studios finally gave her full powers only to set her on a dark path.

Related: Russo Brothers Might Be Done With Marvel For Good

Sharon Carter (Emily VanCamp) debuted in Captain America: Winter Soldier (2014) as SHIELD Agent 13 and potential love interest of Steve Rogers AKA Captain America (Chris Evans). She was the grand-niece of Agent Peggy Carter (Hayley Atwell) and it never seemed like Marvel Studios knew what to do with her character.

She helped Steve, Sam Wilson AKA Falcon (Anthony Mackie) and Bucky Barnes AKA Winter Soldier (Sebastian Stan) escape the Sokovia Accords in Captain America: Civil War (2016). Then Marvel seemed to forget about her. They brought her back in The Falcon and the Winter Soldier and finally tried to give her some decent screen time. Only now she was the villainous Power Broker who was trying to get her hands on the super-soldier serum for her criminal empire.

Black Widow (2021) was a farewell letter to Natasha Romanoff (Scarlett Johansson). But it also introduced Marvel fans to her spunky kid sister Yelena Belova (Florence Pugh) who will be taking her place in the Marvel Cinematic Universe after Natasha’s untimely death in Avengers: Endgame (2019).

Yelena’s story in Black Widow revolved around her finally being able to determine her own path after years of being brainwashed and controlled by the Red Room. Her first task was to free the other Black Widows who were still being controlled by Deykov (Ray Winstone) and as she leaves with Taskmaster AKA Antonia Dreykov (Olga Kurylenko) it is clear she is on the right path.

However, cut to the post credit scene where she is visiting her sister’s grave. She is joined by Contessa Valentina Allegra De Fountaine (Julia Louis-Dreyfus). Val has been building a team of Dark Avengers included US Agent John Walker (Wyatt Russell) and she sends Yelena on a mission to kill an Avenger – Hawkeye AKA Clint Barton (Jeremy Renner).

Marvel’s Loki series introduced Sylvie (Sophia Di Martino) as a much more heroic variant of the God of Mischief (Tom Hiddleston). It is only when Loki meets his female variant that he seems to realize that there is something good inside of himself. The Loki series is all about the trickster learning to love himself, though Marvel fans are divided on how they feel about the Loki/Sylvie relationship.

However, the Loki finale turns the heroic character, Sylvie, on her head. She decided to risk the fate of the Marvel Universe in order to get her revenge on the Time Variance Authority (TVA). She killed He Who Remains (Jonathon Majors) and created the Marvel Multiverse.

And Marvel fans will most likely see Sylvie again in Loki season 2. The second season needs a new villain to replace He Who Remains and while it could be his variant Kang the Conqueror it could also be Sylvia AKA Lady Loki. Kang is already going to appear in Ant-Man and the Wasp: Quantumania  (February 17, 2023).

Shang-Chi and the Legend of the Ten Rings introduced a number of new strong female characters. The platonic friendship between Shang-Chi (Simu Liu) and Katy (Awkwafina) stole the screen. Marvel also introduced Shang-Chi’s sister Xialing (Meng’er Zhang). Shang-Chi abandoned his little sister with their father Wenwu (Tony Leung) before she escaped to build her own empire.

Though she teamed up with her brother to save Tao Lo in the record-setting Marvel film, the post credit scene set her to be his antagonist in Shang-Chi 2. In Marvel Comics, she fought her brother as the leader of the Ten Rings criminal organization and she assumed her throne at the end of the movie.

Related: Russo Brothers Might Be Done With Marvel For Good

So, what do you think? Let us know in the comments below.