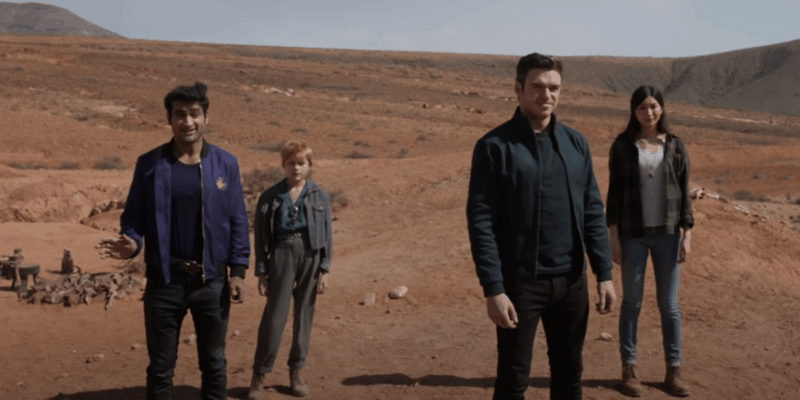 Marvel’s Eternals is just one month out from debuting exclusively in theaters. And while the whole of Phase 4 seemed a long way off at one point, 2021 has delivered exponentially. From television series like WandaVision to box office smashes like Shang-Chi and the Legend of the Ten Rings (2021), Kevin Feige’s Marvel Cinematic Universe has exploded on the big and small screen this year.

Eternals was confirmed as an exclusive theatrical release just before Disney announced all of its projects would follow suit after Shang-Chi and the Legend of the Ten Rings‘ remarkable success not only at the domestic Labor Day box office but globally, and the Scarlett Johansson fallout in relation to Black Widow (2021).

The superhero epic will see the arrival of the Eternals in the form of Sersi (Gemma Chan), Ikaris (Richard Madden), Kingo (Kumail Nanjiani), Sprite (Lia McHugh), Phastos (Brian Tyree Henry), Makkari (Lauren Ridloff), Druig (Barry Keoghan), Gilgamesh (Don Lee), Ajak (Salma Hayek), and Thena (Angelina Jolie). Kit Harington will also star as the human warrior, Dane Whitman AKA Black Knight. It has also been rumored to include Dan Stevens as Deviant antagonist, Kro, but his involvement is yet to be confirmed.

When Marvel reshuffled its release calendar earlier this year, Eternals was one of the projects that was left untouched. This move most likely signals the fact that iconic Marvel Comics characters will have a larger part to play in the future of the Marvel Universe, and the characters fans will meet in November may be here for the long run like the Avengers were throughout Phases 1, 2, and 3.

Zhao and Feige have remained tight-lipped on the plot of the next MCU film. The trailers have revealed elements in part, for example, we know that the Eternals could not interfere in Thanos’ (Josh Brolin) snap, and only in matters relating to their long-time adversaries, the Deviants.

In a rather interesting and shocking turn of events, one actor has confirmed that an unexploded bomb was discovered on the set of the upcoming film, leading to the MCU production being delayed.

What about an unexploded bomb?!

In an interview with Empire, via The Direct, Eternal actor, Kumail Nanjiani who plays Kingo, shared that the bomb scare was in fact a real unexploded bomb. It was during filming in the Canary Islands in 2019, that the bomb was discovered.

“Some of the actors found this metal thing and were like, ‘Hey, what’s that?’… I remember being like, ‘Guys why’s the schedule changing? WHAT DO YOU MEAN, THERE’S A BOMB?!?”

An earlier report detailed the moment the bomb was found:

Onlookers in Canary Island Fuerteventura told how panic quickly spread during shooting of The Eternals and everyone was ordered back to a safe distance.

An insider at the set said: “It was obviously terrifying — the bomb could have been there for decades untouched but who knows what might have happened if it was disturbed.

“Some of the biggest stars in the world were on set and nobody was taking any chances. Fortunately, experts dealt with it.”

The articles suggest that the unexploded bomb was connected to a 1940s Nazi Germany base that had previously occupied the island during the Second World War. The delay doesn’t seem to have been that significant as production continued and the film wrapped in early 2020.

Will you be seeing Eternals this November? Let us know in the comments!