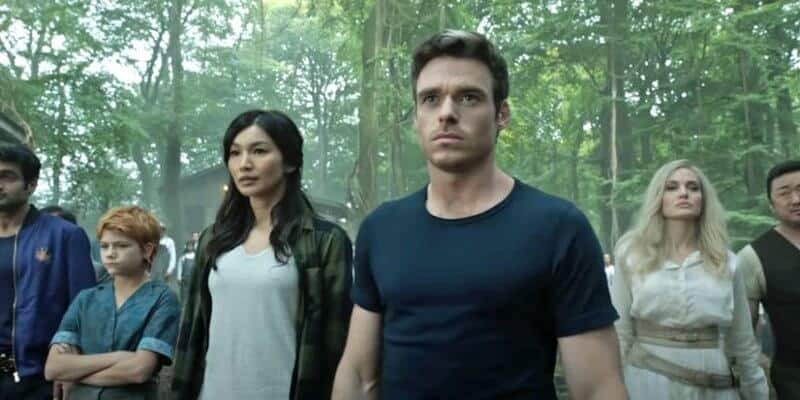 After being dormant throughout the first three Phases of the Marvel Cinematic Universe, the legendary Eternals are finally about to debut this year. Here’s your guide to how these beings will shake up the MCU.

History of the Eternals in the MCU

Who is the leader of the Eternals?

The group of powerful beings is led by the Prime Eternal with the leader of the Earth‘s Eternals able to begin the ritual of the Uni-Mind — the ability to merge themselves into one stronger entity. Prime Eternals of the past include Zuras, Thena, and Ikaris. The upcoming Eternals Marvel movie sees Salma Hayek’s Ajak as the leader of the group within Kevin Feige’s Marvel Cinematic Universe.

What is the comic book history of the Eternals?

The Eternals first debuted in The Eternals #1 in July 1976. Jack Kirby finally introduced the Earth‘s defenders to the Marvel comic book universe, landing on the title of the project — The Eternals — after first beginning as The Celestials, and then Return of the Gods.

The powerful Marvel characters have continued to have a strong comic book presence throughout the 1990s and into the present day. A 12-issue miniseries debuted in 1985, before the one-shot comic, New Eternals: Apocalypse Now #1, was released in 2000. Then in 2006, legendary fantasy author, Neil Gaiman, established a seven-issue miniseries that cemented the Eternals into the more current Marvel comic book world. Another ongoing series brought the Eternals back again from 2008-2009, and then January 2021 saw the Earth‘s defenders return once more. The synopsis of the Kieron Gillen-helmed issues is as follows;

NEVER DIE. NEVER WIN. ETERNALS. What’s the point of an eternal battle? For millions of years, one hundred Eternals have roamed the Earth, secret protectors of humanity. Without them, we’d be smears between the teeth of the demon-like Deviants. Their war has waged for all time, echoing in our myths and nightmares. But today, Eternals face something new: change. Can they – or anyone on Earth – survive their discovery?

What is the cinematic history of the Eternals?

While the Eternals are yet to appear in the MCU, Marvel fans have already encountered their creators before in other Marvel movies. Guardians of the Galaxy (2014) first referenced the unique Celestials before James Gunn fully introduced the being, Ego (Kurt Russell), in the sequel, Guardians of the Galaxy Vol. 2 (2017). Peter Quill (Chris Pratt) then went on to harness Celestial power in the Guardians’ battle with Ego during the climax of the Phase 3 movie. It’s worth mentioning that both Guardians movies are cinematic successes, boding well for the future of the Celestials in the MCU.

Skills and capabilities of the Eternals in the MCU

What are the skills of the Eternals in the MCU?

The Eternals of the MCU are set to be the big new team-up of the Marvel Universe. Following the supposed end of the Avengers following the climactic events of the Infinity Saga with Avengers: Infinity War (2018) and Avengers: Endgame (2019), Eternals will potentially see this new wave of warriors dominate Phase 4 of the MCU.

Overall, the Eternals are incredibly powerful. As Marvel states;

All Eternals possess the capacity for superhuman strength, telepathy, flight, teleportation, illusion-casting, transmutation of organic and inorganic matter, and the generation of various forms of energy from their bodies, including force, heat, light, and other electromagnetic radiation.

In terms of their individual specialties, each member of the Eternals harnesses their own unique powers. Sersi can manipulate matter, Ikaris can fly, and also possesses superhuman strength and the ability to fire cosmic energy from his eyes, while Kingo uses his hands to fire that same cosmic energy. Sprite has the visual appearance of a 12-year-old and can project lifelike illusions with Phastos’s intelligence and cosmic inventions being this Eternal’s most identifiable skill.

Makkari harnesses cosmic super-speed and aloof loner Druig is able to use cosmic energy to manipulate the minds of others. In the comic books, Gilgamesh is the strongest of the Eternals, using super strength, flight, and rapid healing to conquer his enemies. The spiritual leader, Ajak, has continued to aid the development of the human race whilst also being able to communicate with the Eternals’ creators, the Celestials. Finally, Thena can use cosmic energy to form any weapon.

What are other capabilities of the Eternals in the MCU?

Due to their immense strength, the Eternals are one of the most powerful groups of beings in the Marvel Universe. Despite their cosmic powers, the Eternals have shown themselves able to harmoniously exist alongside the human race, helping them develop and advance across time.

As Marvel Studios revealed in their first Eternals trailer, Hayek’s character, Ajak, tells us – “We have watched, and guided. We have helped them progress and seen them accomplish wonders. Throughout the years, we have never interfered. Until now.” You can watch the teaser trailer down below.

How do the Eternals use their skills and capabilities in the MCU?

While the Eternals have not yet been featured in the MCU, we know that they will face the Deviants — their long-time comic book adversaries. Why the Eternals did not interfere during the “Avengers-level” events of the past is anyone’s guess, but if they are finally coming out of hiding to face the Deviants — potentially led by Deviant leader, Kro — then it is sure to feature their immense powers in this all-out war.

Weaknesses of the MCU Eternals

What are the weaknesses of the MCU Eternals?

Arguably, the strength of some and the weakness of others, the Eternals time on Earth has brought them uniquely close to the human race. While some of the Eternals see their role as protectors of the human race as little more than carrying out their duty, some show immense empathy towards them.

It has been confirmed that Gemma Chan’s Sersi will be the center of the ensemble movie and has been teased that she will show a heightened affinity for humankind. This will most likely lead to tensions between her and some of the other Eternals. Of course, a team shake-up is not unfamiliar territory for the MCU — Captain America: Civil War (2016) shook the Avengers to their very core. This is Chan’s second role in the MCU following her turn as the character Minn-Erva in Captain Marvel (2019). Now, with What If…? about to launch it’s never been more interesting for MCU character casting.

How did the Eternals discover their weaknesses?

While the Deviants could be argued as the Eternals major weakness — they have been locked in a historic war, after all — a recent addition to Marvel‘s Heroes Reborn comic series may have just given the Eternals a new weakness ahead of their cinematic debut. The Heroes Reborn event recently showed one Eternal being weakened by Vibranium radiation, and we know that the MCU loves Vibranium technology.

Eternals are genetically engineered to have almost everything in common, which means that – logically – if one Eternal possesses a weakness to Vibranium, then it is reasonable to assume the other Eternals do as well.

How have the Eternals’ weaknesses been exploited in the MCU?

Having no track record in the MCU yet, we don’t know what the Eternal’s weaknesses will be or how they will be exploited. However, if the Heroes Reborn event is anything to go by and Vibranium is confirmed in canon as a weakness it could pose for an interesting feature of the Marvel film.

Who the Eternals have fought in the MCU

Who have the Eternals fought in the MCU?

Yet to star in the Marvel Cinematic Universe, the Eternals November debut is sure to set their MCU journey in progress.

Who have the Eternals lost to and defeated in the MCU?

The Eternals have remained in hiding during the whole of the MCU so far, therefore from an audience perspective, the Eternals have not yet defeated or lost to anyone. We know from their Marvel Comics history that the cosmic beings have been on Earth for a very long time and if Loki‘s messing with the Multiverse is anything to go by, then the Celestial‘s creations might go toe to toe with past villains of the MCU.

Who are the enemies of the Eternals?

The enemies of the Eternals are the Deviants. Made alongside the Eternals and humans by the Celestials in Marvel‘s own Big Bang event, the Deviants are monstrous beings intent on destruction. It is confirmed that the Deviants will be the villains in the Nomadland (2020) director’s movie but in what capacity they will appear is still under wraps.

Although back in 2019, Marvel boss Kevin Feige teased what we can expect from the upcoming Phase 4 movie. Per CinemaBlend;

While at the [San Paulo] comic convention, Kevin Feige also announced Eternals’ story will take place across 7,000 years and will show the Celestials in their “full, true enormous power.” The Marvel boss did tell fans that the Deviants will look “very different” than originally portrayed in the comics.

This is interesting considering that the Mad Titan, Thanos (Josh Brolin) — who has Deviant genes — looked very much like his comic book counterpart. As Marvel describes;

From his birth on Saturn’s moon of Titan, Thanos was always an outsider. He carries a Deviants gene, which causes his gruesome and misshapen appearance, with purple, rugged skin […] Still, Thanos is an Eternal, a type of super human who, according to the Celestials, was meant to be a protector of Earth. And, with a twisted mind, he took his cosmic duty to heart.

What is even more intriguing is that if the Eternals didn’t interfere in the Thanos affairs of the MCU, then the actual Deviants must be an even greater threat to humanity. As well as this, with the Celestials shown in full force, we could see the City of the Space Gods and the relic site, the God Chamber, in the upcoming MCU film.

Eternals lands in November after Shang-Chi and the Legend of the Ten Rings (2021) in September, and right before Spider-Man: No Way Home (2021) in December. The Marvel studio movie at this time is exclusively coming to theaters.

Are you excited to see Marvel‘s Eternals this year? Let us know in the comments!

Comments Off on How Powerful are Eternals in the Marvel Universe?