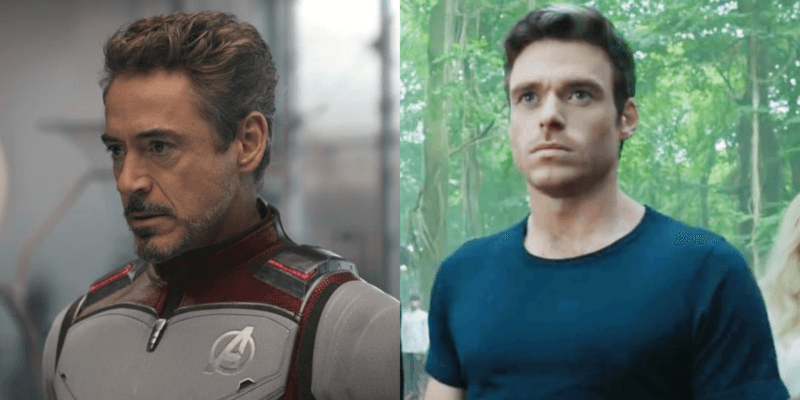 The new trailer for Marvel’s Eternals casually namedrops some big-time MCU names while also raising an intriguing question — who can replace Iron Man and Captain America as leaders of the Avengers?
The new full-length Eternals (2021) trailer reveals more detail on the immortal beings of the Marvel Cinematic Universe that have quietly guided humanity without direct interference for thousands of years.

A hotly anticipated new trailer dropped today giving fans a look at Marvel’s Eternals (2021) for the first time since teaser footage was revealed earlier this month. The epic movie from Oscar-winning director Chloé Zhao will introduce audiences to a race of immortal aliens, living among humans in secret for millennia.
Many Marvel fans were surprised to learn that the god-like super-powered team has largely stuck to the sidelines with regards to human conflict, contrasting starkly with the whatever-it-takes mentality of that other super team in the Marvel Cinematic Universe – the Avengers.

Where were the Eternals during the events of the Avengers films?

It seems like the Eternals’ powers would have been helpful in the battle against Thanos during the events of Avengers: Infinity War (2018) and Avengers: Endgame (2019).  However, it seems as though the ageless entities were observing the prime directive, and taking a hands-off approach.
Via voiceover, Salma Hayek as Ajack — sage leader of Earth’s Eternals — describes the lowkey nature of the Eternals’ participation in human history, saying,

“We have watched and guided. We have helped them progress, and seen them accomplish wonders. Throughout the years, we have never interfered. Until now.”

If Thanos and the Infinity Gauntlet couldn’t compel the Eternals into direct intervention in the Marvel Cinematic Universe, what in the world possibly could?

In a cheeky movement at the end of the Eternals (2021) trailer, while the super-team is sitting down to a family-style smorgasbord, Sprite (Lia McHugh) raises a question to the group, positing,

“So now that Captain Rogers and Iron Man are both gone, who do you think’s gonna lead the Avengers?”

Ikaris, portrayed by Game of Thrones alum Richard Madden, considers for a moment and responds that perhaps he could lead the Avengers. After a beat, the Eternals erupt in laughter at the quip. Referencing the apparent retirement of old man Captain America (Chris Evans) and snap-back death of Iron Man, Tony Stark (Robert Downey Jr.) in Avengers: Endgame (2019).

You can watch the trailer below:

The fact that the Eternals are laughing about sitting out the entirety of the Infinity Saga aside, the light-hearted moment was a fun reference for Marvel fans. But it could also serve to offer some perspective on the direction of the new franchise. With the Avengers currently disassembled in the Marvel Cinematic Universe, the immortal heroes could finally step up to fill the void properly as Earth’s mightiest heroes — both as in-universe protectors, and financially for Marvel Studios and Disney.
Marvel Studios has created the most successful film franchise of all time with the Marvel Cinematic Universe. As they enter Phase 4 of their legendary run, Marvel Studios is taking a big swing with arguably their most ambitious project to date.

Marvel Comics is currently in the midst of a high-profile relaunch of Eternals comics from writer Kieron Gillen and artist Esad Ribic. The Eternals were never a premiere property for Marvel Comics but, with the new film on the horizon, Marvel Comics is understandably placing an emphasis on elevating the characters.

Director Chloe Zhao was recently awarded an Oscar for her work on Nomadland (2021), a film that won the Academy Award for Best Picture. Her unique vision and focus on realism in the context of a millenium-spanning super-epic, promises to offer a new look to the Marvel Cinematic Universe from a fan of the source material. Speaking to The Hollywood Reporter, Chloe Zhao shared,

It is worth noting that Marvel Studios appears to already be assembling a new team for Avengers 5. Anthony Mackie is confirmed to star in Captain America 4 as Sam Wilson after taking over as Cap in The Falcon and the Winter Soldier. It’s likely that his “co-worker” Bucky Barnes (Sebastian Stan) will also continue working alongside Captain America.
Black Panther: Wakanda Forever (2022) is poised to introduce a new Black Panther after the passing of the original Black Panther (2018) icon, Chadwick Boseman.  And Captain Marvel (2019) sequel, The Marvels (2022) will premiere Ms. Marvel Kamala Khan while bringing WandaVision standout Teyonah Parris into the fold as Monica Rambeau to join the returning Captain Marvel, Brie Larson.
Why do you think the Eternals have been staying out of the Marvel Cinematic Universe this whole time? Let us know in the comments!