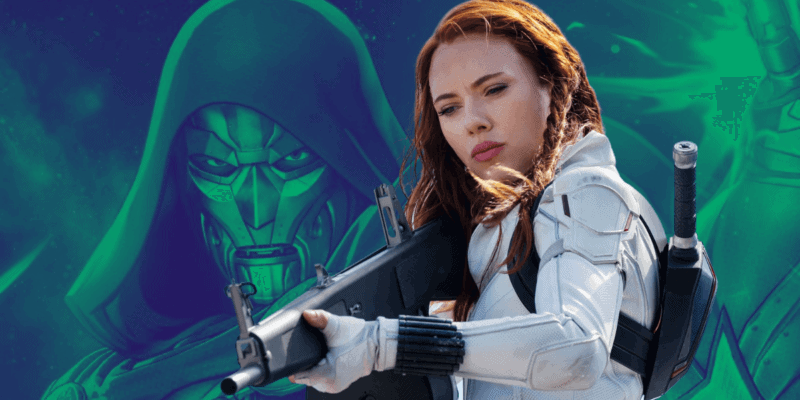 Director Jon Watt’s take on Fantastic Four is in the very early stages of development, and we don’t expect to see the film premiere in theaters until late 2023 at the earliest. However, with a Multiverse of stories to tell in Phase 4, there’s no doubt we’ll soon see Marvel Studios beginning to lay the groundwork for the super team’s reveal. If one Black Widow writer/producer had his way, Marvel fans would’ve already seen a major reference to the world of Fantastic Four.

The premiere of the long-delayed Black Widow (2021) from director Cate Shortland in theaters and on Disney+ Premier Access marked the first Marvel Studios movie release in more than two years. While fans of the Infinity Saga know Natasha Romanoff (Scarlett Johansson) didn’t survive the events of Avengers: Infinity War (2018) Avengers: Endgame (2019), the film spun back the ol’ Sacred Timeline a bit to a story that takes place just after Captain America: Civil War (2016). Black Widow catches up with Natasha Romanoff on the run from the authorities led by General “Thunderbolt” Ross following the disaster in Sokovia that led to the disassembly of the Avengers.

One Black Widow actor claims that his appearance as Ursa Major — an X-Men character — is the official first appearance of a mutant in the Marvel Cinematic Universe. Another fun Easter egg was Yelena’s vest that she gifted to Natasha Romanoff. That vest — and its many pockets — is the very same vest Black Widow wears in Avengers: Infinity War (2018). Also a misnomer from Yelena, who refers to Red Guardian (David Harbour) as Crimson Dynamo — another superpowered Russian character from Marvel Comics.

The villainous Taskmaster also references the Avengers through mimicking the signature combat style of several Avengers all-stars — including Black Panther (Chadwick Boseman), Hawkeye (Jeremy Renner), and Captain America (Chris Evans). Even the polarizing reveal of Taskmaster’s identity as Dreykov’s daughter was a reference to a Loki (Tom Hiddleston) line from Age of Ultron.

A reference that didn’t make the cut, however, was one to a legendary Fantastic Four location — the home country of Doctor Doom, Latveria.

Black Widow writer and producer Eric Pearson recently spoke to IGN about his attempt to be the first Marvel producer to sneak in a Fantastic Four reference to a Marvel film, with a proposed line in an early draft of the Black Widow script. Discussing his failed but noble efforts, Pearson cheekily likened being the first to reference Doctor Doom on-screen to being a top commenter on Instagram, saying,

“I might’ve had a reference to [Doctor Doom’s country] Latveria in there — I might have, but I don’t think so. I don’t think that lasted very long. I’m always trying to throw Latveria into stuff. … It’s like one of those things where you want to be the first one to say it on an Instagram post or something!”

Who is Doctor Doom?

While Doctor Doom has chiefly been depicted as the big bad of the Fantastic Four on-screen, in the pages of Marvel Comics he has been a major antagonist to the Avengers, Spider-Man, the X-Men, and many other popular heroes throughout the years.

Latveria is the home country of Victor Von Doom, where he is the king and supreme leader.
Doctor Doom was portrayed by actor Julian McMahon in Fox’s Fantastic Four (2005), and Toby Kebbell in the Fantastic Four (2015) reboot.

In the Marvel Cinematic Universe Disney+ series The Falcon and The Winter Soldier starring Anthony Mackie and Sebastian Stan keen Marvel fans picked up on a potential reference to the nation of Latveria. Baron Helmut Zemo, himself an aristocrat from the small MCU nation of Sokovia — ravaged during the events of Avengers: Age of Ultron (2015) — mentions that his country had become “cannibalized by its neighbors,” signaling the possible intervention of Doctor Doom’s Latveria.

Since Jon Watts was announced as the director of Marvel Fantastic Four reboot of the former 20th Century Fox property, little else has been announced about the film’s development.

Watts has directed Tom Holland in the Marvel Cinematic Universe Spider-Man series, proving he can successfully integrate a troubled film franchise into the Marvel Cinematic Universe. While no casting information has been released by Marvel Studios as yet, Marvel fans have been dream casting John Krasinski and Emily Blunt as Reed Richards/Mister Fantastic and Invisible Woman/Sue Storm.

Related: All the Rumors About ‘Spider-Man: No Way Home’

Fox Studios found some success with their Fantastic Four (2005) film and its sequel Fantastic Four: Rise of the Silver Surfer (2007). Their attempt to reboot the franchise with Fantastic Four (2015) did not find the mark with critics or audiences. When Disney acquired Fox and their extensive library in 2019, Marvel fans immediately began hoping to see the Marvel’s first family get the Kevin Feige treatment with an MCU debut.

When do you think we’ll get our first mention of the Fantastic Four in the Marvel Cinematic Universe? Let us know in the comments!