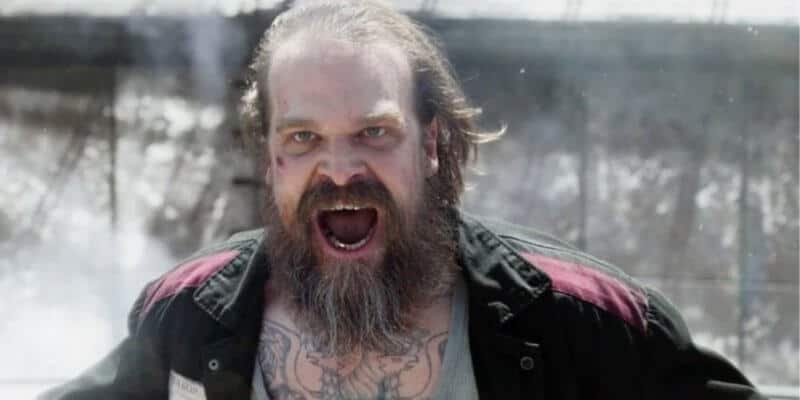 **Spoilers for Black Widow below!**

Since last year, many Marvel fans, including myself, have been waiting anxiously to experience the backstory of Natasha Romanoff/Black Widow (Scarlett Johansson). Fortunately, the wait was over on Friday, July 9, 2021, as theaters and Disney+ Premier Access allowed fans to enter the Black Widow world and learn more about Natasha and the Russian agents who raised her as their own child — until, of course, they surrendered her to the Red Room.

I immensely enjoyed learning about each character, especially the Red Guardian. Alexei Shostakov, played by David Harbour, was essentially the Soviet Union’s version of Captain America. After completing a three-year mission raising Natasha and Yelena in Ohio, project Red Room leader, Dreykov, locks Alexei away in jail. After spending many years behind bars, Alexei showcases the many tattoos he possesses, which have more meaning than you might expect.

Soft Spot for His “Girls”

During a scene where Alexei is telling stories about his glory days while arm wrestling some inmates in prison, you might see a tattoo dedicated to Natasha and her “sister”, Yelena Belova (Florence Pugh). According to Looper:

On Alexei’s bicep, you might notice two roses. Underneath the flowers are the words “Наташа” and “Елена.” Translated into English, these words are actually names: “Natasha” and “Yelena,” respectively. This shows that all of these years later, Alexei always remembered the two girls who pretended to be his daughters while they lived in the United States.

Although Super Soldier Alexei and undercover spy Melina Vostokoff (Rachel Weisz) were forced to pretend to be parents to Natasha and Yelena for three years, it is undeniable that Alexei formed some real feelings towards his non-related daughters as he dedicated a tattoo to both of them.

In a Variety interview, actor David Harbour mentions a last-minute tattoo addition that was one of his favorites. Written on his knuckles were the words, Karl Marx, which pays tribute to Karl Heinrich Marx. Marx was a German-born revolutionary, sociologist, historian, and economist and was best known for writing “The Communist Manifesto.”

Being the topken super hero of the Soviet Union, the Red Guardian also pays tribute to Vladimir Lenin, Prime Minister and founder of the Russian Communist Party, with tattoos his head on his stomach.

Notice the tattoo of a woman with a bob haircut? David also shared with Variety how much he loves actress Rachel Weisz, so he and the Black Widow costuming team decided to showcase his admiration for her by inking his faux wife, Melina — in her younger years — on his neck.

Of course, Alexei couldn’t help himself and decided to add a massive tattoo of himself dressed up as the Red Guardian, planted smack dab in the middle of his back. After spending years in prison, it seems Alexei lost sympathy toward Melina and the girls, spending every day reliving his glory days as the Soviet Union’s greatest superhero.

We tend to see his narcissistic personality shine through in this scene, as one of the biggest tattoos on his body is of himself.

The official Disney+ website description of this film states:

Natasha Romanoff aka Black Widow confronts the darker parts of her ledger when a dangerous conspiracy with ties to her past arises. Pursued by a force that will stop at nothing to bring her down, Natasha must deal with her history as a spy and the broken relationships left in her wake long before she became an Avenger.

Although the relationship between Alexei and Natasha is clearly not as loving as some father-daughter relationships are, you can clearly tell that those three years meant more to him than what he shares at the beginning of the film, and is an excellent way to showcase some unique Marvel Easter eggs. Didn’t notice any of them at first glance? Be sure to check out Black Widow on Disney+ — and keep in mind that subscribers will be able to watch the movie for free on the streaming service starting October 6, 2021.

Which of Alexei’s tattoos is your favorite? Let us know in the comments below!

Comments Off on Alexei’s ‘Black Widow’ Tattoos Mean Much More Than You Think!