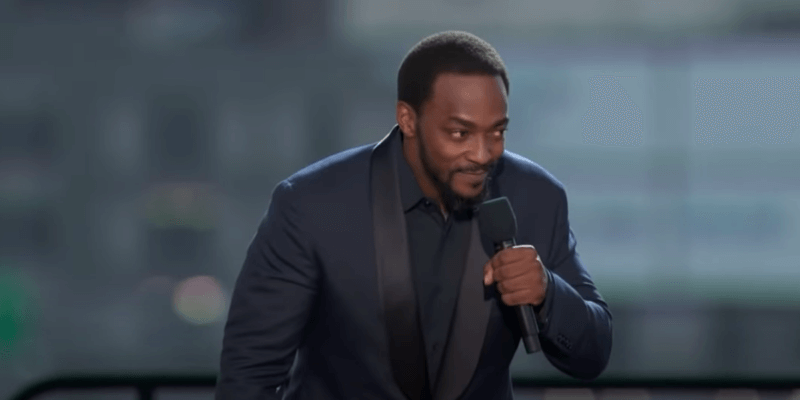 Outspoken Marvel actor Anthony Mackie was tapped to host the 2021 ESPY Awards live from New York City. The annual gala event pays tribute to the top athletes, teams, and moments in sports from the past year. In his capacity as host, Anthony Mackie got to show off his skills behind the microphone, opening the event with a comedic monologue that poked fun at headline-grabbing moments from across the wide world of sports.

Mackie — who stars alongside Sebastian Stan (Bucky Barnes) in the Disney+ series The Falcon and The Winter Soldier as the new Captain America, Sam Wilson — used the opportunity to blast the U.S.A. Track & Field for their recent decision to suspend American sprinter Sha’Carri Richardson from competing at the upcoming Tokyo Olympic Games.

The ESPY Awards were broadcast on Disney-owned ABC and the ESPN family of networks live from a rooftop venue in New York City. Mackie referenced this fact with his opening one-liner, joking:

“The greatest celebration of sports is back! We up here on a rooftop in New York City. Man, we’re so high they wouldn’t let us compete in the Olympics.”

Sha’Carri Richardson recently tested positive for THC — the psychoactive element of marijuana — at the U.S. Olympic Team Trials. The 21-year-old athlete had finished first in the 100-meter race at the event and is recognized as one of the fastest women in the United States. Despite her success at the U.S. Olympic Team Trials, Richardson was left off the U.S. Olympic Track & Field roster for the Tokyo Games for violating the banned substance policy of the U.S. Anti-Doping Agency (USADA). As Americans’ views on marijuana continue to shift, with the drug becoming legal or decriminalized in more municipalities throughout the United States, many viewed Richardson’s suspension as the result of an obsolete rule.

Anthony Mackie took exception to what he felt was a blunder by the US Olympic team, as he shared later in his monologue:

“USA Track & Field: How you mess it up, dog? How do you justify banning Sha’Carri Richardson for smoking weed? Weed is a de-hancing drug! It doesn’t make you do anything but want to watch another episode of ‘Bob’s Burgers.’ You never saw Snoop Dogg run anywhere. I don’t know how you justify not letting her run.”

Sha’Carri Richardson was on hand for the event and seemed to take Anthony Mackie’s wisecracking in stride. Richardson publicly addressed her suspension on NBC’s Today admitting that she used marijuana to cope with the death of her mother. The athlete explained:

“I know what I did, I know what I’m supposed to do, and I still made that decision. I’m not making an excuse or looking for empathy in my case. However, being in that position in my life, finding out something like that…dealing with the relationship I have with my mother, that definitely was a very heavy topic on me.”

Anthony Mackie went on to defend another athlete for what the Marvel Cinematic Universe actor views as unfair treatment from her sport. “I don’t know how you punish Naomi Osaka for prioritizing her mental health,” Mackie said of the 23-year-old pro tennis phenom. This year, Naomi Osaka was fined $15,000 by the WTA for declining to attend a press conference at the French Open citing her own mental health. Mackie continued his support of Osaka while also name-dropping his new role in the Marvel Cinematic Universe, saying:

“That’s crazy. I’m no tennis exec, I don’t know, but if my sport had one of the most popular and marketable athletes on the planet, you know what I would do? I would probably make sure she felt comfortable and respected. But hey, what do I know, right? I’m just Captain America.”

Anthony Mackie recently came under fire for controversial comments the actor made about Marvel fans interpreting the relationship of Bucky Barnes (Sebastian Stan) and Sam Wilson as a homosexual one. In an interview with Variety, Mackie candidly shared his thoughts:

“So many things are twisted and convoluted. There’s so many things that people latch on to with their own devices to make themselves relevant and rational. The idea of two guys being friends and loving each other in 2021 is a problem because of the exploitation of homosexuality. It used to be guys can be friends, we can hang out, and it was cool. You would always meet your friends at the bar, you know. You can’t do that anymore, because something as pure and beautiful as homosexuality has been exploited by people who are trying to rationalize themselves.”

Anthony Mackie also made headlines in June of 2020 when he made comments criticizing Marvel Studios lack of diversity. During a chat with Variety’s “Actors on Actors” video series, Mackie called out practices by Marvel Studios that the Captain America actor believes to be racist. Mackie explained his stance, using the MArvel film Black Panther (2018) starring Chadwick Boseman as an example, saying,

“We’ve had one Black producer; his name was Nate Moore. He produced ‘Black Panther.’ But then when you do ‘Black Panther,’ you have a Black director, Black producer, a Black costume designer, a Black stunt choreographer. And I’m like, that’s more racist than anything else. Because if you only can hire the Black people for the Black movie, are you saying they’re not good enough when you have a mostly white cast?”

Mackie later went on to clarify his comments, saying that for Marvel, it wasn’t a “racism problem,” but rather an “unawareness problem.” Marvel boss Kevin Feige has pledged to add more diversity to the Marvel Cinematic Universe, both on-screen and behind the camera.

Do you agree with Captain America actor Anthony Mackie’s criticism of the U.S. Olympic Team’s decision to ban Sha’Carri Richardson from the Tokyo Olympic Games over Marijuana use? Let us know in the comments!