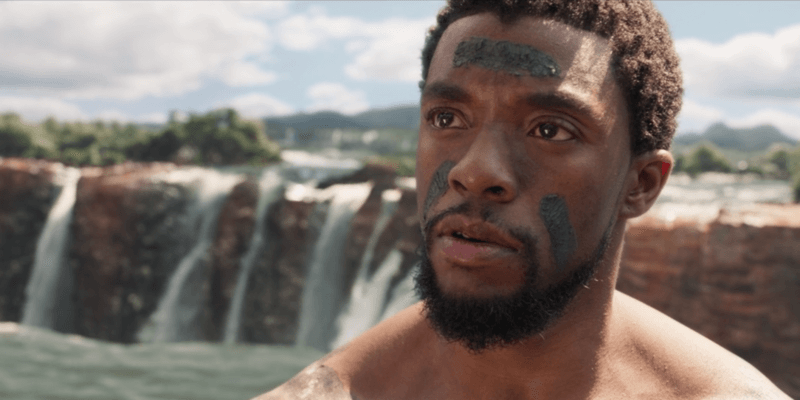 When Black Panther debuted in 2018, it not only changed the Marvel Cinematic Universe forever but ignited a movement that called for equality and diversity in big-budget, blockbuster storytelling. Led by the late actor Chadwick Boseman, Ryan Coogler’s Black Panther did wonders for Black representation in the superhero genre.

Unfortunately, Boseman’s T’Challa AKA Black Panther won’t be appearing in the Black Panther sequel due to the actor’s death last year. However, even after his passing, Boseman’s legacy lives on in the Marvel Universe and the Kevin Feige-helmed studio just unveiled the first look at his final appearance.

Marvel’s What If…? asks the obvious question of, “What if something else happened?”

The studio’s first anthology animated series, What If…? brings back most of their huge portfolio of live-action actors to reprise their roles in this new Marvel venture. It is an incredibly exciting and adventurous project from Marvel and will exist outside of the Marvel Cinematic Universe due to the nature of how the show will rewrite its own history through the collection of episodes.

As well as the Black Panther star, other popular characters like Hayley Atwell’s Peggy Carter will appear — Peggy’s story explores what would happen if she had taken the super-soldier serum and become Captain Carter, instead of Steve Rogers’ Captain America. Also lending their vocal talents to this new animated series are Sebastian Stan (Bucky Barnes/Winter Soldier), Paul Rudd (Scott Lang/Ant-Man), Tom Hiddleston (Loki), and Chris Hemsworth (Thor), among many, many others.

Marvel Entertainment just dropped the first look at this new television outing, and as well as revealing the release date (August 11), the trailer showcased Boseman’s character, T’Challa — although What If…? poses the question of what if Yondu (Michael Rooker) had saved him instead of Chris Pratt’s Peter Quill, and he’d become the fan-favorite Star-Lord.

Boseman’s final feature film was Ma Rainey’s Black Bottom (2020) for which he was nominated for the Academy Award for Best Supporting Actor, however, What If…? acts as the late actor’s final appearance in a Marvel project due to his passing from colon cancer last year. Black Panther fans are sure to rejoice at this last hurrah from their Wakandan King.

Boseman’s appearance in the new Marvel trailer marked for an emotional watch, and the actor quickly trended online with fans remembering his impact and continuing his legacy. Let’s take a look…

In a similar vein, @rambeaurogers shared their reaction to seeing and hearing Boseman’s T’Challa in the Marvel trailer.

chadwick last performance in the mcu.. i’m. not okay… i will cry

chadwick last performance in the mcu.. i’m. not okay… i will cry pic.twitter.com/D50oCIfMPv

Another fan, @joshuachenault1, revealed their thoughts on the animated series debut of the King of Wakanda.

Chadwick’s voice as T’Challa was featured in the new What If… preview and idk if I’m emotionally prepared this full episode ? pic.twitter.com/qH09hZwfR4

@_baechamel gave their view on this last emotional performance from the late actor.

chadwick boseman probably voiced t’challa in what if during the last weeks of his life in which we now know he was terminally ill, all because he knew how much t’challa means to people and wanted to give him to them one last time. his power is honestly amazing to me

chadwick boseman probably voiced t'challa in what if during the last weeks of his life in which we now know he was terminally ill, all because he knew how much t'challa means to people and wanted to give him to them one last time. his power is honestly amazing to me

i can already tell the t’challa episode is gonna hit me like a ton of bricks. i’m not ready to hear chadwick play him one last time 🙁

i can already tell the t’challa episode is gonna hit me like a ton of bricks. i’m not ready to hear chadwick play him one last time 🙁 pic.twitter.com/M4tVWDJxIT

It will likely be a heartbreaking time for Marvel fans everywhere — even if the tone of the episode doesn’t call for it — and a tribute, due to the heightened emotions surrounding Boseman’s character’s legacy as an Avenger and his own unfortunate passing.

What’s next for Black Panther?

Black Panther: Wakanda Forever (2022) has recently begun filming. Coogler is back in the director’s chair but as far as the story goes, no one knows. Kevin Feige has said the role of King T’Challa will not be recast but that the film will pay homage to Boseman’s Wakandan legacy. Most of the cast from Black Panther are set to return for the sequel, and the film is likely to draw the eyes of the world upon its release due to the uncertainty over how Marvel will handle the tragic passing of its leading man.

At this moment in time, the odds point to Letitia Wright’s Shuri taking over the Black Panther mantle but neither Marvel nor The Walt Disney Company has revealed what’s next for the Wakandan character, or even whether we will see Lupita Nyong’o’s Nakia, Danai Gurira’s Okoye and the Dora Milaje again. There is also a Wakanda Disney+ series in the works.

Are you excited to see Chadwick Boseman’s final performance in What If…? Let us know in the comments!