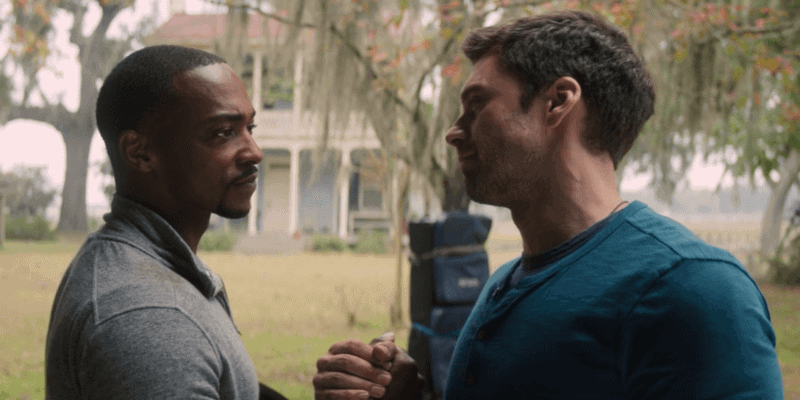 The Falcon and the Winter Soldier wrapped last month, but it is still very much a big deal. Marvel’s second outing into the streaming world following WandaVision saw fans reunited with Sam Wilson (Anthony Mackie) and Bucky Barnes (Sebastian Stan) as they tackle a global threat from the Flag-Smashers, as well as the internal battle of who should be the next Captain America.

One rumor that ran rampant — and still does — is the idea that Sam and Bucky showed signs of being romantically involved. Or, at least, they displayed levels of flirting that signaled their relationship could be more than platonic. Now, Stan himself has thrown his own comments on the show’s potential queer representation into the ring.

The rumor has never been officially debunked. That is, both characters are yet to enter any kind of romantic relationship with anyone else in the MCU. However, Mackie has stated many times in the past that he hoped his character would end up with Scarlett Johannson’s Natasha Romanoff AKA Black Widow.

We’ve also seen fans speculate over a romance between Bucky and Sam’s sister, Sarah (Adepero Oduye), following their on-screen chemistry in The Falcon and the Winter Soldier Episode 5 “Truth”. Their connection officially started a #ReleaseTheBuckySarahCut campaign online, which both Stan and Oduye weighed in on.

What did Sebastian Stan say?

In a recent interview with Variety, the Avengers: Infinity War (2018) actor spoke about how he sees Sam and Bucky’s relationship in the Disney+ show.

“I’m just happy that the relationship is embraced, and it should be embraced in whatever way or fashion that people desire and want it to be.”

Stan’s view is interesting in the way he isn’t shutting down the idea that Sam and Bucky could be romantically involved. Instead, he leaves it open to the fans, letting them come to their own conclusions or find happiness in their relationship, whatever it may be.

Fans’ thoughts on Bucky’s sexuality span all the way back to his first appearance in Captain America: The First Avenger (2011), where his palpable chemistry with Chris Evans’s Steve Rogers led to debates of the two heading towards a romantic entanglement. Stan’s recurring role in the Captain America film franchise, namely his turn in Captain America: Civil War (2016) solidified him as a fan-favorite MCU character.

This comment also comes in the wake of fans theorizing that Bucky is bisexual following a throwaway line in Episode 1: “New World Order”. However, The Falcon and the Winter Soldier director, Kari Skogland, debunked this idea, instead stating that Bucky’s comment was displaying the “oddity of the times”. The brainwashed assassin is 106 years old after all.

Kevin Feige’s Marvel Cinematic Universe is yet to introduce any openly gay characters into the canon. That will change, however, when Chloé Zhao’s Eternals (2021) opens in November. The Oscar-winner’s MCU movie will debut Brian Tyree Henry as the Eternal, Phastos, in the gay role who will also give the Marvel universe its first on-screen gay kiss.

It seems unlikely that Marvel Studios will make Sam and Bucky a couple in MCU canon, but if viewers are urging to make it happen at least they have Stan in their corner. The Monday (2020) actor will be seen next in the highly-anticipated Hulu series, Pam & Tommy.

The Winter Soldier actor takes on the role of Mötley Crüe drummer, Tommy Lee, starring alongside Lily James (Cinderella), who is unrecognizable as Baywatch star Pamela Anderson. Stan has also been heavily theorized to take over the role of young Luke Skywalker from Mark Hamill in a possible new Star Wars series.

Fans probably won’t see Mackie and Stan as their respective Avenger characters any time soon as Marvel already has a pretty crowded slate. The move back to the big screen will come with the Hollywood movies Black Widow (2021), followed by Shang-Chi and the Legend of the Ten Rings (2021), Eternals (2021), and Spider-Man: No Way Home (2021) closing out the year. If you like the comfort of your sofa, though, Loki is coming next month with Tom Hiddleston reprising his role as the God of Mischief.

Marvel fans will likely see the new Captain America and Winter Soldier appearing in Captain America 4, however. The new MCU movie — which is headed for Phase 5 — is being written by The Falcon and the Winter Soldier creator, Malcolm Spellman. The whereabouts of Steve Rogers and the future of the Captain America legacy will hopefully be explored in the fourth installment of the star-spangled hero franchise.

Do you think Sam and Bucky should be romantically involved?