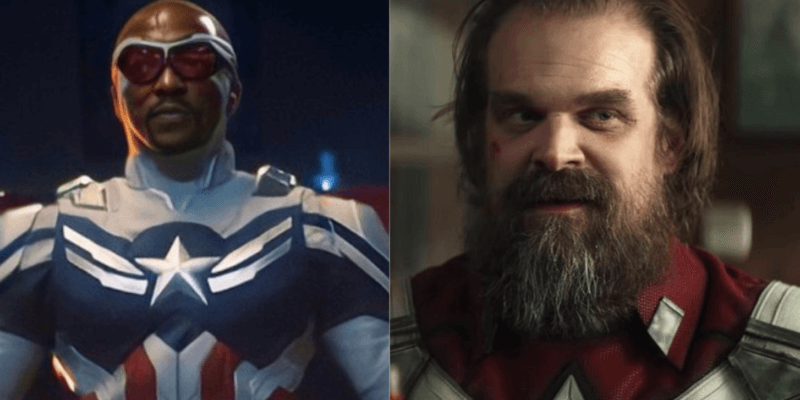 Despite the mixed reviews that Black Widow (2021) has received since it debuted on July 9 — following a year-long delay due to the COVID-19 pandemic — Marvel fans have still been enjoying Natasha Romanoff’s (Scarlett Johansson) backstory and their first MCU introduction to Alexei Shostakov/The Red Guardian (David Harbour).

In the Marvel universe, The Red Guardian was a super soldier, the Soviet Union’s answer to Captain America. Now that Marvel Cinematic Universe fans have introduced Harbour’s Alexei, fans can’t seem to get enough.

First, FilmFan asked “Will we ever see the return of Red Guardian? #BlackWidowWatchParty”, to which Feige responded:

I certainly want too [sic: to] – KF #BlackWidowWatchParty

Then, things really got interesting when a social media user named Harper asked, “Are we ever going to see a showdown between Sam Wilson’s Captain America and Alexei’s Red Guardian? #BlackWidowWatchParty”.

Feige tagged both Anthony Mackie and David Harbour and answered, cryptically (as always):

For those who may have missed the fact that Steve Rogers (Chris Evans) is no longer the MCU’s Captain America, The Falcon and the Winter Soldier series — which aired between Elizabeth Olsen and Paul Bettany’s WandaVision and Tom Hiddleston and Owen Wilson’s Loki on Disney+ — saw Mackie’s Sam Wilson/Falcon take-up the mantle for the foreseeable future.

Now that the Marvel Multiverse has officially arrived in Loki, anything is possible in the future. Plus, we already know that Mackie is seemingly set to reprise his role as Captain America in Captain America 4 — and Harbour has indicated he would love to return as Alexei, even telling Variety:

Only time will tell when we see these Marvel characters again — but Feige is certainly open to sharing more of their deeply connected story.

Would you like to see a showdown between Captain America and The Red Guardian?