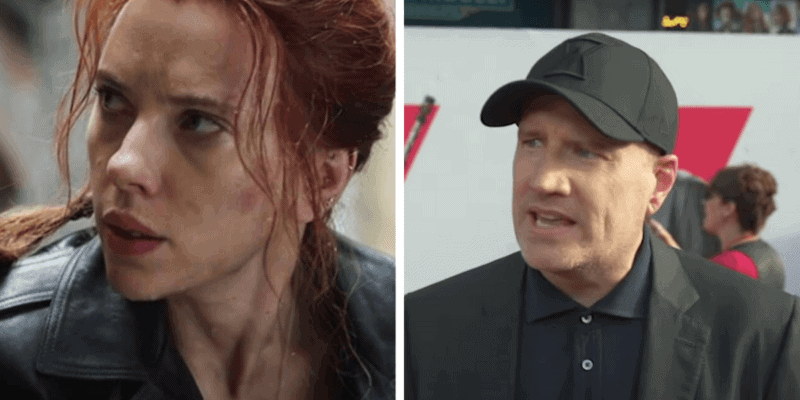 At the premiere of Marvel’s Black Widow (2021), studio chief Kevin Feige revealed a major Marvel Cinematic Universe character introduction had to be reworked due to the global pandemic.

The Marvel Studios Boss admitted that while Marvel’s Phase 4 rollout didn’t change much — even in the face of COVID-19 — one Easter egg intended for the long delayed Black Widow directed by Cate Shortland was instead deployed on the Disney+ streaming series The Falcon and The Winter Soldier.

“Truth,” Episode 5 of the wildly popular The Falcon and The Winter Soldier series, threw Marvel fans a curveball by introducing the prolific, Emmy-winning star of Veep and Seinfeld, Julia Louis-Dreyfus into the role of an acerbic, darker Nick Fury-style character. The addition of Julia Louis-Dreyfus to the Marvel Cinematic Universe as Contessa Valentina Allegra de Fontaine — Val for short – in Falcon and Winter Soldier  was well received by Marvel fans.

“There’s also an Easter egg that originally was going to appear first in Black Widow and then show up in The Falcon and the Winter Soldier and because of the pandemic, the only thing within our Phase 4 that was twisted a little bit. So, for fans that watch Falcon and the Winter Soldier, there’s something waiting for them as an Easter egg in this one.”

Marvel fans immediately began to speculate that the Easter egg Feige referenced — though didn’t confirm — is the appearance of Louis-Dreyfus’s Contessa. According to a report from Vanity Fair, Marvel had originally filmed something with Julia Louis-Dreyfus for Black Widow. However, after the pandemic led to a delayed release of Black Widow, the Easter egg will now callback to Falcon and the Winter Soldier — starring Anthony Mackie as Sam Wilson and Sebastian Stan as Bucky Barnes — instead of foreshadow it. The inclusion of the Contessa makes perfect sense, given the character’s penchant for spy games and espionage in Marvel Comics, mirroring the life of Natasha Romanoff.

In another nod to Julia Louis-Dreyfus’s likely inclusion as Val in Black Widow, Marvel boss Kevin Feige recently took a playful jab at another Marvel actor who has seemingly confirmed his appearance in Spider-Man: No Way Home (2021).

When asked by Entertainment Tonight, if Marvel fans could expect to see more of Julia Louis-Dreyfus in the Marvel Cinematic Universe, Feige quipped, “You should ask Alfred Molina.” This was a reference to the Spider-Man 2 (2004) actor spoiling his inclusion in Marvel’s multiverse exploring Spider-Man 3.

Marvel’s Black Widow has had several near-misses with bombshell spoilers in the news recently. Jimmy Kimmel gaffed when he accidentally revealed the full name of Rachel Weisz’s character — Melina Vostokoff — something that the visibly shaken actress wasn’t so sure the host was meant to reveal. O-T Fagbenle has also teased the reveal of a major villain in recent interviews, as fans speculate his identity as the villainous Taskmaster.

Are you psyched to hopefully see more Julia Louis-Dreyfus in the Marvel Cinematic Universe? Let’s hear from our Black Widow fans in the comments!