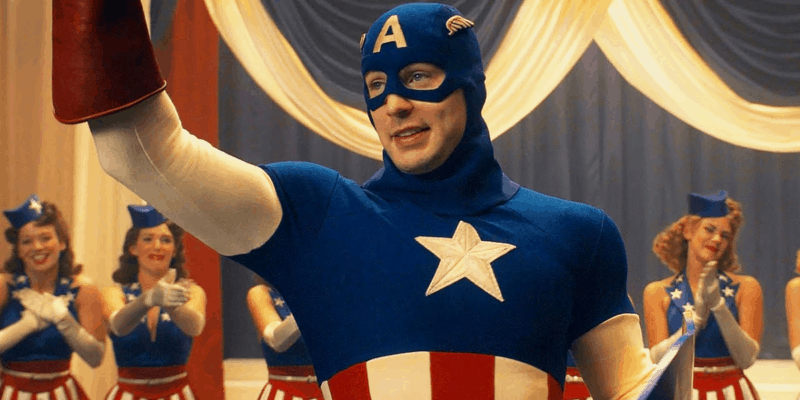 Marvel’s What If…? on Disney+ has explored some pretty dark corners of the Multiverse — a Marvel Zombies timeline, a timeline with Hank Pym (Michael Douglas) as an Avengers serial killer, and even a reality with a composite Vision/Ultron wielding the Infinity Stones.

According to the showrunner for the animated steaming series, Marvel Studios will leave one of the darkest subjects out of the Marvel Cinematic Universe for now — politics.

The Marvel Cinematic Universe has occasionally brushed up against political issues, but the most successful film franchise in history has largely done its best to stay out of polarizing political commentary. Even the critically-adored Captain America: The Winter Soldier (2014) — hyped as a “political thriller”– used the tropes of the genre rather than taking any kind of partisan stance.

With the current state of popular culture arguably more politically-charged and issue-aware than ever before, Marvel Studios and Disney tend to tow the center line publicly so as not to disrupt the bottom line. As negative comments by Shang-Chi actor Simu Liu were brought to light, the release of Shang-Chi and the Legend of the Ten Rings in China — the world’s largest movie marketplace — remains threatened. This is exactly the type of situation Marvel Studios and studio president Kevin Feige want to avoid.

Writer and Executive Producer of What If…? A.C. Bradley on the story Marvel rejected

Appearing on Deadline’s Hero Nation podcast, the What If…? showrunner A.C. Bradley was asked about which stories from the Marvel Comics series were considered for adaptation — specifically a classic story published in What If? Vol.1 way back in 1981, “What If Captain America Had Been Elected President?”.

Bradley shared that she wanted to produce a version of the story in either the first 9-episode run of What If…? or the upcoming Season 2, saying,

“This was an episode I pitched both seasons, and I doubt it’s ever going to be made… I wanted to do Captain America meets West Wing more than anything… I wanted the walk-and-talks, I wanted the full Aaron Sorkin treatment. We were playing around with it for ages. It was just something we did over beers, me and [writer] Matt [Chauncey] because we’re huge Sorkin-heads. But it was always one that hit the cutting-room floor. It’s a super talky episode… there’s not a lot of action.”

Bradley’s comments on her dream episode of What If…? mainly focused on her admiration for Aaron Sorkin’s The West Wing series, which ran on NBC from 1999-2006. However, audiences familiar with The West Wing — starring Martin Sheen as President Bartlett — know that the show has a famous liberal bent. Sorkin himself is a vocal supporter of Democratic ideals, and the subject of the show itself is an explicitly Democratic administration.

At a time when the U.S. is so politically divided, Marvel Studios may not want the risk of defining the political beliefs of one of the most universally beloved characters in Captain America, Steve Rogers. The character, made famous in the Marvel Cinematic Universe by Chris Evans, is voiced by Josh Keaton in What If…?.

The 2021 Marvel Comic arc The United States of Captain America caused a bit of a controversy on the far-right of the political spectrum. One-time Superman actor Dean Cain came under-fire for bashing recent Captain America comics as an attempt to “indoctrinate” children. The stories depicted Steve Rogers as a man with nuanced worldviews, rather than the symbol of unabashed patriotism the character represents to some.

Related: Marvel’s ‘What If…?’ Director Calls For Captain Carter Movie

Appearing on Fox & Friends, the actor said of the Captain America comics, “I am so tired of all this wokeness and anti-Americanism.” Fans of Marvel Comics were quick to point out that this characterization of Steve Rogers completely missed the mark. Cain later admitted he had never read the Marvel comic.

“What If Captain America Had Been Elected President?” Marvel Comic

In the original comic storyline, “What If Captain America Had Been Elected President?,” Steve Rogers is elected President as a third-party candidate — defeating Republican candidate Ronald Reagan and Democratic nominee Jimmy Carter in a landslide.

The story jumps ahead a few years into his term to a time when Steve Rogers has led the implementation of a solar satellite system that relieves America of dependency on foreign oil. President Rogers also signs off on a military coup that arms revolutionaries in the country of San Pedro with solar-powered weapons to topple the sitting dictatorship. However, it is revealed that the Red Skull has seized control of the newly installed San Pedro government, and plans to use the solar satellite to obliterate Washington DC.

The story ends with President Steve Rogers — captured by the Red Skull in San Pedro — turning the laser onto the Red Skull’s compound instead of DC. President Rogers and the Red Skull both perish in the blaze, and the only thing recovered from the wreckage is Cap’s vibranium shield.

Marvel’s What If…? Season 1

Once thought of as an anthology series presenting one-off stories based on MCU characters, Marvel’s What If…? appears to be building toward a crossover that would assemble the Guardians of the Multiverse. Bringing together characters from the seemingly stand-alone episodes like Party Thor (Chris Hemsworth), Doctor Strange Supreme (Benedict Cumberbatch), Captain Carter (Hayley Atwell), T’Challa Star-Lord (Chadwick Boseman) into a single force, The Watcher (Jeffrey Wright) may be cherry picking timelines for heroes to defend the Multiverse.

Marvel boss Kevin Feige has confirmed that Season 2 of Marvel’s What If…? is already in the works and is likely to premiere sometime in 2022.

Would you like to see a President Captain America in the What If…? Multiverse? Let us know in the comments!

Comments Off on Marvel Rejected Political ‘What If…?’ “President Captain America” Episode