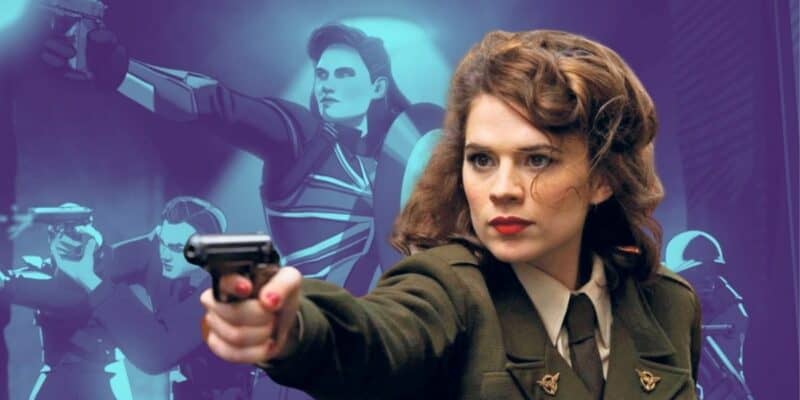 Actress Hayley Atwell — well-known in the Marvel Cinematic Universe for portraying Captain America (2011) character Agent Peggy Carter — has signed on to voice a legendary hero in a new animated Netflix series. The series will be based on the popular Tomb Raider video game and film franchise with Marvel actress Hayley Atwell voicing the iconic heroine, Lara Croft.

The Netflix and Legendary anime Tomb Raider series has tapped Atwell as Lara Croft for the project that was first announced in January. The series will feature a storyline that picks up after the events of the video game’s recent reboot trilogy from Square Enix. Angelina Jolie first brought the adventurous treasure hunter Lara Croft to film in Lara Croft: Tomb Raider (2001) and its sequel Lara Croft: Tomb Raider: The Cradle of Life (2003). Jolie is set to debut in the Marvel Cinematic Universe in Eternals (2021) this November.

Hayley Atwell recently made waves as she reprised her role of Peggy Carter in the Marvel Cinematic Universe by voicing Captain Carter on the premiere episode of Disney+ series What If…?. The episode featured an alternate timeline that imagined how events might have unfolded if Peggy Carter had taken the super soldier serum instead of the Sacred Timeline’s Captain America, Steve Rogers.

The well-received episode led to speculation — and wishful thinking — by Marvel fans that Hayley Atwell could return to the Marvel Multiverse as Captain Carter in future projects, like Avengers 5. Even the director of Marvel’s What If…?, Bryan Andrews, wants to see a Captain Carter movie fronted by Atwell’s Peggy Carter.

Atwell’s memorable turn as the voice of super soldier serum-powered Captain Carter is just the latest turn for the actress in the Marvel Cinematic Universe. Atwell first played Steve Rogers’s (Chris Evans) love interest in 2011’s Captain America: The First Avenger. The popularity of the character led to a well-received ABC special one-shot Agent Carter, which led to an Agent Carter series that ran for two seasons from 2015 to 2016.

Hayley Atwell also appeared as Agent Carter on the big screen in Captain America: The Winter Soldier (2014), Avengers: Age of Ultron (2015), Ant-Man (2015), and in that memorable reunion with Steve Rogers in Avengers: Endgame (2019).

Do you want more of Hayley Atwell as Agent Peggy Carter — or Captain Carter — in the Marvel Cinematc Universe? Let us know in the comments!