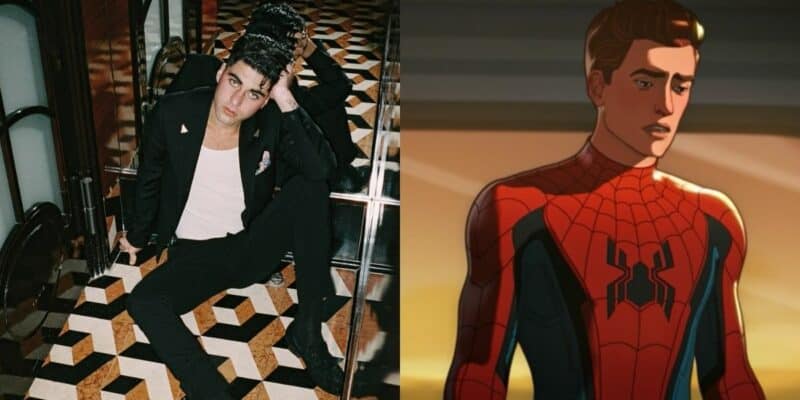 Spider-Man: No Way Home (2021) may be right around the corner and with multiple Spider-Man actors rumored to return for the Marvel movie, it may be easy to miss the newest Peter Parker in the MCU — Hudson Thames.

Thames stars as the web-slinging hero in Marvel’s What If…? animated series, and the voice actor has just addressed how he approached the role that Holland made incredibly popular in the live-action MCU.

Bringing back a massive slate of characters — you can see them all here, Marvel’s What If…? is quickly storming towards its Season 1 finale. The latest outing from Kevin Feige’s Marvel Cinematic Universe gathers this immense cast in an anthology series that explores the various timelines in the Marvel Multiverse. What If…? debuted on August 11 and has already proven to be a new fan-favorite project from Marvel Studios.

In addition to many of the MCU’s actors reprising their roles for What If…?, the new series also welcomes a plethora of new talent to voice these popular comic book characters. Alexandra Daniels takes on Captain Marvel instead of Brie Larson, and Mick Wingert voices Tony Stark. It’s not surprising that Robert Downey Jr. isn’t back considering his long tenure with Marvel Studios is up, but Larson’s absence is surprising considering her upcoming Phase 4 movie, The Marvels (2022) is currently in production.

Joining Daniels and Wingert are other voice actors like Josh Keaton (Steve Rogers), Beth Hoyt (Pepper Potts), Lake Bell (Black Widow), and Fred Tatasciore (Drax the Destroyer). Interestingly, while What If…? director Bryan Andrews alluded to scheduling contracts being the reason behind some actors not returning, live-action Drax actor, Dave Bautista, had a rather shocking response to his lack of inclusion in the animated series.

Then there’s Hudson Thames. The MCU’s new Spidey debuted in Episode 5 (“What If…Zombies?!”) which saw the series tackle a storyline reminiscent of Marvel Comics’ Marvel Zombies arc. After Hank Pym (Michael Douglas) and Janet van Dyne bring back a virus from the Quantum Realm, and the Avengers fall, a team including Spider-Man and Okoye (Danai Gurira) rise up to save the planet from the zombie hordes.

Recently, Thames spoke out about the role and the secretive nature behind the Marvel production, now the actor is addressing tackling Holland’s beloved MCU role.

“At first, I was definitely trying to sound like Tom [Holland], and then I realized it wasn’t going to be a few lines. [I realized] it was going to be me having to find an identity with that character, so I kind of threw that away and did my thing with it.

Serendipitously, we sound a bit similar. As I kept going in more and more for more sessions on the episode, I was like, ‘Oh, this is an opportunity to live in this character a little bit’ and have fun with it.”

Despite Holland being in the MCU since Captain America: Civil War (2016), it was Thames’ Spider-Man that first mentioned the historic comic book character, Uncle Ben, for the first time ever in the MCU. Thames goes on to say that he has not connected with Holland:

“I did go through some of the other movies, more to find the playfulness and energy that he brought, because I think it is fantastic. I still haven’t talked to the guy (Tom Holland) but we are in all of these Instagram group chats people keep throwing us in together saying, ‘you guys gotta hand out!’. But no, we haven’t connected and I am sure at one point we will.”

What If…?‘s Spider-Man actor ends with a powerful statement:

“But I think he is such an awesome Spider-Man and, like you said, it is every kid’s dream. And I think his Spider-Man, because there have obviously been so many iterations, is young in the best way. It brings a hopefulness that I think the teenage child actor could say, ‘Oh, I could be that guy.'”

In fact, it seems that some of the “guys” that have played Spider-Man before may actually enter the MCU’s Marvel Universe sometime soon. Rumors have been swirling for a while now that Tobey Maguire and Andrew Garfield will reprise their roles from Spider-Man (2002-2007) and The Amazing Spider-Man (2012-2014), respectively, in Spider-Man: No Way Home, but that remains to be seen.

Holland’s absence from What If…? has never been fully explained but executive producer, Brad Winderbaum, suggested that it could be down to the actor’s contractual agreements with Sony Pictures — the studio that Marvel Studios shares Spider-Man with.

Thames does manage to capture the youthful energy of Holland’s Peter Parker, and with fan reactions remaining strong for the new series, there could be yet another prominent Spider-Man Avenger in the Marvel Cinematic Universe.

Scratch that — the Marvel Cinematic Multiverse.

What did you think of Hudson Thames as Spider-Man? Let us know in the comments!