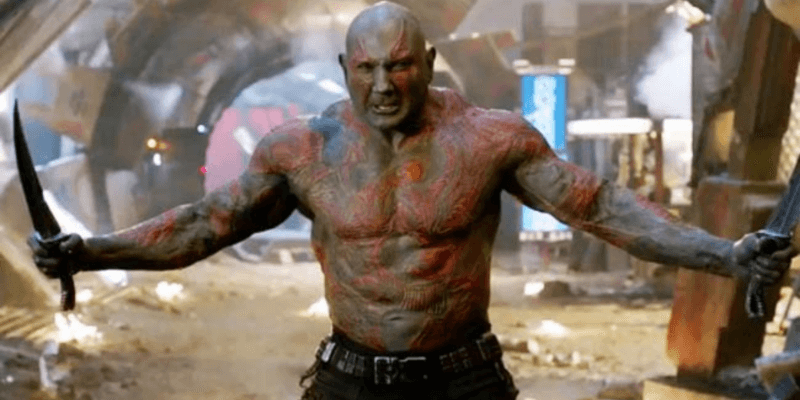 If there is one Marvel actor that isn’t afraid to speak out, it’s Dave Bautista. The former professional wrestler has always been vocal when it comes to the inner workings of The Walt Disney Company and Marvel Studios, offering his own opinions on various political and sometimes controversial topics surrounding the entertainment powerhouses.

Bautista shows no sign of changing. A recent Marvel casting announcement has been both celebrated and questioned by fans, and in response to a recent question, the action star revealed some rather shocking information.

Dave Bautista first arrived in Kevin Feige’s Marvel Cinematic Universe in James Gunn’s Guardians of the Galaxy (2014) before returning in the sequel, Guardians of the Galaxy Vol. 2 (2017). His comedic turn as Drax the Destroyer was a hugely celebrated element of Gunn’s ragtag team-up Marvel movie. The Guardians, of course, came back in the Infinity Saga conclusion of Phase 3, Avengers: Infinity War (2018) and Avengers: Endgame (2019).

Bautista joined an ensemble of actors in the Guardians Marvel movies which helped cement the popular status of the MCU films. Chris Pratt (Peter Quill/Star-Lord), Zoe Saldana (Gamora), Bradley Cooper (Rocket Raccoon), Vin Diesel (Groot), and Karen Gillan (Nebula), among others, all starred as the titular Guardians. While the next installments in Gunn’s franchise are over a year away, Marvel fans can see the characters again soon in the upcoming animated series, What If…?, with most of the MCU’s cast returning to voice their animated counterparts — emphasis on most.

Despite having future commitments with Marvel Studios, Bautista has recently revealed in a rather surprising fashion that he will not be starring in the next Marvel television project. In response to a fan question over why he wasn’t voicing Drax — the actor was not featured in the full cast announcement –, Bautista replied;

Let’s start with I was never asked.

Let’s start with I was never asked. https://t.co/HwrnMrEajh

This response is shocking, to say the least, and with Bautista not adding any other context, it seems to be a rather salty reply. Disney nor Marvel have issued a statement on the reasons behind

The Drax star won’t be the only one not reprising their character for What If…? Chris Evans and Robert Downey Jr. won’t be back as Steve Rogers/Captain America and Tony Stark/Iron Man, respectively. This isn’t that much of a shock considering that both of the original Avengers actors have finished their contract with Marvel Studios. However, as with Drax, characters like Captain Marvel (Brie Larson) and Black Widow (Scarlett Johansson) are being voiced by new actors. The latter actor is currently locked in a controversial lawsuit with Disney over the release of Cate Shortland’s Black Widow (2021).

There were reports that Benedict Cumberbatch wouldn’t be back as Doctor Strange, but now the actor is confirmed to return.

This Drax casting news might come as a shock to Marvel fans, but even for insiders, it is also creating huge waves as seen by James Gunn’s reply to Bautista.

Bautista has shown fervent loyalty and support for his director over the years especially after Disney fired Gunn due to resurfaced controversial social media posts. Gunn was quickly snapped up by Warner Bros. to direct the DC Extended Universe movie’s, The Suicide Squad (2021).

Announced with a trailer recently, What If…? debuts on August 11 and will be Marvel’s first animated television series. Based on a Marvel Comics series of the same name, it will offer an alternate look at some of the MCU’s most defining moments. The new project will feature nine episodes all tackling a different “what if?” moment in an alternate reality.

From Hayley Atwell’s return as Peggy Carter AKA Captain Carter to the late Chadwick Boseman’s emotional final outing as T’Challa — although here he will be the newest Star-Lord –, What If…? also welcomes Jeffrey Wright as Uatu AKA The Watcher in the huge cast of voice actors.

Will you be watching What If…? this August? Let us know in the comments!