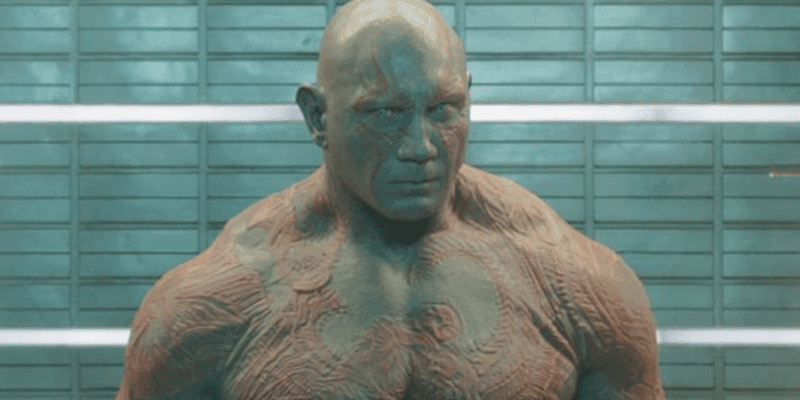 Can we all just agree as a society that the Marvel Cinematic Universe — and the actual universe — are better off with Dave Bautista’s Drax wearing clothes than they are with Dave Bautista quitting the Guardians of the Galaxy franchise over his character’s shirtless scenes.

Recently Drax the Destroyer actor Dave Bautista took to Twitter to implore writer and director of Guardians of the Galaxy Vol. 3 (2023) to finally give Drax some clothes in the upcoming Marvel film.

Director James Gunn is always good for some playful exchanges with fans and Marvel Cinematic Universe stars like Chris Pratt AKA Peter Quill on Twitter as he shares insights and behind-the-scenes updates. James Gunn is currently hard at work on the next chapter of Guardians of the Galaxy, and he recently shared that he was working on the tedious task of storyboarding Vol. 3, which is due out on May 5, 2023.

Actor Dave Bautista is also known for being forthcoming with his thoughts on his place in the Marvel Cinematic Universe in interviews and on social media. Recently, the actor candidly shared his lack of enthusiasm on Twitter regarding a fan casting of a future Fast & Furious project with Dwayne “The Rock” Johnson and John Cena, refusing to be “lumped in” with the fellow former pro wrestlers -turned-actors.

Bautista was every bit as direct when discussing the hellish number of hours spent in the gym and the makeup chair for his portrayal of Drax the Destroyer. In promotion of his recent hit movie for Netflix, Zack Snyder’s Army of the Dead (2021), Bautista lamented his shirtless plight in the MCU on Ellen, saying,

“I’m going to be 54 years old by the time Guardians 3 comes out, and the shirtless thing is getting harder and harder for me…”

Related: Dave Bautista Won’t Be “Lumped In” With John Cena or ‘The Rock’

Dave Bautista asks James Gunn to put clothes on Drax in Guardians of the Galaxy Vol. 3 (2023)

James Gunn replied to a Marvel fan on Twitter who heroically asked Gunn to put some clothes on Drax for the upcoming Guardians of the Galaxy Vol.3. Whether LONERSQUARE was interceding on behalf of Dave Bautista’s desire for a wardrobe upgrade or simply just curious to see Drax’s wild Marvel Comics look on-screen is unclear, but he did tag Bautista, Gunn, and Marvel Studios in his Tweet that read:

“@ Dave Bautista If you could negotiate things, then would you wear something like this? Would you shorten the cape? @ James Gunn @Marvel Studios @Marvel”

“That’s too much like what @DaveBautista wears in his regular life. #BautistaLoungeWear”

Bautista caught the exchange and leaped at the opportunity to convince James Gunn that the new costume would totally work in Guardians Vol. 3. He offered his advocacy for the Drax outfit change, saying,

“I still say it will translate on to screen! And save production the cost of wardrobe! Think about it!”

I still say it will translate on to screen! And save production the cost of wardrobe! Think about it! ??‍♂️ https://t.co/a2ihZhuIeH

Upcoming Guardians of the Galaxy projects

Dave Bautista has stated that he will be done portraying Drax the Destroyer following the completion of Guardians of the Galaxy Vol. 3, which will return cast Chris Pratt (Star-Lord), Zoe Saldana (Gamora), Bradley Cooper (Rocket Raccoon), Vin Diesel (Groot), Karen Gillan (Nebula), and Pom Klementieff (Mantis). The Guardians will also feature in upcoming Thor sequel, Thor: Love and Thunder (2022) starring Chris Hemsworth and Natalie Portman. You can also look forward to seeing Drax in The Guardians of the Galaxy Holiday Special in December 2022.

Do you want to see Dave Bautista’s Drax get a new wardrobe? Let us know in the comments if you think it can work in the MCU!