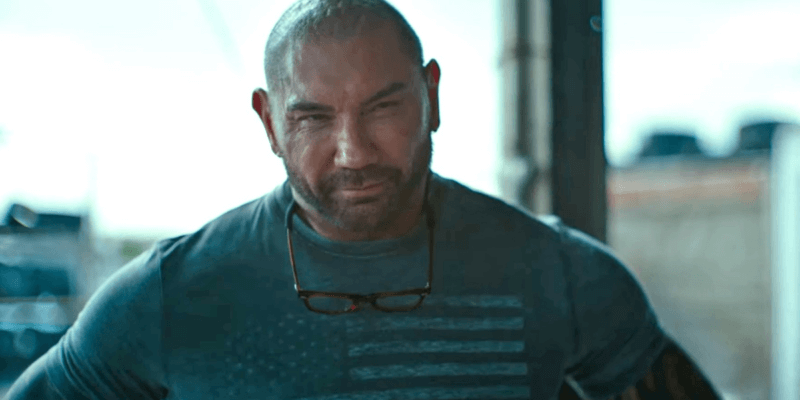 Actor Dave Bautista made waves recently when he publicly shot down the possibility of ever teaming up with Hollywood heavyweights Dwayne “The Rock” Johnson or John Cena on a movie. Now Bautista is doubling down on his unwillingness to share the screen with fellow WWE wrestlers-turned-thespians, but maintains it’s “nothing personal.”

Dave Bautista, best known for his role as Drax the Destroyer in Marvel’s Guardians of the Galaxy franchise has been outspoken about his desire to leave the Marvel Cinematic Universe following the completion of director James Gunn’s Guardians of the Galaxy Vol. 3, due out in May 2023. The 52-year old actor has also been candid about myriad other topics as he’s been promoting his upcoming projects Dune (2021), Knives Out 2 (2022), and his recent Netflix smash hit, Zack Snyder’s Army of the Dead.

Most recently Drax actor Dave Bautista offered clarification regarding his disinterest in joining John Cena or Dwayne “The Rock” Johnson in a movie. The Army of the Dead actor Tweeted an explanation for his remarks, with a gallery of photos from his film career, apparently to demonstrate his growing range as an actor:

“I figured a visual reference might help. I’d just prefer not to be lumped in. Nothing personal. #DreamChaser”

I figured a visual reference might help. I’d just prefer not to be lumped in. Nothing personal. ??‍♂️ #DreamChaser https://t.co/JFHAaw053F pic.twitter.com/djKZBylIuT

Bautista’s comments were originally brought about due to a John Cena interview. John Cena joined the Fast & Furious franchise with his debut in the hit actioner F9 (2021), a property that already features Dwayne “The Rock” Johnson. When asked about teaming with The Rock on a future Fast & Furious project, Cena said he’d “like to see it” — which of course led to internet piling-on that included adding Dave Bautista to that potent mix. Bautista’s short and sweet response to the suggestion: “Nah I’m good!!”

In addition to James Gunn’s Guardians of the Galaxy Vol. 3 from Marvel Studios, Dave Bautista (Drax the Destroyer) will appear alongside the rest of the Guardians cast — Chris Pratt (Star-Lord), Zoe Saldana (Gamora), Vin Diesel (Groot), Bradley Cooper (Rocket Raccoon), Karen Gillan (Nebula), and Pom Klementieff (Mantis) in the recently wrapped Thor sequel Thor: Love and Thunder (2022), as well as The Guardians of the Galaxy Holiday Special (2022) for Disney+.

Would you like to see Dave Bautista team up with John Cena and Dwayne Johnson on-screen? Let us know in the comments!