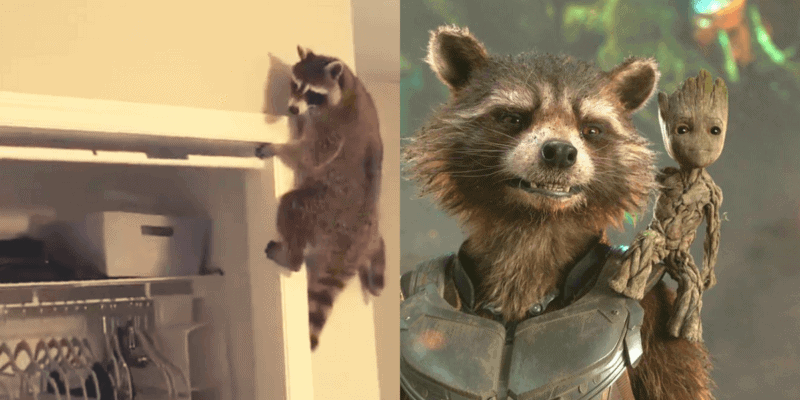 Marvel’s Guardians of the Galaxy director James Gunn has reached out to a young woman who had her life turned upside-down by a family of wild raccoons that invaded her home.

When director James Gunn — who famously brought Marvel Comics’ wise-cracking Rocket (Bradley Cooper) to the Marvel Cinematic Universe — heard about a Ph.D. student whose harrowing encounter with a pack of wild raccoons that left her home totally wrecked, he offered to help pay for the damage caused by the masked bandits.

Sharing the photos detailing her ordeal on Twitter over two days, Haley Iliff, a student at Florida State University said she returned home from a trip to find that raccoons had fallen through her ceiling and caused complete chaos. Her first Tweet featured a photo of a wrecked bedroom with a guilty-looking raccoon rummaging through Iliff’s closet, as she captioned,

“I came home from New York and a Raccoon fell through the roof above my bedroom (1/??)”

i came home from new york and a racoon fell through the roof above my bedroom (1/??) pic.twitter.com/RGedYqfQnN

The Guardians of the Galaxy director obviously has a soft spot for the mischievous trash pandas after bringing Marvel Comics Rocket Raccoon to life on the big screen in Guardians, voiced by Bradley Cooper and portrayed on-set by Gunn’s brother, Sean Gunn. Replying directly to Iliff’s Tweet of her ravaged bedroom, director James Gunn Tweeted,

“Let me know how much damage they’ve done & I’ll make a donation to help cover the costs. It’s the least I can do on behalf of my masked brethren.”

@haley_iliff I followed so you can DM.

James Gunn — currently in pre-production on Guardians of the Galaxy Vol. 3 due in theaters on May 5th, 2023 — also added that he followed Iliff so that she can direct message her response. As of this writing Iliff, it’s unknown if Iliff has taken James Gunn up on his offer of financial assistance. But, from the looks of some of these photos and videos, Iliff is going to need James Gunn’s help to redecorate. In a series of Tweets, Iliff shared one photo of her completely destroyed bedroom, saying,

“They trashed my room, who knows what else they’ll do before we get them out. No idea how much this is going to cost me. At the very least I’ll need new sheets.”

Iliff added further information about how one raccoon became many raccoons as the critters continued to infiltrate her space, saying,

“Since the roof is open to the sky, we have a multiplying raccoon problem. Last count was 5 raccoons and they found their way to the office upstairs as well.”

they trashed my room, who knows what else they’ll do before we get them out. no idea how much this is gonna cost me, at the very least i’ll need new sheets pic.twitter.com/rbmYL0MlkB

Iliff says her local Humane Society couldn’t help her due to the legalities of intervening with a raccoon momma protecting her young, so the raccoon family squatted at her place for nearly two days before Iliff found someone who could safely remove them.

Guardians of the Galaxy Vol. 3 was written years ago by James Gunn, but the director was fired from his role as Guardians helmer in 2018 by Disney following the resurfacing of offensive Tweets. Gunn’s reinstatement to the Marvel Cinematic Universe came not long after, but the delay combined with the global pandemic has let Marvel Studios to shuffle Guardians Vol. 3 timeline a bit.

You can also catch the Guardians appearing alongside Chris Hemsworth in the recently wrapped Thor: Love and Thunder (2022), and in The Guardians of the Galaxy Holiday Special (2022). You can also check out director James Gunn’s adventures into another universe — Warner Bros.’ DCEU — with the upcoming The Suicide Squad (2021) starring Idris Elba and Margot Robbie and the HBO Max  Peacemaker starring John Cena.

You can catch up on the adventures of Rocket Raccoon on Disney+, and hopefully not your bedroom or office!

What would you do if you came home to a family of raccoons destroying your house? Would you call director James Gunn? Let us know in the comments!

Comments Off on James Gunn Covers Damage to Woman’s Home After Raccoon Invasion!