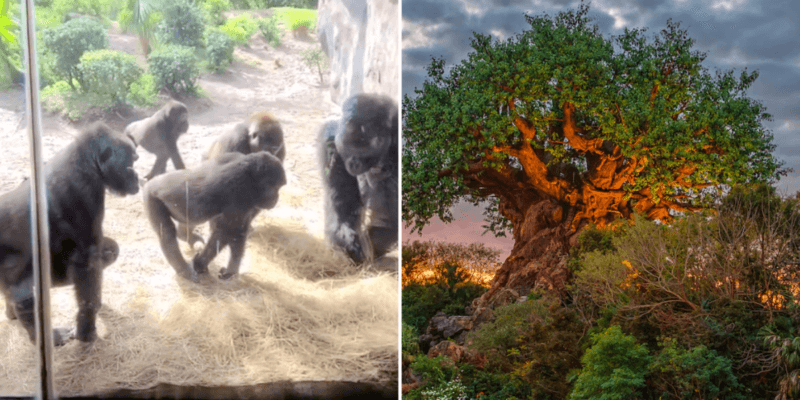 When a Guest visits the Walt Disney World Resort in Orlando, Florida there are a plethora of things to do. Whether it’s a trip to Cinderella Castle in Magic Kingdom, Star Wars: Galaxy’s Edge at Disney’s Hollywood Studios, or the World Showcase in EPCOT, the Disney Resort can pretty much cater to any interest. And that’s not to mention the retail extravaganza at Disney Springs.

Disney’s Animal Kingdom not only delivers enchanting experiences like Avatar Flight of Passage in Pandora, A Celebration of Festival of the Lion King, and the quaint Discovery Island, but it brings Guests up close and personal with a wide range of wildlife. And, this week, some Guests visiting this Disney Park got more than they bargained for while strolling the Gorilla Falls Exploration Trail.

Nestled away in Africa at Disney’s Animal Kingdom, the Gorilla Falls Exploration Trail offers Guests a chance to “salute [their] resident troop of gorillas”. Committed to conservation practices, Guests visiting Disney’s gorilla experience can learn more about the world’s biggest primates in a life-like “natural” habitat.

To continue Guests’ conservation education, Animal Kingdom visitors can take a trip to the Conservation Station at Rafiki’s Planet Watch to get an in-depth look at Disney’s animal care.

Well, this week Guests certainly got to see a lot of action from the gorillas of Animal Kingdom as the group discovered something else had managed to get into their enclosure — and no, not a Cast Member. A snake had somehow got lost in their home and the gorillas were more than curious to discover why this stowaway was in their habitat.

In a now-viral TikTok from Bearded Kraken (@silkystrokesurvivor), the moment with the exotic animals was captured in a two-part special — did someone say Godzilla vs. Kong?

The footage — which has now been viewed almost five million times — sees a young gorilla idly sitting at the glass window when something catches its eye. It circles around slowly, not quite sure what hides in the straw at the corner of its home. Soon after, another gorilla approaches to join the search and that’s when chaos erupts.

Guests can be headed shouting “there’s a snake!” while the action unfolded. The small reptile was too quick for the gorillas but that didn’t stop the whole troop — including what looks like the silverback — crowding around the snake. In the video, a Cast Member is heard saying how “just like humans, our gorillas are very curious about what goes on in their habitat”. Gorillas are known to be incredibly intelligent species of wild animals.

The Cast Member’s quick explanation at the gorilla attraction shows how Disney constantly provides the Guests with the best educational experience no matter how surprising the events are.

A second video was posted shortly after which shows the gorillas getting even more up close with the reptile.

The best thing about Disney’s Animal Kingdom is that you never truly know what is going to happen while visiting the animal attractions at the Florida theme park — like how these otters decided to play with a Lightning McQueen toy! And if you truly want that authentic wildlife experience, one of Disney’s top attractions is Kilimanjaro Safaris which offers a “truly wild adventure” over the African savannah.

Disney Parks recently a catalog of new experiences coming to the Resort to create an unparalleled theme park experience during The World’s Most Magical Celebration.

Disney KiteTails was announced as a new Animal Kingdom show to celebrate the opening of the Walt Disney World Resort 50 years ago. The official description of the show is as follows:

Your next Disney World vacation just got a whole lot more exciting!

Have you ever witnessed any strange animal encounters? Let us know in the comments!