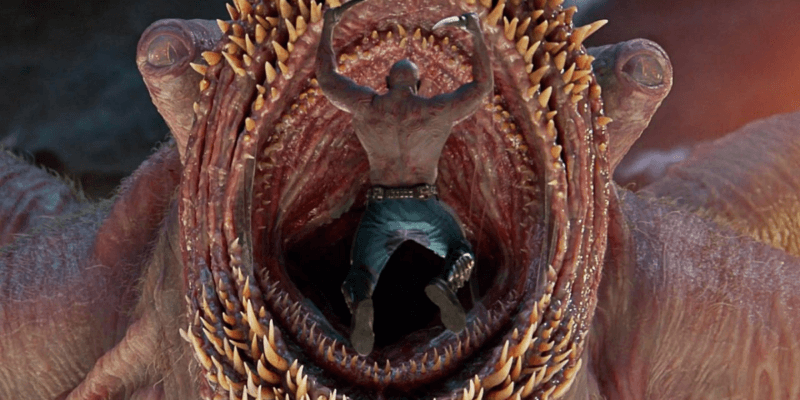 Keen-eyed fans of James Gunn’s Guardians of the Galaxy film series may have just pieced together the confirmed death of a beloved Marvel Cinematic Universe character. Actor Dave Bautista has made it clear that he does not intend to return to the role of Drax the Destroyer following the completion of the James Gunn helmed Guardians of the Galaxy Vol. 3, due in theaters on May 5, 2023. Citing his age and a feeling that Marvel Studios may have “dropped the ball” with his Drax the Destroyer character, Dave Bautista has given every indication that he’s ready to move on. However, fans hoping for a happy ending for the hilariously literal behemoth may be disappointed if this latest fan theory proves true.

Fan theory that Drax will die in Marvel’s Guardians Vol. 3

The title card for Marvel’s Guardians of the Galaxy Vol. 3 (2023) features a mottled grey hue, similar to the skin color of Drax (Dave Bautista). The logo also features red brackets bringing to mind the red tattoos that cover the body of Drax. If the fan theory is correct, and the pattern holds then Marvel is already foreshadowing the death of another fan-favorite character in Drax. Check out the original Instagram post below:

Who dies in Marvel’s Guardians of the Galaxy?

Each of the first two entries of the Guardians of the Galaxy trilogy has ended with heroic self-sacrifice on behalf of a major character. in Guardians of the Galaxy (2014), Groot (Vin Diesel) surrounds his friends with his own body to help them survive a high-impact spaceship crash. In doing so, Groot is destroyed. While Guardians ends with the introduction of “Baby Groot,” a seedling grown from the body of the deceased Groot, he is considered to be the offspring of Groot rather than a kind of reincarnation or revival.

In Marvel’s Guardians of the Galaxy Vol. 2, Yondu (Michael Rooker) — the Ravager who became the adoptive father of Peter Quill (Chris Pratt) — saves Star-Lord during an escape from his birth father Ego by giving Quill his own air supply in open space. This sacrifice cost Yondu his life but saved his adoptive son.

In keeping with this pattern, could we see MCU’s Drax sacrificing his life to save his friends, his team, or potentially some yet-to-be-seen offspring?

In addition to Guardians of the Galaxy Vol. 3, Drax (Dave Bautista) will appear alongside the rest of the Guardians cast — Chris Pratt (Star-Lord), Zoe Saldana (Gamora), Vin Diesel (Groot), Bradley Cooper (Rocket Raccoon), Karen Gillan (Nebula), and Pom Klementieff (Mantis) in the recently wrapped Thor sequel Thor: Love and Thunder (2022), as well as The Guardians of the Galaxy Holiday Special (2022) for Disney+.

Do you think Drax will meet his death in Guardians Vol. 3? Or do you want more Dave Bautista in the Marvel Cinematic Universe? Let us know in the comments!

Comments Off on Is Marvel Secretly Teasing Death of Drax in ‘Guardians Vol. 3’?