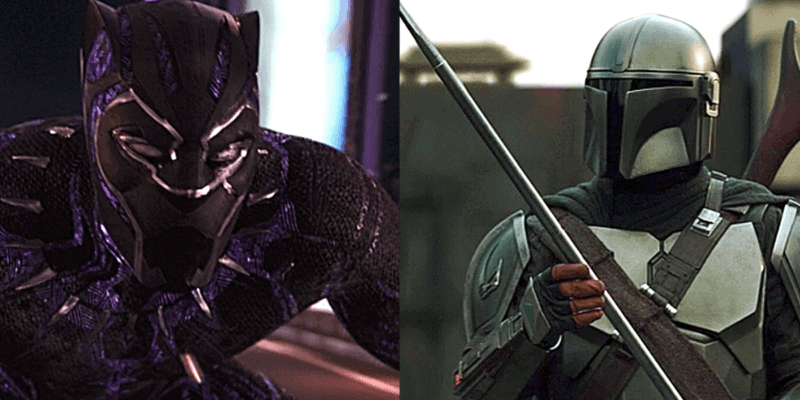 The virtually unbreakable metal used in the wondrous technology of Wakanda — vibranium — has become legendary in the Marvel Cinematic Universe.  The Star Wars steel featured prominently in The Mandalorian — beskar — is highly sought-after by bounty hunters all over the galaxy. How do the super-strong fictional metals compare?

Thousands of years ago, in the Marvel Cinematic Universe timeline, a meteorite fell from the sky and crash-landed in the African territories that would come to be known as the nation of Wakanda. The meteorite is the only significant stockpile of vibranium on Earth, and it has been mined and synthesized into a malleable metal alloy by Wakandans for generations.

Technological advancements derived from the alien element led to Wakanda becoming the most technologically advanced nation on the planet. The people of Wakanda used vibranium technology in their everyday lives, as well as in their weaponry. Wakanda’s sworn protector, the Black Panther, wears a vibranium-weave super suit and is supported by the elite royal security team, the Dora Milaje armed with vibranium spears.

In order to protect their valuable vibranium resources, Wakanda was a fiercely isolationist country, rarely allowing outsiders to see their true technological superiority.

The most notable characteristic of vibranium in the Marvel universe is its ability to absorb and store kinetic energy. As it absorbs the vibrations from physical impact, vibranium actually becomes stronger. Black Panther (Chadwick Boseman) has also demonstrated the ability of vibranium to release massive amounts of stored kinetic energy to devastating effects.

Vibranium is stronger than steel and only a third of its weight, making it the ideal material to create a weapon like Captain America’s shield. The tensile strength and resistance to environmental drag enabled Steve Rogers (Chris Evans) to perfect the technique of hurling the vibranium alloy shield at high velocity with predictable targeting and ricochet.

In other words, Captain America’s shield could bounce off the noggins of more than a few HYDRA agents in a single toss and the shield would boomerang right back to Cap.

Notable Uses of Vibranium in the Marvel Cinematic Universe

Most recently Marvel fans have witnessed the amazing properties of vibranium alloy as Sam Wilson (Anthony Mackie) donned his new Captain America flight suit given to him by Wakanda — presumably designed by Shuri (Letitia Wright) — in The Falcon and The Winter Soldier series on Disney+. Bucky Barnes (Sebastian Stan) has also benefited from the out-of-this-world attributes of vibranium with his vibranium prosthetic arm.

In Wakanda, the Dora Milaje carry thin, durable vibranium spears as the traditional weapon of the fearsome security force. King T’Challa (Chadwick Boseman) as the Black Panther wears the Panther Habit — a highly advanced vibranium weave suit. In his role as protector of Wakanda, Black Panther is equipped with the latest vibranium technology. The Panther Habit is completely bulletproof and is able to absorb and store extremely large amounts of vibration through physical impacts that it can distribute later at the user’s discretion in the form of concussive pulses.

The latest Panther Habit is made up of vibranium nanobots — similar to those used by Iron Man (Robert Downey Jr.) with his “Bleeding Edge” armor featured in Avengers: Infinity War (2018) and Avengers: Endgame (2019) — that are ready to deploy at all times, stored in T’Challa’s ceremonial Wakandan necklace.

What is Beskar Steel?

Beskar ore in the Star Wars universe is only found on Mandalore, the homeworld of the Mandalorians in the Outer Rim Territories. Just as Wakandans closely guarded their vibranium supply and knowledge for generations, Mandalorians have kept the secrets of beskar within their clans. Also known as Mandalorian iron, Mandalore metal smiths cultivated secret techniques for beskar-working that enabled them to manipulate the hearty ore into a malleable alloy — used primarily in the legendary Mandalorian armor.

Even more impressive, beskar has proven its effectiveness even against the legendary Jedi weapon, the lightsaber. Capable of withstanding the incredible amount of heat produced by the kyber crystal and forming the lightsaber blade, Mandalorian warriors can fare quite well in the battle against Jedi Knights.

The Mandalorian references the “Mandalorian-Jedi War,” a conflict that took place thousands of years before the events of the series. Despite being ancient history, the Mandalorian-Jedi War is notable for shaping the worldview of Mandalore. The bitter conflict with the powerful Jedi and their use of the Force pushed the Mandalorians towards becoming the ultimate Jedi opponent. Their expertise in shaping beskar into virtually invulnerable armor, and lightweight, high-density weaponry made them the most fearsome, non-Force sensitive opponents that the Jedi had ever encountered.

The Mandalorian from showrunners Jon Favreau and Dave Filoni has provided audiences with new insight on the importance of beskar steel in the Star Wars universe. In The Mandalorian season 1, beskar is integral in moving the plot forward. The alloy is presented as so valuable, the Empire had taken to treating it as hard currency, like gold.

When Din Djarin (Pedro Pascal) is offered beskar ingots for his bounty hunting services, it sets him on the path to capturing his mark, Baby Yoda. Once he has the raw beskar forged into a new suit of armor, Djarin of course has a change of heart and goes back to rescue Grogu from the clutches of the Empire.

The famed bounty hunter Boba Fett wore customized beskar alloy armor often referred to as Durasteel, similar to the armor of his father Jango Fett. The modern form of Beskar was first introduced into Star Wars canon in an episode of Dave Filoni’s Star Wars: The Clone Wars, entitled “The Mandalore Plot.” The first we hear Boba Fett refer to his armor as being comprised of beskar is during his arc on The Mandalorian season 2.

Vibranium vs. Beskar: which is stronger?

Vibranium is a more versatile element, capable of use in not only defensive weapons and offensive projectiles but in nanobot technology capable of stimulating cell growth and repairing damaged cells. Of the two fictional metals, vibranium is far more effective at deflecting physical blows and absorbing forceful impacts. Vibranium’s ability to absorb and store kinetic energy makes it more adaptable rather than just durable.

When it comes to strength, however, beskar has got vibranium beat. Beskar steel is built to stand up to the extreme stress of high-intensity heat in order to fend off blaster fire and lightsaber strikes. This gives it far more resiliency against far greater stress than vibranium is capable of. It’s said that a lightsaber can produce temperatures of more than 45,000 degrees Fahrenheit. While vibranium is extremely durable, it has a melting point well under that of beskar armor, at 5500 degrees Fahrenheit.

To conclude the beskar vs. vibranium comparison, beskar is stronger than vibranium because it can handle more stressful conditions. But, perhaps we’ve only begun to scratch the surface of what vibranium is capable of in the Marvel Cinematic Universe. The possibilities -like Marvel’s upcoming slate of films – are endless. Then, of course, there’s adamantium… but that’s another story!

Which do you think would win in a fight? Let us know in the comments!