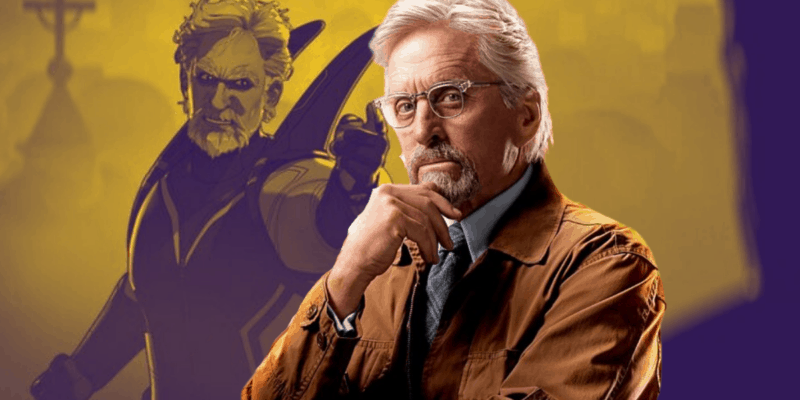 By the time Marvel Cinematic Universe fans meet Dr. Henry Pym (Michael Douglass) in Ant-Man (2015), the brilliant scientist is no longer the heroic S.H.I.E.L.D. ally he once was. Early in his career, Pym was a world-renowned physicist and entomologist who designed the Ant-Man suit to harness the power of the Pym Particle — his subatomic particles capable of scaling and reducing the mass of matter.

In Episode 3 of Marvel’s What If…? — “What If…The World Lost Its Mightiest Heroes?” — Marvel fans are introduced to an alternate version of old school superhero. This version is a deranged variant of the character pathologically set on revenge — which actually takes cues from Pym’s dark Marvel Comics origins.

What is the history of this brilliant scientist with a troubled past?

Who is Hank Pym in the Marvel Cinematic Universe?

In the 1960s of the Marvel Cinematic Universe timeline, Dr. Hank Pym acted as a field agent for S.H.I.E.L.D., operating as the original Ant-Man. Along with his wife, Janet van Dyne (Michelle Pfeiffer) — the original Wasp — Pym utilized his technologically advanced suits and Pym Particles to complete critical missions on behalf of the interests of S.H.I.E.L.D.

Hank Pym retired as Ant-Man following the loss of Janet van Dyne, who sacrificed herself to take down a Soviet Union ballistic missile — disappearing into the mysterious Quantum Realm. Upon retiring from the Ant-Man mantle — swearing to never wear the Ant-Man suit again — Pym learned that S.H.I.E.L.D. scientists, led by Howard Stark, had attempted to recreate Pym’s design without his consent. Pym felt betrayed by the organization and completely separated from S.H.I.E.L.D., founding Pym Technologies in the private sector.

In the events of Ant-Man, Pym was drawn into a conflict with Darren Cross (Corey Stoll). Cross, Pym’s one-time protegé at Pym Technologies, had managed to recreate his mentor’s Pym Particles. Cross planned to use the Pym Particles to create his own Yellowjacket Suits
— intending to sell them to HYDRA.
Pym had a complicated, troubled relationship with his daughter following the disappearance of Janet van Dyne. Pym’s daughter, Hope van Dyne (Evangeline Lilly), as board chairperson of Pym Technologies cast a deciding vote that removed Dr. Pym from the company he founded. At this time, Janet began working more closely with Darren Cross.

When Hope van Dyne uncovered Cross Technologies’ plan to create Yellowjacket suits for HYDRA, she reunites with her father and recruits Scott Lang (Paul Rudd) to use the Ant-Man suit to steal the Yellowjacket designs from Cross.
In a battle with Cross as Yellowjacket, Lang defeats the villain by transporting to the Quantum Realm and successfully returning — giving Pym and Hope van Dyne a blueprint for potentially rescuing Janet van Dyne.

What are Hank Pym’s powers and abilities?

According to Marvel Cinematic Universe Wiki, Pym, as Ant-Man, has the following powers and abilities:

Why does Janet know what a time vortex is?

Marvel fans know that time “passes differently” in the Quantum Realm. It also can apparently evolve the capabilities of those who spend sufficient time there unique abilities and insight. Having spent 31 years in the Quantum Realm, Janet has possibly witnessed some of the finer points of time travel in action — and perhaps even Multiverse timeline hopping.

The limits and possibilities of the Quantum Realm have yet to be fully explored in the Marvel Cinematic Universe.

How does Hank Pym turn evil?

In the Marvel Cinematic Universe, Yellowjacket is the name of the chief villain of Ant-Man (2015), Darren Cross. However, in the pages of Marvel Comics, Hank Pym has used the mantle of Yellowjacket during periods of mental instability that has brought him into conflict with the Avengers, and even his significant other Janet van Dyne.

Possibly as a result of his use of Pym Particles, the Marvel Comics Hank Pym frequently struggles with his mental health — often becoming unhinged and violent toward his Avengers teammates. One storyline featured Pym using excessive force against a foe that had surrendered to Captain America — an action that threatened his position on the Avengers. The possibility of losing his status as an Avengers sent Pym off the deep-end — ultimately leading him to create the superpowered evil robot Ultron to attack the Avengers.

That’s right, while Iron Man Tony Stark was mostly responsible for creating Ultron in the Marvel Cinematic Universe, it was a spiraling, paranoid Hank Pym who created Ultron in Marvel comics.

What are the alternative versions of Hank Pym?

In Episode 3 of the animated Disney+ animated series What If…? — entitled “What If… the World Lost Its Mightiest Heroes?” — we see a very dark version of Hank Pym as a deranged Yellowjacket that takes cues from his troubled comic book past. This episode presents a version of Hank Pym that has become a vengeful serial killer, systematically taking out Avengers candidates Iron Man, Thor, Hulk, and Black Widow before they have the opportunity to assemble.

Another Multiverse iteration of Hank Pym is the Earth-13584 version. In this reality, Pym works for an evil variant of Tony Stark. Pym is Iron Man’s chief scientist in charge of controlling captives with armored suits — enthralling them and forcing them to do the bidding of Tony Stark. We encounter this twisted version of Hank Pym in a Dark Avengers storyline in 2012.

Appearances of Hank Pym in the Marvel Cinematic Universe

As one of the brightest intellects in the Marvel Cinematic Universe, Hank Pym’s creation of the Pym Particles may prove to be one of the most important aspects of the MCU. So far, the Ant-Man suit and the Pym Particles have provided the basis for the Time Heist time travel plan in Endgame. That strategy ultimately reversed the snap of Thanos from Infinity War and ending the Infinity Saga.

The next frontier of the Marvel Cinematic Universe is the Multiverse, and it’s likely Hank Pym’s and Ant-Man’s understanding of the Quantum Realm will inform the way heroes can deal with an unlimited amount of timelines. The mysterious Quantum Realm has yet to be fully understood. Its exploration and secrets may well carry Marvel Studios Phase 4 and beyond.

What are the appearances of Hank Pym in the Marvel Cinematic Universe?

In order of the story, Hank Pym appeared in Avengers: Endgame during a time travel sequence that featured a de-aged Michael Douglas making a cameo as a 1960s era Dr. Pym. Marvel audiences first met Pym in Ant-Man in 2015, and the character was mentioned in 2016’s Captain America: Civil War (2016), before appearing in the Ant-Man sequel, Ant-Man and the Wasp (2018). Hank Pym will be featured in the third film in the Ant-Man series, the upcoming Ant-Man: Quantumania from director Peyton Reed — also starring Paul Rudd, Evangeline Lilly, and Jonathan Majors — due out in theaters on February 17, 2023.

Is Hank Pym the most brilliant mind in the Marvel Cinematic Universe? Let us know in the comments!