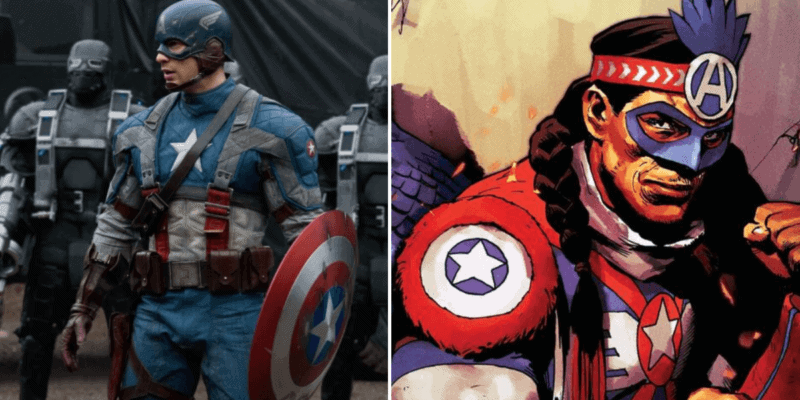 With Captain America news coming almost weekly, and Marvel fans urging to see the return of actor Chris Evans’ Steve Rogers, as well as find out the next steps in the story of The Falcon and the Winter Soldier, it’s easy to forget the huge legacy on which the character is built upon.

Debuting in 1941, the Captain America comic and its titular hero are celebrating their 80-year anniversary this year. Marvel’s star-spangled man is a fan-favorite, both in the comic books — where he was created by Jack Kirby and Joe Simon — and in the on-screen media audiences have seen over the years. Notably, though, it would be Evans’ tenure in Kevin Feige’s Marvel Cinematic Universe movie outings that would give the character a blockbuster reach.

It might not all be over for Steve Rogers though. The newly announced Captain America 4 project could bring him back into the fold. It’s likely, however, that the new Cap — Anthony Mackie’s Sam Wilson / Falcon — will lead the way in the fourth installment.

In the comic book world, though, the Captain America universe doesn’t stop to accommodate filming schedules and scriptwriting. Forging ahead with its The United States of Captain America series, — which has also given fans an LGBTQ+ Captain America in the form of Aaron Fischer and Nichelle Wright, a new Black female Avenger — Marvel is now introducing another new patriotic hero.

Who is the next Captain America?

The United States of Captain America comic books follows Steve Rogers as he rounds up heroes from across the USA. In the third issue of Christopher Cantwell and Dale Eaglesham’s Marvel Comics series, fans are introduced to the next star-spangled hero — Joe Gomez.

Joe Gomez is the Captain America of the Kickapoo Tribe. The Native American hero — who dons the red, white, and blue to protect his community — is introduced by Lipan Apache writer and Earth scientist, Darcie Little Badger, and Qalipu Mi’kmaq First Nation artist, David Cutler.

Little Badger – who wrote the multi-award-winning OwnVoices novel, “Elatsoe” (2020) – gave Marvel fans an insight into who Joe Gomez is:

“Joe Gomez is a construction worker, a builder in a world plagued by destruction. Every time a spaceship crashes into a bridge or a supervillain transforms a whole city block into rubble, people like Joe make things whole again. Work like that may seem thankless, but Joe genuinely enjoys helping his community survive and thrive.”

The writer went on to add:

“I know lots of people like Joe–many of them my Indigenous relatives–so it was wonderful to help develop a character with his values, strength, and extreme crane-operating skills.”

Artist Cutler told Marvel that getting to introduce the character was a special moment.

“I can’t really express the pride I feel being a part of the team that gets to introduce Joe to the world […] The Marvel Universe is the biggest stage there is, and bringing a new First Nations hero to that venue means more than I can say.”

As Cutler describes, the Marvel stage is the biggest there is. Fans recently saw a new Captain America hit their screens in the record-breaking The Falcon and the Winter Soldier — which soared to the top of Nielsen’s original streaming rankings for its first two episodes.

The series also introduced new characters like John Walker (Wyatt Russell) — who had a dose of the memorable super soldier serum — and Isaiah Bradley (Carl Lumbly). The latter would anchor the show in its discussion around Captain America and Blackness with Spellman using the Avenger television show to address the social and political issues with Mackie’s Sam taking up Captain America’s shield and his heroic mantle.

Spellman assembled a nearly all-Black writer’s room for The Falcon and the Winter Soldier to tell Sam’s journey as authentically as possible, and the new comic series is continuing to celebrate that Captain America can be anyone.

On The United States of Captain America, Marvel shared:

Created by a diverse lineup of all-star talent, these new Marvel heroes come from all walks of life and will have their thrilling origins, heartfelt motivations, and bright futures explored by their creators in special backup tales each issue.

The inclusion of not only a diverse set of characters, but also a diverse roster of creative talent, is further cementing Marvel’s — and by association The Walt Disney Company’s – commitment to creating diverse content using the knowledge, expertise, and passion of diverse writers, artists and actors. In March, we saw the addition of the deaf, Native American actress Alaqua Cox to the Hawkeye Disney+ series, where she will take on the role of Echo — a deaf and Native American hero in the comics.

What is The United States of Captain America?

Written by Christopher Cantwell with art by Dale Eaglesham, this limited series will be an epic adventure worthy of the iconic hero’s milestone anniversary. Not only will the series see the ultimate Captain America team-up—bringing together Steve Rogers, Sam Wilson, Bucky Barnes, and John Walker—but along the way it will introduce new shield-bearers that have been inspired by the star-spangled Avenger.

Are you excited to see another new Captain America?