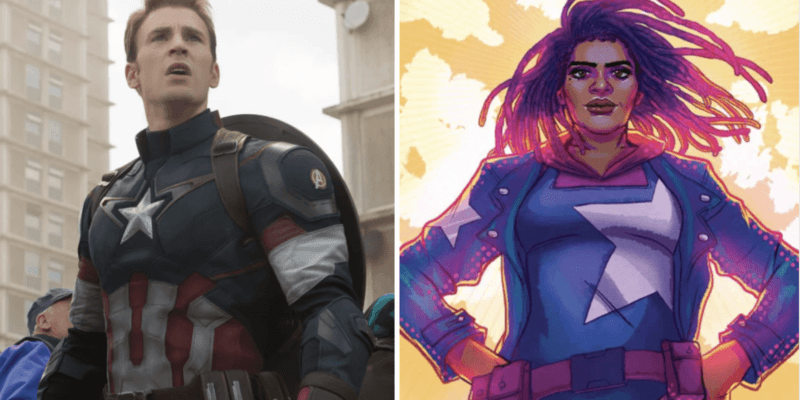 It’s the Year of the Shield at Marvel. Marvel Comics is celebrating eighty years of Captain America, the beloved Star Spangled Man with a Plan. Ever since his first appearance back in 1941 – punching Hitler in the face and taking on Nazis – Steve Rogers has been a crucial member of the Avengers and a fixture of Marvel Comics.

To commemorate the historic milestone, Marvel announced a new limited series called The United States of Captain America. Written by Christopher Cantwell and art by Dale Eaglesham, the story revolves around Steve Rogers and Sam Wilson (and even John Walker) hitting the road to recover Captain America’s shield. The shield has been stolen by a mysterious masked bad guy.

Nichelle Wright, created by author Mohale Mashigo and artist Natacha Bustos, hails from Harrisburg, Pennsylvania. Steve and Sam will encounter the new superhero after she is framed for stealing Cap’s shield.

In an interview with CBR, Mashigo had this to say about her new character:

The thing I can say about Nichelle is that she is working day and night to bring change into a world where she feels defeated. Nichelle is a light in a dark time and she wants to take ownership of her community and space in America.

The character clearly means a lot to the team behind her. Nichelle signifies that Marvel is still looking to the future for a character like Captain America, even if she is not the first black female character to pick up the shield in the Marvel universe.

Samantha Wilson (a female version of Sam Wilson from an alternate timeline) holds that honor. Unlike Samantha, Nichelle’s story will take place in the main Marvel comic line and will have plenty of opportunities to return as one of Earth’s mightiest heroes.

Not a future Cap, not an alternate universe, there is now a current 616 black woman as Captain America.

Not a future Cap, not an alternate universe, there is now a current 616 black woman as Captain America. https://t.co/qoTXxUs0js

The sentiment is shared by fans that it is about time for a character like Nichelle.

Let us know in the comments below if you will be picking up The United States of Captain America #2 when it goes on sale this July.