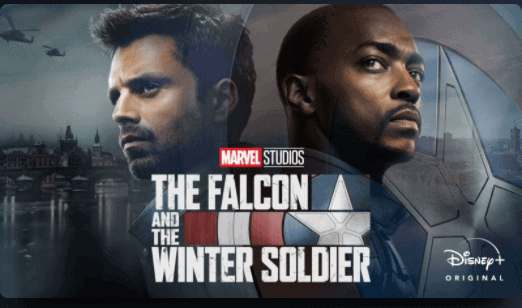 Warning: If you are not caught up on The Falcon and the Winter Soldier stop reading — SPOILERS ahead.

The world has tuned in to The Falcon and the Winter Soldier for the last six weeks, watching as a new superhero duo deals with the repercussions of a post-Blip universe without Steve Rogers. The hit Disney+ show — which has outperformed its original streaming predecessors WandaVision and The Mandalorian — found a loyal fan base, namely due to its stars, Anthony Mackie, who plays Sam Wilson / Falcon, and Sebastian Stan, who brings his Bucky Barnes / Winter Soldier character back to the Marvel Cinematic Universe.

This week saw the final episode of The Falcon and the Winter Soldier, and fans across the world watched with bated breath as the conclusion of the miniseries brought everything to a head. Viewers reeled after the sudden appearance of a certain comic book villain made her MCU debut, Contessa Valentina Allegra de Fontaine played by Julia-Louis Dreyfus, last week.

The new addition to an already stellar cast offered Wyatt Russell’s Captain America, or John Walker to his friends, a highly secretive proposition. The team-up came after Walker’s tragic display of power, which led to Steve Rogers’ Captain America’s shield being desecrated in public.

There have been many theories over which direction The Falcon and the Winter Soldier could go. Creator Malcolm Spellman and director Kari Skogland have used the rousing adventure thriller to tell an intricate story of race relations in the United States of America, as well as offering a commentary on the displacement crisis following Thanos’ (Josh Brolin) snap at the end of Avengers: Infinity War (2018).

While Avengers: Endgame (2019) didn’t offer much of a look at what happened after Tony Stark / Iron Man (Robert Downey Jr.) saved the world and brought everyone back, the Disney+ original shows have given Marvel fans a look at the results of such a tragic event — WandaVision saw Elizabeth Olsen’s Wanda Maximoff / Scarlet Witch deal with the heartbreaking personal loss of Vision.

Well, as the saying goes — good things come to those who wait — and Episode 6 of The Falcon and the Winter Soldier, “One World, One People”, certainly delivered on epic action sequences, spawned new theories, and finally, finally, saw the reveal of Anthony Mackie’s Captain America.

A recent TV spot leak on YouTube already showed a sneak peek of Sam Wilson soaring through the sky clad in the classic red, white and blue of the star-spangled hero. But, fans were still elated when the Falcon became the new Captain America, finally taking up the mantle that Steve Rogers (Chris Evans) passed on to him at the climax of the Infinity Saga.

While that may seem like the most exciting thing to happen in the episode, the end title card revealed something huge and possibly hinted at a possible Season 2!

We know from the recent Emmys submission that The Falcon and the Winter Soldier has been submitted for the Drama Series category, while WandaVision is being put forward for the Limited Series group. That being said, could the reveal of this new title offer a look at where this now fan-favorite Disney+ show could go?

What did the name of the show change to?

This is obviously a big deal and has fans talking so let’s take a look at what some are saying and how Captain America broke the internet following the finale of The Falcon and the Winter Soldier.

How are fans reacting?

And another fan, Isabel (buckndiaz) couldn’t deal with the emotional ending of the episode:

#FalconAndWinterSoldierFinale spoilers
–
–
–
–
–
SAM PUTTING HIS ARM AROUND BUCKY AND IT FADING OUT TO CAPTAIN AMERICA AND THE WINTER SOLDIER OH MY GOD IM NEVER GONNA RECOVER pic.twitter.com/8x05ATSls5

Damn @Marvel why you gotta make your fans tear up like this?

Damn @Marvel why you gotta make your fans tear up like this? pic.twitter.com/HGpKcFlx3e

Although, harriet (@_buckysfalcon_), realized that something was missing from the new title card.

The title card reveal at the end of the episode is sure to be a big hint for the future of the Anthony Mackie and Sebastian Stan-led show. In Episode 5 “Truth” there was a passing comment from Sam Wilson to Danny Ramirez’s Joaquin Torres, when he was told to “keep” Falcon’s broken wings.

Not only is there a new Captain America in the MCU, but the superhero show could debut an all-new Falcon, too. It would be interesting if Torres does become the flying Avenger, as it would echo the Steve Rogers, Sam Wilson and Bucky Barnes friendship dynamic that fans grew to love. It could even call upon more elements of Marvel Comics to drive its story forward, and by the looks of John Walker’s appearance as the US Agent, it may be already on its way of doing just that.

Captain America first came to prominence in the comic book series created by Jack Kirby and Joe Simon, who introduced the hero as a patriotic supersoldier in 1941.

Whatever happens, the MCU is headed into brand-new territory as it continues to move forward in Phase 4. Next up, we will see Tom Hiddleston reprise his iconic anti-hero role of mischief God Loki in his self-titled series, before the world will finally get Scarlett Johansson’s solo Black Widow (2021) movie in July.

Are you loving the new title, Captain America and the Winter Soldier?