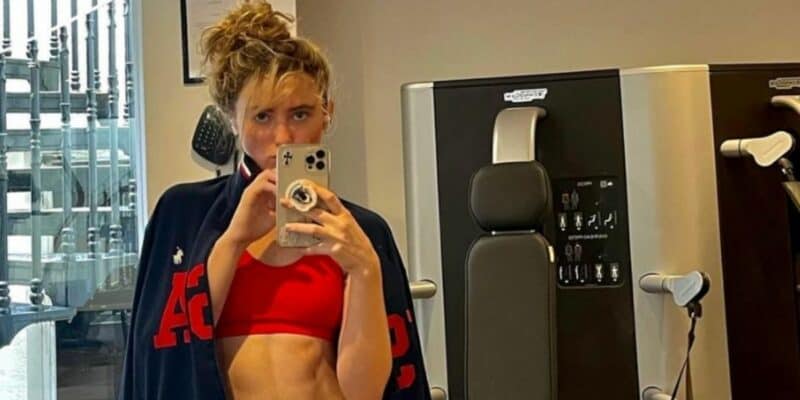 Actress Kathryn Newton has been working on her Marvel movie look since taking over the role of Scott Lang’s daughter from Emma Fuhrman for the upcoming Ant-Man and the Wasp: Quantumania, slated for a 2023 release date. The high-profile recasting of the Cassie Lang role signals that Marvel Studios has big plans for Newton and her character in Ant-Man 3 and possibly beyond. Now the actress is sharing behind-the-scenes photos from her training sessions as she prepares for her Marvel Cinematic Universe debut.

Stars sharing their body transformation photos for superhero roles is something of a rite of passage in the Marvel Cinematic Universe. Chris Hemsworth recently showed off his bulked-up biceps as he filmed Thor: Love and Thunder (2022). Brie Larson regularly shares videos of her strength training routines as she preps to reprise her Captain Marvel role in The Marvels (2022). Chris Pratt famously broke the internet years ago when he shared his transformation from schlubby man-child Andy Dwyer on NBC’s Parks and Recreation to the totally toned Star-Lord for Marvel’s Guardians of the Galaxy (2014), offering that his secret was, “Six months, no beer.” Pratt’s Guardians co-star Dave Bautista has even publicly stated that the pressure to stay in top form for his shirtless scenes is part of the reason he plans to give up being Drax for Marvel Studios beyond Guardians of the Galaxy Vol. 3 (2023).

Now it’s Kathryn Netwon’s turn to flex her Marvel movie muscles. The actress took to Instagram to give Marvel fans an idea of how hard she’s been working in the gym in preparation for the already underway filming of Ant-Man and the Wasp: Quantumania, due out in early 2023. The actress explained her dedication may have interfered with her social media presence, sharing a caption to accompany her gym photos, “Honestly why I haven’t been posting.” You can check out her post here:

Kathryn Newton’s casting was something of a surprise following the role of Cassie Lang being portrayed by Emma Fuhrmann in a brief appearance in Avengers: Endgame (2018). In that film, Scott Lang (Paul Rudd) had been stuck in the Quantum Realm for 5 years with no one to rescue him thanks to Thanos’s Infinity Gauntlet Snap in Avengers: Infinity War (2018). When he returned, young Cassie Lang (Abby Ryder Fortson) had grown into a teenager, while Lang — much like Paul Rudd in real life  — hadn’t aged at all. Abby Ryder Fortson played Cassie Lang in Marvel Cinematic Universe movies, Ant-Man (2015) and Ant-Man and the Wasp (2018).

Related: How ‘Loki’ Finale Gave Marvel Its Next ‘Endgame’ with Villain Kang

Kathryn Newton getting into superhero shape for Ant-Man and the Wasp: Quantumania has fans wondering if that could mean an expanded action-packed role for the new Marvel actress. At Disney’s Investor Dat back in December 2020, Marvel boss Kevin Feige announced that Marvel Studios had recast the role of Cassie Lang, bringing Newton into the fold. Feige also confirmed that Jonathan Majors would also join the Ant-Man 3 cast as villain Kang the Conqueror in that same presentation. At the time, Kathryn Newton shared her excitement on Instagram, posting the video of the Quantumania announcement by Feige with the accompanying caption, “Last night I dreamed of being a superhero. #marvel”

Ant-Man and the Wasp: Quantumania is due in theaters in early 2023 as part of Marvel’s Phase 4 slate. The film is directed by Peyton Reed and stars Paul Rudd as Ant-Man / Scott Lang, Evangeline Lilly as the Wasp / Hope van Dyne, Michael Douglas as Hank Pym, Michelle Pfeiffer as Janet van Dyne, and Jonathan Majors as villain Kang the Conqueror. While Marvel fans will not see Ant-Man 3 in theaters for a few years, Marvel Studios has 3 films on deck for the remainder of 2021 — Shang-Chi and the Legend of the Ten Rings (September 3), Eternals (November 5), and Spider-Man: No Way Home (December 17).

How big a role will Kathryn Newton’s Cassie Lang play in Ant-Man 3? Share your thoughts in the comments!