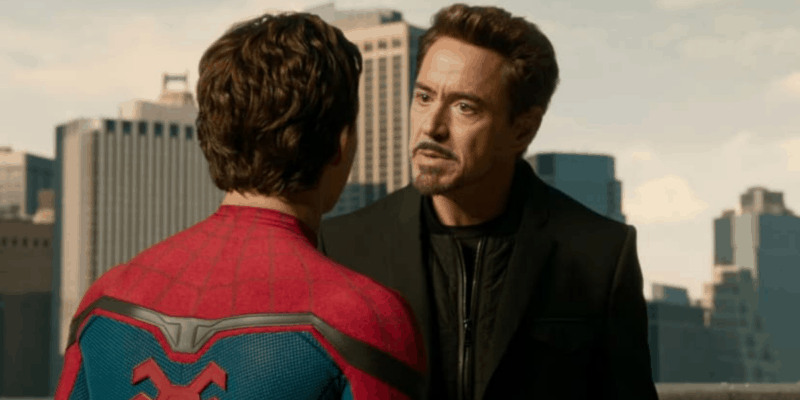 As Peter Parker and Doctor Strange team up to restore order in the Multiverse — along with Spider-Man’s secret identity — the film’s storyline appears to mirror another from Spidey’s past that was heavily influenced by his relationship with Tony Stark.

Perhaps the most eagerly anticipated teaser for a Marvel Cinematic Universe movie to date, the Spider-Man: No Way Home trailer finally dropped and gave fans plenty to unpack. The official trailer hit the internet just hours after a leaked trailer made the rounds on the web.

The No Way Home trailer revealed some plot details for the hotly anticipated MCU Spidey threequel, and teased “the worst kept secret” in the Multiverse — the inclusion of Sony Spider-Man villains Doctor Octopus (Alfred Molina) and Green Goblin (Willem Dafoe). While the rumored appearances of past Sony Spider-Man actors Tobey Maguire and Andrew Garfield were not referenced, Marvel fans say they’ve spotted Easter eggs for several other Sony Spider-Man and Marvel characters.

The upcoming Spidey film picks up the action following the events of Spider-Man: Far From Home (2019). Peter Parker is living life under a microscope thanks to being outed as a superhero by Mysterio (Jake Gyllenhaal).

In the new trailer for No Way Home, we find Peter Parker enlisting the help of Doctor Strange to magically remix the timeline and give him back his anonymity at the cost of his personal life. Despite a stern warning from Wong (Benedict Wong), Doctor Strange attempts the tricky spell to make the world forget that Peter Parker is Spider-Man. In doing so, Spider-Man and Stephen Strange inadvertently invite the Multiverse to crash the main timeline of the Marvel Cinematic Universe. Reality-bending chaos ensues.

Many of the plot elements revealed in the trailer resemble certain story beats from specific arcs in Marvel Comics — namely the climax of Marvel’s Comic Universe-wide epic Civil War, the Amazing Spider-Man crossover follow-up event One More Day and One Moment in Time. In classic Marvel Studios fashion, the MCU adaptation appears to take cues from the source material — while reimagining elements that lead audiences in unexpected directions.

Mysterio may have blown Peter Parker’s cover in the Marvel Cinematic Universe, but it was actually Peter’s allegiance to Tony Stark that led to him publicly revealing his secret identity in the comics.

The storyline that was the obvious inspiration for Captain America: Civil War (2016) began with Peter Parker and Tony Stark entering into a mentor/mentee relationship — with Stark inviting Parker, his spouse Mary Jane Watson, and Aunt May to live in Avengers Tower. Iron Man also supplies Spider-Man with some world-class Stark tech — in the form of the tricked-out “Iron Spider” weaponized suit.

Spider-Man took sides with his mentor Iron Man — against Captain America and others — as an advocate of the Superhuman Registration Act. In order to show his staunch support for Iron Man and the Superhuman Registration Act, Spider-Man publicly unmasked at a press conference. As the story progressed, legendary Marvel villain the Kingpin attempted to take out Peter Parker; however, the botched assassination wound up killing Peter’s beloved Aunt May instead.

Marvel’s One More Day and One Moment in Time

One of the most divisive storylines in the history of Spider-Man comics, Marvel’s 2009 arc One More Day from J. Michael Straczynski and Joe Quesada has been held up by critics as a perfect example of the worst kind of deus ex machina. In the story, Peter Parker is desperate to bring Aunt May back from the dead, and makes a deal with the demon — and imagined WandaVision big bad — Mephisto. Mephisto agrees to make the world forget that Peter Parker is Spider-Man, but in exchange Parker must agree to give up his marriage to Mary Jane.

Once Mary Jane and Peter Parker agree to the terms of Mephisto’s bargain, Mephisto rewrites history so that Peter and Mary Jane are never married, Aunt May is never killed, and the world forgets Spider-Man’s secret identity.

The convenient storyline led to a host of timeline continuity issues throughout the Marvel Comics universe. Joe Quesada, editor-in-chief of Marvel at the time, created a One More Day sequel called One Moment in Time that did its best to explain the confounding events that followed Civil War in a new timeline.

The parallels between the story in the No Way Home trailer and Peter’s desire to to magically alter the timeline to change the past and recapture his secret identity in Marvel Comics is undeniable.

Now that the Multiverse has entered the chat, the possibilities in the Marvel Cinematic Universe are endless. Using a deeply controversial Spider-Man comic storyline as inspiration for one of the most hyped Marvel films in years may seem risky, but Marvel boss Kevin Feige and team have a pretty solid track record.

Spider-Man: No Way Home is set to premiere in theaters on December 15, 2021. The film is directed by Jon Watts and stars Tom Holland as Spider-Man, Zendaya as MJ, Jacob Batalon as Ned Leeds, Marisa Tomei as Aunt May, and Benedict Cumberbatch as Doctor Strange.

You can watch the official trailer here:

What did you think of the Spider-Man: No Way Home (2021) trailer? Let us know in the comments!