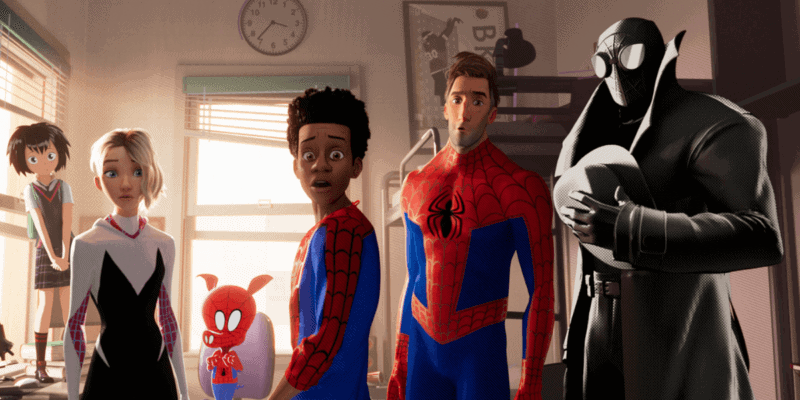 Marvel’s Spider-Man is one of the world’s most recognizable superhero characters, with numerous actors portraying the live-action versions of web-slinger Peter Parker. With the Multiverse and Spider-Verse being introduced in recent Marvel projects, endless versions of Spider-Man heroes are making their way into the Marvel Universe.

We’ve created a guide to every version of Spider-Man that you need to know.

Peter Benjamin Parker lost his parents, Richard and Mary Parker, at a young age. Orphaned as a toddler, he had to live with his Uncle Ben and Aunt May.

During a science exhibition, he was bitten by a Radioactive Spider, granting him his powers. He decided to use these powers for his own selfish gain, until his Uncle Ben died at the hands of a Burglar he could’ve stopped. It was at that point that he learned “With great power, there must also come great responsibility”, and decided to live up to his uncle’s mantra and use his powers as a force for good as Spider-Man.

This Spider-Man lives on the Sacred Timeline, Earth-616, and has seen three actors portray the character in Marvel movies: Tobey Maguire, Andrew Garfield, and most recently, Tom Holland’s Spider-Man.

The essential basis for his character is that Peter was unfortunately orphaned at a very early age and taken into his Aunt May and Uncle Ben’s home. From there on, Peter formed a father and son-like relationship with Ben Parker, his uncle. Being bitten by a radioactive spider during a science exhibition (most commonly held by OSCORP INC.), Peter gains great powers.

Losing his uncle to a fatal gunshot, this Peter Parker is first determined to avenge his uncle but later realizes that he’s been given an immense set of powers that he can use for good.

Rather than seeking revenge on the man (sometimes “men”) that killed his uncle, Peter Parker uses his powers for good as Spider-Man.

In the comics and various film and TV adaptations, Peter Parker pursues love interests in Mary Jane Watson (“MJ”) and Gwen Stacy, daughter of Captain Stacy of the NYPD. Tragically, however, Peter loses either one or both of his love lives throughout alternate storylines, most commonly with the death of Gwen Stacy.

Nonetheless, Spider-Man can channel this loss into newfound strength to take on New York’s next threat: the Sinister Six. This supergroup of villains is lead by Doctor Otto Octavious/Doctor Octopus (“Doc Ock”), but the lineup of his supporting crew tends to change. Nonetheless, ranking members of the Sinister Six include the Norman Osborn/Green Goblin, Vulture, Electro, Mysterio, and Sandman.

Miles Morales became a household name as the “new” Spider-Man in Sony’s Spider-Man: Into the Spider-Verse (2018).

According to Marvel Wiki:

Miles Morales, a young kid from Brooklyn visited his uncle Aaron Davis (which was against his parents’ wishes, due to his uncle’s criminal past) after being awarded the final spot in a charter school lottery. At his uncle’s apartment Miles was bitten by the Oz-enhanced spider, which emerged from Aaron’s bag, and Miles discovered he received superhuman abilities like camouflage, increased agility, as well as some sort of stun blast, and upon revealing his newly found powers to his best friend, Ganke Lee, both concluded he had power similar to Spider-Man’s, including wall-crawling. But Miles reacted negatively, as he just wanted to be normal, and decided to leave heroism to the actual Spider-Man.

In the Marvel Universe, we see Miles Morales’s heroic journey into becoming the Amazing Spider-Man after taking the mantle from the late Peter Parker.

In Spider-Man: Into the Spider-Verse, we see Peter die at the hands of crime lord Kingpin, but other interpretations of Peter’s death include Mysterio transporting Spidey into another dimension, the Green Goblin, the Punisher, and other fatal accidents.

At first, refusing the title of “Spider-Man,” Miles eventually realizes the importance and power placed in his hands and becomes the alternate Spider-Man of his world.

In an alternate universe, Gwendolyn Stacy is born to George and Helen Stacy. After losing her mother at a very young age, Gwen is solely raised by her father, NYPD Captain Stacy.

Due to her introverted and artistic personality, Gwen and her father were at odds with the types of ethics her father tried to instill in her. As a result, Gwen often retreated into quiet seclusion and played the drums.

Eventually, Gwen forms a close friendship with fellow introverted and bullied neighbor Peter Parker. In this universe (Earth-65), Peter is a regular Brooklyn kid without any superpowers.

According to Marvel Fandom, Gwen is “bitten by a genetically-engineered spider, Gwen was granted arachnid-like super-powers, and started a career as a crimefighter, dubbed by the media as “Spider-Woman.” She was given a costume and a set of web-shooters by retired crimefighter Janet van Dyne. Gwen spent most of her early adventures focused on exploiting and maintaining her newfound attention more than helping those in need; however, Gwen’s behavior changed after her father expressed he believed Spider-Woman could easily “help people.”

In another alternate universe, Peter Porker was born a spider but later turned into an anthropomorphic swine like May Porker, the mad scientist — whom Peter resided in the basement of — when living a peaceful life as a spider.

Running away from May Porker, Peter soon realizes that as a pig, he still obtains the powers and abilities of a spider.

After this startling series of events, Peter (who adopted the surname “Porker”, that of his benefactor May Porker, who after the accident reverted mentally to a state in which she believed she was Peter’s loving aunt) dedicated himself and his new-found abilities to fighting injustice as Spider-Ham.

Related: Marvel Sets Up to Kill Spider-Man, Bring Back Their Most Reviled Character

There are various interpretations of the Scarlet Spider and those who lie underneath the mask, but for simplicity’s sake, we’ll focus on Ben Reilly, the clone of Peter Parker created by the Jackal.

The Jackal activated a bomb during a fight between him, Peter Parker, and Peter’s clone. All of this rose from the Jackal’s love interest with Gwen Stacy, whom he blamed Spider-Man for the death of.

The Jackal was Gwen Stacy’s university professor who fell in love with Stacy but was the girlfriend of Peter Parker at the time. Miles Warren was a professor of biochemistry at Empire State University who took a keen interest in human cloning. As a result, Warren created a clone of Peter Parker from Parker’s DNA and intended to kill the Spider-Man with a version of himself.

In an explosion from a bomb caused by the Jackal, the clone of Peter is seemingly killed but later re-emerges and eventually forms a close-knit relationship with the real Peter Parker.

According to Marvel Wiki:

After an initial distrust of each other, Peter and Ben became friends and worked side by side as Spider-Man and the Scarlet Spider it was revealed by Seward Trainer that Peter was the clone and Ben had been the real Peter Parker all along. This drove Peter almost insane and left Ben stunned. They agreed to keep their names, since Ben still didn’t feel like he deserved the name. Peter soon gave up the webs when he found out that Mary Jane was pregnant, leaving Ben as New York’s only web-slinger.

While Peter Parker was on trial for a murder he didn’t commit, Ben Reilly took Peter’s spot in prison; giving Peter the mantle of Scarlet Spider, while the police figured out how to prove Peter Parker innocent. It was later revealed Kaine had committed the murder and due to being a clone, they thought it was Peter’s fingerprint on the skeleton.

Related: Is Loki Too Selfish For Love?

Peter Parker eventually moves to Portland with Mary Jane to lives a more secluded and quiet life, giving Ben the mantle of Spider-Man. At first, Reilly continued to operate as the Scarlet Spider, even refusing Peter’s original Spider-Man suit.

Venom is a symbiotic organism from another world that feeds on adrenaline, rage, and anger and grants spider-like abilities to its hosts.

Various individuals have been absorbed by this symbiotic infestation, most notably Peter Parker and anti-hero Eddie Brock.

A hulking and twisted distortion of Spider-Man, Venom is the result of an alien symbiote merged with a human holding a bitter grudge against Peter Parker. This combination has proven nearly lethal to the wall-crawler numerous times.

Despite his hatred of Spider-Man, Venom has a twisted sense of morality, avoiding harming anyone he deems to be innocent and even performing heroic deeds. However, it is never clear how long Venom’s darker impulses can be held in check. No matter how hard anyone tries to keep the symbiote down, Venom always manages to come back, like a plague.

All in all, there are countless Spider-Man variations and armors that make up the Spider-Verse, something we’ll hopefully see in Spider-Man: No Way Home (2021) on December 17, 2021!

Which Spider-Man is your favorite? Let us know in the comments below!