Marvel Boss Kevin Feige Confirms Wong Vs. Abomination in 'Shang-Chi' - Inside the Magic 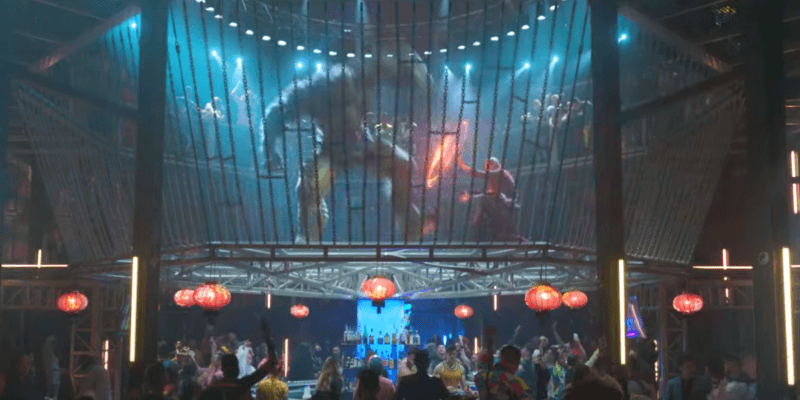 The Incredible Hulk villain Abomination (Tim Roth) was indeed throwing down in a cage match as  Shang-Chi (Simu Liu) and Katy (Awkwafina) looked on. Marvel fans couldn’t believe their eyes. Was Tim Roth’s gamma radiation-infused super-soldier Abomination back in the Marvel Cinematic Universe for the first time in more than a decade?

While the character looked a bit different — with larger fins along the spine, and new fins on the side of its head — the YouTube closed-captions revealed the monstrous brute to be the Phase One Incredible Hulk (Edward Norton) villain, as they attributed the loud roaring in the trailer’s tag to Abomination. Also, actor Tim Roth had previously stated his Emil Blonsky would be returning to the MCU for the upcoming She-Hulk series on DIsney+ starring Tatiana Maslany. So, while Abomination’s appearance in Shang-Chi was surprising, the creature’s reemergence wasn’t entirely out of left field.

Marvel fans also noted that Abomination’s opponent in what appeared to be some sort of martial arts tournament had a similar look and fighting style to Doctor Strange character, Wong. Though, actor  Benedict Wong had not yet been officially listed on the Shang-Chi cast list. Twitter user alias shared a response typical of the outpouring of Marvel fans that made “Abomination” and “Shang-Chi” simultaneous trending topics last week, saying of a video clip from the Shang-Chi trailer,

“I wasn’t expecting to see Abomination fighting WONG in the #ShangChi trailer today, BUT HERE WE ARE.”

I wasn’t expecting to see Abomination fighting WONG in the #ShangChi trailer today, BUT HERE WE ARE. pic.twitter.com/uzCc8yDrDg

While Wong’s inclusion was suspected nothing had been confirmed by Marvel Studios until Marvel boss Kevin Feige confirmed fan suspicions in an exclusive interview with Rotten Tomatoes. Feige was happy to reveal that fans had correctly picked up on the past Marvel Cinematic Universe references in the Shang-Chi trailer, commenting,

Fans wondering how Wong would be able to go toe-to-toe with a Gamma-powered monster that took Hulk the distance can look to Wong’s second appearance in the MCU, Avengers: Infinity War (2018). Prior to succumbing to Thanos and his Infinity Gauntlet snap, Wong’s magic proved quite effective at helping to keep Thanos’ street team neutralized as he faced off against Ebony Maw and Cull Obsidian alongside Doctor Strange (Benedict Cumberbatch), Iron Man (Robert Downey Jr.) and Bruce Banner (Mark Ruffalo) as Hulk was sidelined with performance anxiety. Wong returned to continuity in Avengers: Endgame (2019).

Kevin Feige loves being able to trot out different players from across the Marvel Cinematic Universe timeline to the delight of Marvel fans. The Marvel Studios president detailed how it felt to surprise fans with Abomination fighting Wong in the Shang-Chi trailer:

“[It’s] a fun thing to have a character that we haven’t had on screen in over a decade show up again in the MCU. And to see fans on that little tag of the trailer recognize that and embrace that is great fun.”

You can watch the full trailer for Shang-Chi and the Legend of the Ten Rings (2021) here:

Shang-Chi and the Legend of the Ten Rings is set to premiere in theaters on September 3, 2021, marking the first-ever Marvel Cinematic Universe film with an Asian lead, and the first September premiere for the MCU. Simu Liu will take on the titular role of Shang-Chi and will be joined by fellow castmates Awkwafina and Tony Chiu-Wai-Leung.

Are you looking forward to Abomination vs. Wong in Shang-Chi and the Legend of the Ten Rings? Let us know in the comments!

Comments Off on Marvel Boss Kevin Feige Confirms Wong Vs. Abomination in ‘Shang-Chi’