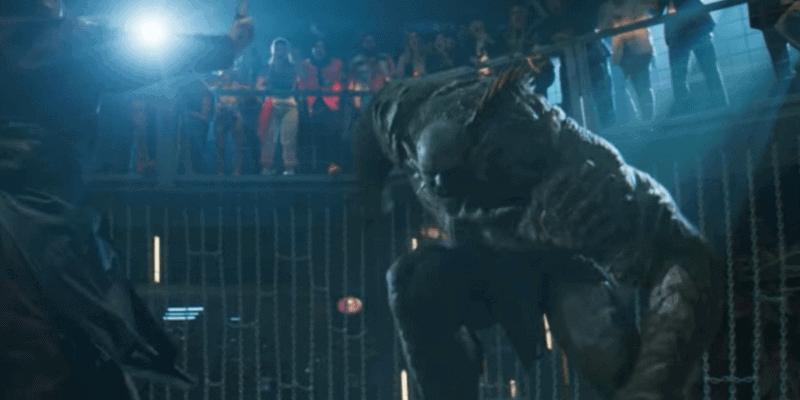 Nobody expected the internet to erupt the way it has following the shocking comeback cameo of a Marvel Cinematic Universe villain. Fans are going crazy on social media reacting to the latest Shang-Chi and the Legend of the Ten Rings (2021) trailer and the appearance of Hulk villain, the Abomination.

Ahead of an NBA Conference Finals matchup, Marvel Studios announced that a new trailer world premiere during NBA Countdown on ESPN. While the footage from Shang-Chi has so far been intriguing, the relatively obscure character has yet to light the world — or the internet — on fire. Until now.

The new Shang-Chi trailer ended with a wild scene featuring a sorcerer battling a Marvel Cinematic Universe villain not seen since way back in Marvel’s Phase One — in 2008’s The Incredible Hulk. That’s right. Emil Blonsky AKA The Abomination (Tim Roth) ened the trailer fighting some kind of wizard. In a cage. Above a bar. In front of cheering fans.

The insane cagematch caught many Marvel fans off-guard prompting hilarious reactions on social media, as Shang-Chi, The Abomination, and legendary Marvel Comics evil dragon Fin Fang Foom were all trending on Twitter at once. Twitter user Aniq took to Twitter to declare in all caps, with the Abomination clip running on a loop,

“THE ABOMINATION IS BACK IN SHANG-CHI GIVE ME A MOMENT”

THE ABOMINATION IS BACK IN SHANG-CHI GIVE ME A MOMENTpic.twitter.com/qS6Po9hm0J

Cris Parker Tweeted that he was a little unsure about who the monster in the WWE-style cagematch was, sharing a side-by-side comparison of the behemoth in the Shang-Chi trailer and Roth’s Abomination in 2008’s Incredible Hulk, saying,

It’s probably someone else but bro that looks like ABOMINATION in the #ShangChi Trailer??? pic.twitter.com/lgqBXi0vqC

While it’s true that the monstrous figure teased in the trailer looks a little differently than the Abomination of the Incredible Hulk film — this version appeared even more reptilian, with a reddish fin along its spine, and fins on the side of the face — the closed captions on YouTube dispelled any doubt as to the giant’s identity. As the monster bears down on the sorcerer utilizing magic that appears visually similar to the magic used by Doctor Strange (Benedict Cumberbatch) the captions clearly read “ABOMINATION [Roars].”

Twitter user Trafon perfectly summed up the 180 many Marvel fans made following the reveal of Abomination, with a spot-on Squidward meme, sharing,

MCU Fans when Shang Chi was announced vs MCU Fans when they saw three seconds of Abomination in the trailer: pic.twitter.com/Hatgy9ma0A

Many fans have also been assuming that the unnamed sorcerer battling abomination is Wong (Benedict Wong) from Doctor Strange (2016) and Avengers: Infinity War (2018), though this speculation is unconfirmed as of this writing. Alias Tweeted his amazement, saying,

“I wasn’t expecting to see Abomination fighting WONG in the #ShangChi trailer today, BUT HERE WE ARE.”

I wasn’t expecting to see Abomination fighting WONG in the #ShangChi trailer today, BUT HERE WE ARE. pic.twitter.com/uzCc8yDrDg

Marvel fans were excited to learn of the reemergence of the often overlooked Incredible Hulk villain, when it was announced Tim Roth would be appearing the upcoming Disney+ series She-Hulk starring Tatiana Maslany — due out sometime in 2022. But, based on these reactions, it appears Marvel fans were not prepared to witness Abomination’s thrilling return quite so soon.

The last and only Marvel film the Abomination appeared in was The Incredible Hulk starring Edward Norton as Bruce Banner / Hulk. Emil Blonsky was a sadistic special-ops agent working for General “Thunderbolt” Ross (William Hurt) in an elite unit tasked with taking down Hulk. Blonsky (Tim Roth) was given a reformulated gamma radiation infused Super-Soldier serum that enhanced his strength, durability, and reflexes to Hulkesque levels, while also ultimately transforming him into a wretched colossus known as the Abomination.

The Incredible Hulk (2008) directed by Louis Leterrier, has been largely ignored as part of the storied Marvel Cinematic Universe due to the messiness with its star Edward Norton and the film rights issue with Universal Pictures. The film famously featured a post-credits scene featuring Tony Stark (Robert Downey Jr.).

Shang-Chi and the Legend of the Ten Rings is set to premiere in theaters September 3, 2021, marking the first ever Marvel Cinematic Universe film with an Asian lead, and the first September premiere for the MCU. Simu Liu will take on the titular role of Shang-Chi and will be joined by fellow castmates Awkwafina and Tony Chiu-Wai-Leung. Watch the new trailer below:

Related: Marvel Actor Simu Liu Criticized For Being “Too Ugly” to Play Shang-Chi

Did the Abomination appearing in a cagematch in the Shang-Chi trailer totally blow your mind? Let us know in the comments!