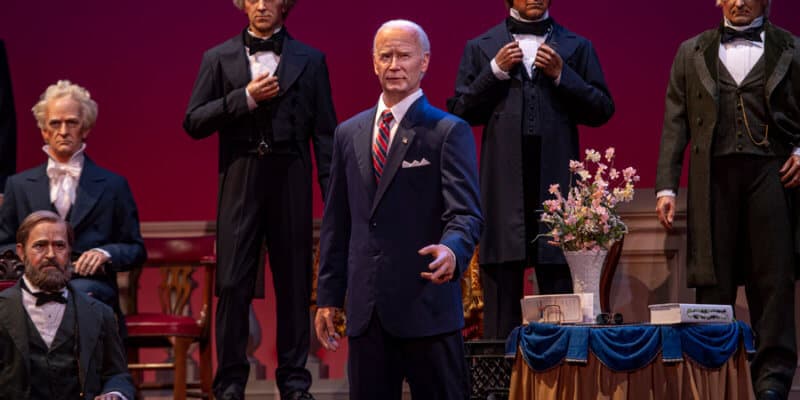 Disney World will, at times, have an attraction unavailable for a prolonged amount of time as it undergoes a refurbishment. During this time, Guests are unable to experience the attraction; however, it makes the grand reveal of all the changes that much more exciting when it returns!

Once President Biden was elected into office, Disney quickly started creating his animatronic and audio so that the Hall of Presidents could accurately depict the current Presidency. Although the attraction is set to debut tomorrow, as we mentioned, it seems that the show is experiencing a soft-opening at the moment!

Reporter Ashley Carter (@AshleyLCarter1) took to Twitter to post a video clip of the brand-new show, which shows President Joe Biden being sworn into office.

The animatronic of President Joe Biden has debut in The Hall of Presidents attraction at Magic Kingdom pic.twitter.com/X6EK0vTwaw

This speech replaces the speech of previous United States President Donald Trump, who can be seen in the top left-hand corner of the frame in the video clip.

Walt Disney World describes the Hall of Presidents as:

Know Before You Go
The show is approximately 25 minutes long and runs continuously throughout the day. Be sure to check the large clock hanging under the marquee for the next available showtime.

Do you plan on checking out the newly refurbished Hall of Presidents on your next visit to Magic Kingdom? What do you think of the new President Biden animatronic?

Want to check out the new attraction? Let us help you make it to Disney World as soon as possible by clicking here!