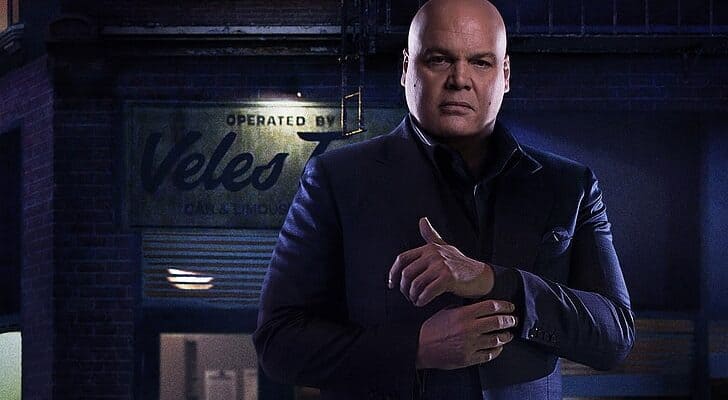 Marvel fans have been waiting with anticipation for the characters from the Marvel Netflix shows like Matt Murdock AKA Daredevil (Charlie Cox), Luke Cage (Mike Coulter), Frank Castle AKA Punisher (Jon Bernthal), and Wilson Fisk AKA Kingpin (Vincent D’Onofrio) to return in the Marvel Cinematic Universe.

Marvel canceled the fan-favorite series back in 2018, and Marvel Studios could not use the characters for at least two years. But now that time has finally elapsed, fans are ready for these characters to return. And if fan theories and rumors are to be believed, Kingpin will be the first the make the leap to the mainstream MCU in Hawkeye on Disney+ as the mysterious uncle of Maya Lopez AKA Echo (Alaqua Cox).

If you missed the Daredevil series on Netflix, this is the perfect time to catch up on one of the biggest villains in Marvel Comics before he shows up again.

Wilson Fisk grew up very poor in New York City. He had a rough childhood of being bullied for his weight and his abusive father. At twelve years old, he murdered his father and would go on to turn his massive build into an advantage instead of a drawback. He trained in many forms of physical combat, including Sumo wrestling.

However, his imposing physical stature is not the only thing that made Fisk a worthy foe of characters like Daredevil and Spider-Man AKA Peter Parker. Despite having no money for a formal education, Fisk self-taught himself as much as he could, focusing on political science, which he would use to become a criminal mastermind.

How did Kingpin become a criminal mastermind?

Kingpin first appeared in The Amazing Spider-Man #50 (1967) by Stan Lee and John Romita Sr as part of the “Spider-Man No More!” story. After Peter Parker tries to quit being Spider-Man, Kingpin uses the opportunity to rise in the criminal underworld.

For years, Wilson Fisk slowly took over and merged different gangs while accumulating wealth. He was careful never to let the Marvel heroes learn about him until he was a significant player.

With Spider-Man out of the way, he revealed his plan to form a coalition of different criminal organizations. He essentially monopolized crime.

What criminal organizations has he led?

In Marvel Comics, Kingpin’s organization has no official name. His group is often confused with the Marvel version of the mob, Maggia. After Kingpin tries to retire but ultimately returns to crime, he starts to take over the Hand, also seen in Daredevil Season Two.

The Hand is a group of evil ninjas that use magic to commit crimes worldwide. Daredevil and his mentor Stick and his love interest Elektra are all members of The Chaste, who are martial artists dedicated to taking down The Hand.

At one point in Marvel Comics, Kingpin was a member of Hydra. However, he left the organization led by Red Skull because of its unrealistic goals.

Why is Kingpin one of the greatest Marvel villains?

Kingpin is far from a typical gangster. What sets him apart is the calm, almost understated way he controls his criminal enterprises. As his name implies, he always finds himself at the top. Wilson Fisk takes his time making his political moves but what makes him genuinely terrifying is when he takes matters into his own violent hands.

At the same time, he has deep compassion for his family, his wife Vanessa, and his son Richard. However, this always translates to his adopted daughter Maya, who he trained to be an assassin.

Wilson Fisk may not have taken the super-soldier serum-like Captain America AKA Steve Rogers or been exposed to a vague form of radiation, but his physical strength is terrifying. His large body, which weighs 450 pounds, is almost pure muscle. As an Olympic weightlifter, he has been said to lift 650 pounds.

What are Kingpin’s powers in Marvel Comics?

Wilson Fisk does not have superpowers, but he is a master martial artist and has gone toe-to-toe against super soldiers and enhanced fighters like Spider-Man in Marvel Comics. Fisk has excellent willpower, but once he snaps, he has displayed insane strength levels. He has crushed people’s skulls with bare hands, tore a staircase off a wall, and ripped off a vault door.

What makes Kingpin a more significant threat than any other villain with superpowers is his criminal genius. His seemingly endless supply of henchmen is loyal to him out of fear of death. One does not simply betray Kingpin. And his mental powers have recently shown him to resist mind control by Kilgrave AKA the Purple Man.

What is Kingpin’s greatest weakness?

Marvel fans will know that Kingpin’s greatest weakness is family. Any threat to his wife Vanessa will cause Kingpin to lose all composure. His ordinarily calm and calculated demeanor is replaced by unbridled rage. It is in these blowouts that he loses control and makes mistakes.

Wilson Fisk does not have much to fear from any Marvel villains or heroes in a direct threat. However, he has made many enemies, and he does fear that they will try to get revenge on him through his family. Such as when Bullseye escaped the prison that Kingpin put him and went on a dangerous killing spree.

As the biggest crime lord in New York City, Kingpin has found himself under the sights of the many Marvel heroes and vigilantes that work in the city. He has had the most run-ins with Daredevil, Spider-Man, and Punisher.

Frank Castle has gone to war again Kingpin many times, like in the Punisher MAX series by Jason Aaron and Steve Dillon but has never made much progress against his organization. Kingpin always finds his way back on top.

Why does Kingpin hate Daredevil?

Kingpin and Daredevil have gone toe-to-toe over the soul of Hell’s Kitchen since Daredevil #170 (1964) by Frank Miller. Matt Murdock is a constant thorn in his side, thwarting many of his criminal activities.

And Kingpin is not one to take that lying down, and he has done many terrible things to get Daredevil off his back. He framed him for murder. He tried to kill his best friend, Foggy Nelson. In Born Again (1986) by Frank Miller, Kingpin even had him evicted, froze his bank accounts, and ruined his reputation as a lawyer.

Why did Spider-Man go up against Kingpin?

Fisk first appeared as a Spider-Man villain long before he took on Daredevil. When Spider-Man unmasked himself in Civil War (2006) by Mark Millar, Fisk used this new information to put out a hit on the wall-crawler. He ended up hitting Aunt May, which led to the Spider-Man: One More Day story that partially inspired Spider-Man: No Way Home.

Kingpin has been shown to give Spider-Man some respect that he never offers to Daredevil as he feels Daredevil is too sanctimonious. However, this did not stop him from torturing him and threatening his family.

How is Kingpin Related to Echo?

Maya Lopez, AKA Echo, first appeared in Daredevil #9 (1999) by David Mack and Joe Quesada. Her father was a mob enforcer, and Kingpin took her in after his death. He then trained her to become a formidable opponent for Daredevil.

After developing a romantic relationship with Matt Murdock, she learned that Daredevil was not actually a bad guy. When Echo realized that Kingpin had been lying to her, she shot him, leaving him bling for some time. She would eventually become a hero and go by the name Ronin.

Related: Florence Pugh BLASTS Marvel Fans For Getting Her Blocked on Instagram

Other Versions of Kingpin AKA Wilson Fisk in the Marvel Universe

Kingpin has a lot more name recognition amongst casual Marvel fans as he has appeared in many popular films and series outside of the 27 movies and Disney series that make up the Marvel Cinematic Universe. And fans have enjoyed every version of Marvel’s biggest crime boss they have gotten so far.

An early entry in the rise of superhero films, 20th Century Fox’s Daredevil film stared Ben Affleck as Daredevil, Jennifer Garner as Elektra, Colin Farrell as Bullseye, and Michael Clarke Duncan Kingpin. While the film does not live up to the standards of more recent films, it did well enough to get a spinoff sequel Elektra (, 2005).

While most fans agree that nothing could top Vincent D’Onofrio’s Kingpin, Michael Clarke Duncan’s performance is remembered fondly despite other problems with the film. Such as the playground scene between Matt and Electra.

Kingpin in Spider-Man: Into the Spider-Verse (2018)

Into the Spider-Verse is one of the best superhero films of all time. It brought Miles Morales (voiced by Shameik Moore) to a whole new audience. And it even tested the waters of the Marvel Multiverse before the MCU ever touched it. It brought different Spider-heroes from other realities together for the first time on the big screen.

And they all went up against Kingpin (voiced by Liev Schreiber). The Sony Pictures animated film explores what lengths Kingpin will go to after the loss of his family as he tried to use a nuclear supercollider to bring them back.

There is no performance as iconic as Vincent D’Onofrio’s take on Kingpin in the Netflix series Daredevil. When the Netflix shows first premiered, they were touted as part of the Marvel Cinematic Universe but never had any effect on the main storyline. This has caused some doubts about whether the shows are canon to MCU, with actors like Mahershala Ali and Alfre Woodard being used in other roles.

However, now that the Marvel Cinematic Multiverse exists, Marvel Studios can pick and choose who they want to bring in from other Marvel series fans have enjoyed. This is how they can bring back D’Onofrio’s Kingpin in Hawkeye without expecting anyone to have seen Daredevil.

Kingpin AKA Wilson Fisk’s Future in the Marvel Cinematic Universe

With a short run of only six episodes, Hawkeye will not have much time to do more than introduce Kingpin. He might be the significant threat behind Echo, Yelena, Kate’s mother Eleanor Bishop (Vera Farmiga), and Jack Duquesne (Tony Dalton). But at this point, it feels like they are setting him as a more prominent player later in Marvel’s Phase Four.

When will Marvel fans see Kingpin Next?

While Kingpin played a part in the Spider-verse story of Into the Spider-Verse, it is unlikely he will show up in the Marvel Studios production on the same idea. If all the rumors of crazy cameos are to be believed, then the film is already at capacity.

The best place for Kingpin to show up after Hawkeye would be in the planned Echo spinoff. Maya Lopez has a connection with him both in the comics and in Hawkeye if he is her mysterious uncle. In Marvel Comics, after she breaks away from Kingpin, it becomes her mission to take him down.

Who else is coming back from other Marvel series?

If Vincent D’Onofrio returns as Kingpin, then there are undoubtedly other characters coming around the corner. Kevin Feige already confirmed that Charlie Cox is the only one he sees playing Matt Murdock. Though that does not mean the Marvel Studios boss has confirmed he is in No Way Home.

It opens the door to other series finding their place in the Marvel Multiverse. While the Netflix shows never crossed over with films like Avengers: Endgame (2019), elements did appear in Freeform’s Cloak and Dagger, which had a significant event with Hulu’s Runaways. So that means everyone from Jessica Jones (Krysten Ritter) to Nico Minoru (Lyrica Okano) could find their way to bigger parts of the Marvel Universe.

Let us know in the comments your favorite Kingpin comic.

Comments Off on Who is Kingpin in the Marvel Universe?