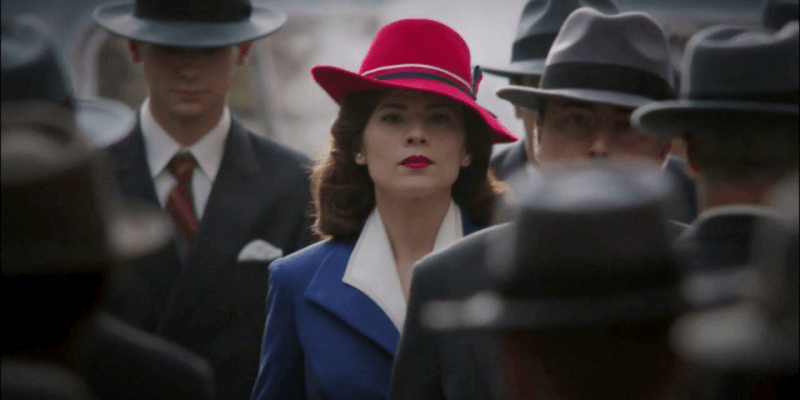 Hayley Atwell’s performance of Captain Carter, the variant of Peggy Carter who received the super-soldier serum instead of Steve Rogers, was a breakout star of Marvel Studio’s first animated series What If…?. So, it’s no surprise that Marvel fans will be seeing her again, both in the second season of What If…? and possibly in the upcoming Doctor Strange in the Multiverse of Madness (May 6, 2022).

But if that is not enough for some fans, Marvel has more planned for Captain Carter, including a brand-new comic book series hitting shelves in March 2022.

Marvel Entertainment announced via Twitter, saying simply, “Reporting for duty.” They later revealed that the new Marvel Comic will run for five issues and be written by Jamie McKelvie (Young Avengers, The Wicked + The Divine) and illustrated by Marika Cresta (Star Wars: Doctor Alpha).

The timing of her new series coincided with her imminent rumored big-screen debut in Doctor Strange 2, starring Benedict Cumberbatch as Doctor Strange, Elizabeth Olsen as Wanda Maximoff AKA Scarlett Witch, was initially scheduled to hit theaters back in March before being delayed.

Per Marvel, the series can be summed up with:

“A reality where Agent Peggy Carter took the Super-Soldier Serum instead of Steve Rogers is turned upside down when the World War II hero is pulled from the ice where she was lost in action decades before. Peggy struggles to find her footing in a modern world that’s gotten a lot more complicated – cities are louder, technology is smarter and enemies wear friendly faces. Everyone with an agenda wants Captain Carter on their side, but what does Peggy want? And will she have time to figure it out when mysterious forces are already gunning for her?”

This new series makes her the first variant introduced in What If…? to get her own solo comic book series. A superpowered version of Peggy Carter debuted in Exiles #3 (2018) by Saladin Ahmed and Javier Rodriguez. This version inspired the variant in What If…? but she was called Captain America and wore an American and not British-inspired costume.

Now it could only be a matter of time before Marvel Comics takes on some of the other characters introduced in What If…? like Star-Lord T’Challa (Chadwick Boseman), Doctor Strange Supreme (Benedict Cumberbatch), Black Panther Killmonger (Michael B. Jordan), and Party Thor (Chris Hemsworth).

The official description of the series from Marvel reads:

It amazed fans by bringing back much of the Marvel Cinematic Universe to lend their voices, but some shocking parts were recast. It was well-received enough to get a second season and spinoff of Marvel Zombies.

Let us know in the comments if you will be picking up this series from your local comic book shop.