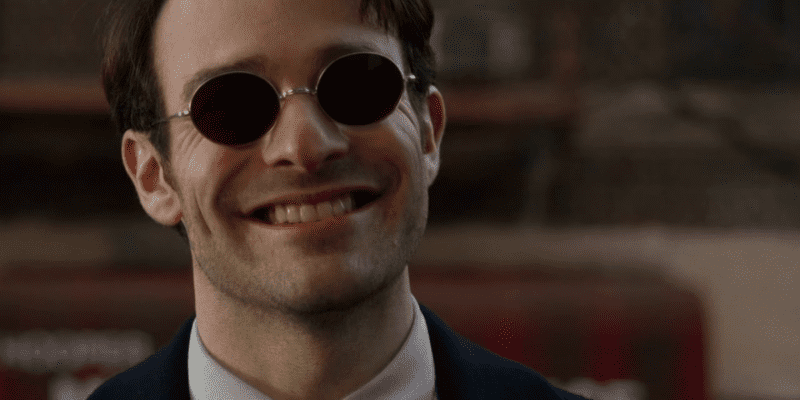 Every Marvel fan can’t wait for the Multiverse adventure Spider-Man: No Way Home. While “Spider-Men” Tobey Maguire and Andrew Garfield are speculated to star alongside Tom Holland, there’s an overwhelming amount of evidence that Hell’s Kitchen attorney Matt Murdock will save Peter Parker in the legal world.

When the official teaser trailer for Spider-Man: No Way Home (2021) debuted, the internet broke over one scene where a man slammed a stack of legal papers in front of an arrested Peter Parker.

The internet sparked rumors that the individual was none other than Matt Murdock (Charlie Cox). A new rumor comes from the debut episode of Hawkeye:

I can’t be the only one who noticed right?

In Ep.1 of Hawkeye, the hotel where the party & underground auction take place, is in season 3 of Daredevil, the home of Wilson Fisk.

I can’t be the only one who noticed right?

In Ep.1 of Hawkeye, the hotel where the party & underground auction take place, is in season 3 of Daredevil, the home of Wilson Fisk.

You can look it up IRL the address is 455 Madison Ave NY, NY 10022. pic.twitter.com/HFohNitZzQ

Using the home of Wilson Fisk from Netflix’s Daredevil for the auction location of Hawkeye is definitely not a coincidence.

An IMAX trailer revealed the character as an NYPD detective, but that didn’t stop fans from believing that Daredevil will join the Marvel Cinematic Universe in No Way Home.

Considering an assumed plotline of Peter Parker and those closest to him, like MJ Williams (Zendaya), is charged with the murder of Mysterio/Quentin Beck (Jake Gyllenhaal), Parker — who fights crime mostly in Hell’s Kitchen — needs an upright attorney from Marvel’s New York/

Marvel Studios’ Kevin Feige would not miss the chance to bring Nelson & Murdock Attorneys at Law into the equation.

Related: What Time Do ‘Spider-Man: No Way Home’ Tickets Go On Sale?

One of the best attributes of Nelson and Murdock from Daredevil, the infamous streaming series on Netflix that was unfortunately cut short, is their representation for the “little man,” those who are genuinely non-guilty of any crimes they were convicted of.

No Way Home has the perfect writing for Matt Murdock to step in as Peter Parker’s legal attorney (replacing the father figure that Robert Downey, Jr. once played a role in) and protect the Avenger while fighting crime.

There’s a rumor flying around that Charlie Cox’s Matt Murdock first appears in Aunt May’s (Marisa Tomei) apartment, with Happy Hogan (Jon Favreau) and Peter Parker sitting around a dinner table as Murdock explains the specifications of what legal trouble they’re in, but also allude to impending dangers that await Parker in the Marvel movie.

Now, let’s add in another colossal factor: Wilson Fisk/Kingpin. While Marvel Studios has not confirmed it, it’s clear that Vincent D’Onofrio will reprise his Kingpin role in Hawkeye, the brand new Disney+ series that even filmed in exact locations that Daredevil used.

Rumors have it that Kingpin will appear more comic accurately than before, with CGI making the villain appear as he did in Spider-Man: Into the Spider-Verse (2018).

Bringing in Kingpin means Daredevil can’t be far behind.

With rumors suggesting Marvel is rebooting the Daredevil series and creating a fourth season for Disney+, many suspects that Spider-Man: No Way Home is the door opening for the Marvel collection to welcome Matt Murdock into the Marvel Universe.