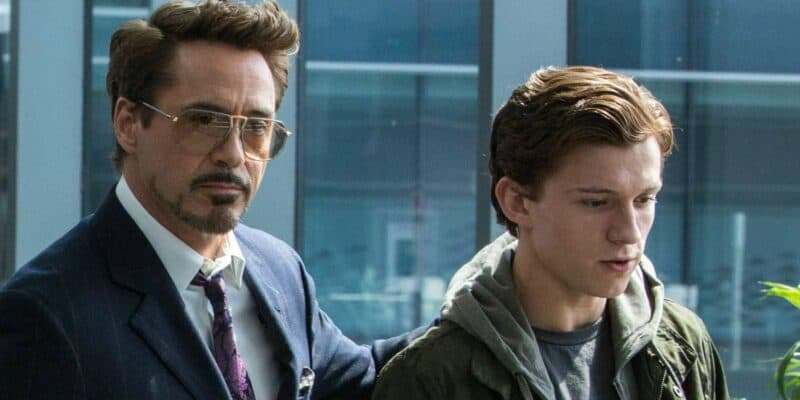 Even though the conclusion of the Marvel Cinematic Universe’s Spider-Man trilogy — Spider-Man: No Way Home (December 17, 2021) — takes place after Tony Stark/Iron Man (Robert Downey, Jr.) sacrificed himself to save the world from Thanos (Josh Brolin) in Avengers: Endgame (2019), the billionaire playboy turned philanthropist is still helping his protege, Peter Parker/Spider-Man (Tom Holland).

In the long-awaited second No Way Home trailer, which dropped yesterday — and may or may not have featured Andrew Garfield and Tobey Maguire’s debut in the Marvel Multiverse — the power of Stark Industries’ nano-tech, which Tony himself developed, was on full display.

As Doctor Otto Octavius (Alfred Molina) and Holland’s Parker fight during the bridge scene in the new sneak peek, Iron Man’s nano-tech begins to take over Doc Ock’s tentacles. Apparently coming from the Iron Spider suit, it seems that the nano-particles could actually reverse the effects of the neurolink that corrupted the villain almost 20 years ago in Spider-Man 2 (2002).

After all, there’s another shot in the trailer where it appears Octavius is helping Parker, Ned Leeds (Jacob Batalon), and MJ (Zendaya). He also doesn’t appear to be present during the subsequent fight scene featuring other villains from the “Spider-Verse”.

In Avengers: Infinity War (2018), Stark himself uses his nano-tech to suture his knife wound after Thanos stabs him, so it is not far-fetched to assume Molina’s Doctor Octopus might have tried to use the technology, only to find himself proverbially healed.

For Iron Man fans, who know that RDJ has officially closed the book on his time in Kevin Feige’s MCU, the fact that Stark’s tech is still helping Parker posthumously is a bittersweet addition to the final MCU Spider-Man trilogy installment, which Holland himself has billed as “darker” than any prior movie in the series.