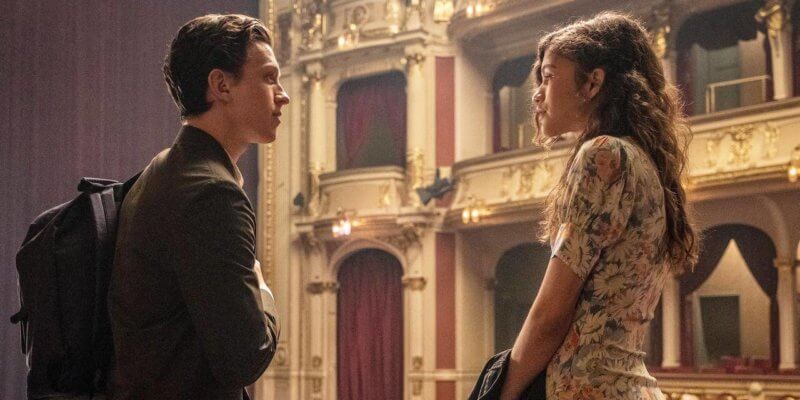 Ever since Tom Holland and Zendaya — Peter Parker/Spider-Man and MJ, respectively, in the Marvel Cinematic Universe — were confirmed to be a couple, Marvel fans have loved every second of the couple’s public interactions.

Recently, Holland has been sharing a number of posts about his girlfriend, including one from the premiere of Dune (2021), which he captioned simply:

Then, today, Holland took to Instagram to share a photo of Zendaya’s daring lipstick red bandeau bra outfit from last night’s CFDA Awards, at which The Greatest Showman actress was honored:

Naaa stop it. An incredible achievement for the most incredible person. Congrats @zendaya and @luxurylaw you guys deserve every bit of this.

One report about the actress’s outfit read:

…[Zendaya] was breathtaking in a fire-engine red Vera Wang gown, complete with a torso-revealing bandeau bra top and dramatic column skirt that gathered in a big puff around her thighs.

Strutting her stuff for the CFDA Awards, Zendaya was a vision with her hair perfectly pleated into multiple, glossy braids, simplistic makeup giving her a subtle glow, and a dazzling choker necklace adorning her throat.

Zendaya recently spoke out about how she isn’t sure if she’ll ever act with her boyfriend again following the release of the MCU’s Spider-Man trilogy conclusion, Spider-Man: No Way Home, on December 17, 2021. She told E! News:

At this time, there are rumors that Holland will return for another Spider-Man trilogy on a new contract, but this has not been confirmed by Marvel Studios President Kevin Feige or The Walt Disney Company.

Related: Columbia University Is “Hiding an Infinity Stone”, Embraces Its Most Famous “Alum”

Are you looking forward to No Way Home hitting theaters?