Columbia University Is "Hiding an Infinity Stone," Embraces Its Most Famous "Alum" - Inside the Magic 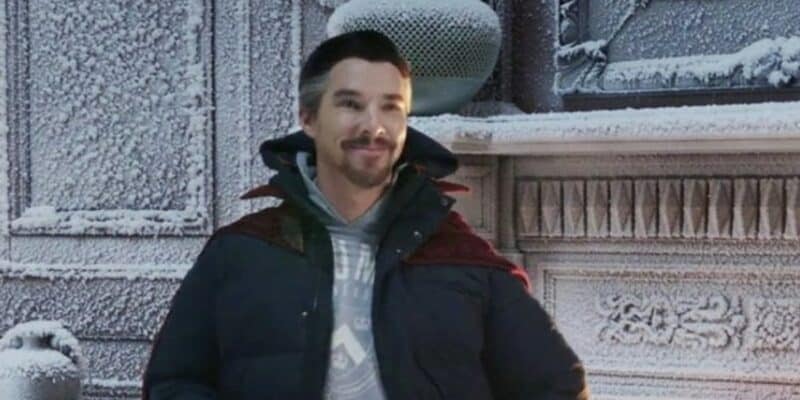 When the Spider-Man: No Way Home (2021) trailer FINALLY dropped this week, Marvel fans couldn’t get enough — the trailer quickly surpassed the Avengers: Endgame (2019) record for most views ever — and it showed Doctor Stephen Strange (Benedict Cumberbatch) as we’ve never seen him before…in sweatpants and a Columbia University hoodie.

Now, hilariously, Columbia is wholly leaning into its most famous “alumni” on social media.

A genius know-it-all Dr. and PhD. who is humbled by going on an introspective journey of the self and now helps other brilliant people save the world? Sounds like our kinda guy.

A genius know-it-all Dr. and PhD. who is humbled by going on an introspective journey of the self and now helps other brilliant people save the world? Sounds like our kinda guy. 🙃 https://t.co/RuD178EQoU

Social media users immediately started commenting on the post, and Columbia has been responding, including one hilarious exchange with Shobit that went as follows:

Columbia: Importantly he seems to have removed the hoodie before that happens…
Shobit: Well played Columbia, well played

Your kinda guys mess up multiverses???

A current Columbia student going by GuruLahoriiiiiii on Twitter wrote:

One of his followers, Drew Prettyman, replied to the post, noting that the classic grey University hoodie is now sold out:

So excited I got mine before it sold out!!!!

So excited I got mine before it sold out!!!!

First day of class and your professor shows up wearing this, wyd?

Dr. Strange popped up in the new #SpiderManNoWayHome trailer, looking cozy in his Columbia hoodie. We assure you, we have seen THAT before in a gift shop

Commentors quipped things like, “Can he cast a spell to waive my tuition?” and “Columbia is hiding an Infinity Stone, I’m calling it.”

As for Benedict Cumberbatch’s Doctor Strange, after No Way Home this December 17, MCU fans can next see him alongside Wanda Maximoff/Scarlet Witch (Elizabeth Olsen) in Doctor Strange in the Multiverse of Madness (2022).

In addition to Tom Holland’s Peter Parker/Spider-Man and Cumberbatch, No Way Home will star Zendaya reprising her role as MJ. Andrew Garfield and Tobey Maguire are also expected to return as their respective versions of Spider-Man.

To learn more about Columbia University in the City of New York, visit the educational institution’s official website.

What do you think about Columbia leaning into its most iconic MCU “alumni”?

You can stream Black Widow and the three series in the Marvel Cinematic Universe’s Phase 4 so far — Elizabeth Olsen and Paul Bettany’s WandaVision, Anthony Mackie and Sebastian Stan’s The Falcon and the Winter Soldier, and Tom Hiddleston’s Loki — on Disney+ anytime.

Comments Off on Columbia University Is “Hiding an Infinity Stone,” Embraces Its Most Famous “Alum”