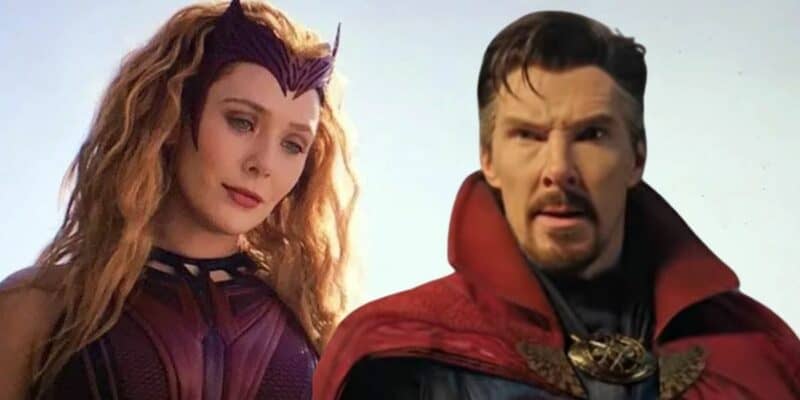 Every Marvel fan has dissected the Doctor Strange in the Multiverse of Madness (May 6, 2022) trailer that dropped during Super Bowl LVI. It was full of stunning revelations, such as confirming Sir Patrick Stewart will be returning as the leader of the X-Men, Charles Xavier/Professor X. But one line uttered by Wanda Maximoff/Scarlet Witch (Elizabeth Olsen) has caused a deep divide amongst fans.

Marvel’s Phase Four has been slowly opening the Marvel Multiverse. It began with WandaVision, continued in Loki and What If…? and it nearly broke open in Spider-Man: No Way Home. Now in the most highly anticipated Marvel movie of the year, Doctor Strange in the Multiverse of Madness, Marvel Studios will unleash the full power of their new Marvel Universe.

Everything is on the table in the Doctor Strange (2016) sequel. Is Ryan Reynolds lurking in the background as Wade Wilson/Deadpool AKA the Merc with a Mouth? Is Marvel’s Illuminati finally coming to the Marvel Cinematic Universe? Will Tom Cruise cameo as a variant of Tony Stark/Iron Man, possibly even the Superior Iron Man?

Speculation has run wild, and fans are coming together to theorize what every detail could mean for the future of Kevin Feige’s MCU. But one moment has created a clash between two groups of Marvel fans.

The line in question?

“You break the rules and become a hero. I do it and become the enemy. That doesn’t seem fair.”

For some time, it has been rumored that Wanda will become a villain in Doctor Strange 2. Fans have been debating how much she should be held responsible for her mental breakdown and subsequent brainwashing of the citizens of Westview to resurrect Vision (Paul Bettany) and live an idyllic suburban life. The loss of her two sons Billy/Wiccan (Julian Hilliard) and Tommy/Speed (Jett Klyne), is her primary motivation to travel the Multiverse with Doctor Strange (Benedict Cumberbatch). She wants her kids back, and the trailer confirms we will see them both.

What are fans saying about this line?

Some fans are not ready for Wanda to become a villain and stand by her comment about the double standard that exists between her and the former Sorcerer Supreme. They have both made mistakes; Doctor Strange is the one who weakened the walls of the Multiverse when he carelessly tried to cast the spell for Peter Parker/Spider-Man (Tom Holland). They are still debating who is responsible for the result of the botched spell.

Other fans stand on the side of the fact that Wanda was controlling people, which is worse than trying to change the memories of every person in the world, so it is not really a double standard. Some arguments stem from certain fans not wanting to admit Wanda is the most powerful avenger (she is) and that she could defeat Doctor Strange when and if it comes to that (she can).

Vaughanilla_Ice summed up why he thinks Wanda is the bad guy and not Doctor Strange:

“I really hope the movie actually shows Wanda why she’s the enemy and Strange the hero. Strange broke the rules to help Peter Parker and then things went wrong. Wanda did it out of selfishness, turned her dead husband into a puppet, and enslaved a town.”

I really hope the movie actually shows Wanda why she’s the enemy and Strange the hero.
Strange broke the rules to help Peter Parker and then things went wrong.
Wanda did it out of selfishness, turned her dead husband into a puppet, and enslaved a town. https://t.co/jPcR9o9IVN

To which a JustLikeGabo responded with a reposted TikTok video from Marvel Maven JStoobs, who points out that “Wanda’s powers have always been coded as being very feminine.” Because her powers are tied to her emotions, she is often called out of control when she uses her powers and has to be stopped. JStoobs also added, “this is why she is consistently vilified”:

this is still doing numbers so here's something for the ones that took it very personal. pic.twitter.com/Yg3r7Aw5zp

Another reveal from the Doctor Strange in the Multiverse of Madness trailer shows that Doctor Stephen Strange knew about what happened in Westview. WandaVision was set immediately after Avengers: Endgame when Wanda came back from the Blip alone. No Way Home and Doctor Strange 2 are set over a year later. In all that time, Doctor Strange did not try to stop Wanda or help her or do anything about the situation at all until he needed something from her to fix his own mistake.

Let us know if you think Wanda was right to call out the double standard to Doctor Strange.