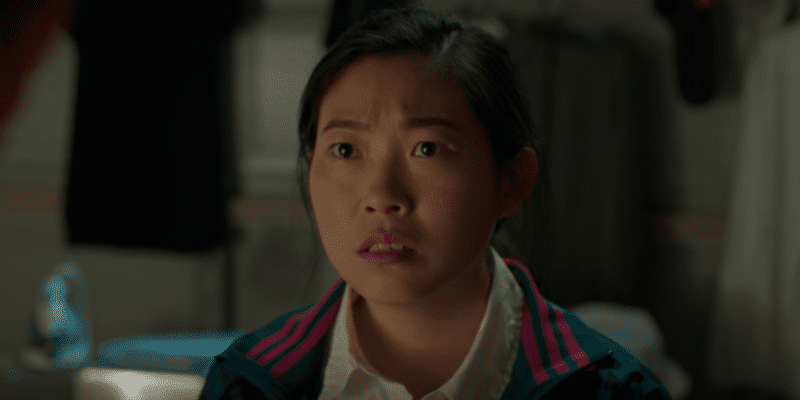 Last night, during Super Bowl LVI, The Walt Disney Company debuted a brand-new commercial for their ever-expanding Disney+ streaming service. The primetime television ad saw numerous goats dressed up as famous characters from the Disney, Marvel, and Star Wars franchises; it wasn’t the farmyard animals that drew ire from viewers though, but its host, Disney and Marvel star, Awkwafina.

And the Internet had thoughts.

Shang-Chi and the Legend of the Ten Rings gained rapturous praise from critics and fans, decimating the competition at the domestic box office when it debuted on Labor Day weekend, and subsequently shot past the holiday weekend’s previous record-holder, Rob Zombie’s Halloween (2007). The horror movie held the title for 14 years.

The movie, which predominantly featured an Asian-American cast (a first for Kevin Feige’s Marvel Studios), saw the MCU delve deeper into the history of one of the universe’s most powerful heroes, and expanded on the sinister Ten Rings terrorist organization set up in Iron Man 3 (2013). But, for all its praise, hype, and reception, fans threatened to boycott Marvel’s 25th MCU feature film due to its leading lady, Awkwafina.

Over the years, the Oceans 8 (2018) and Crazy Rich Asians (2018) actress has come under fire for imitating and perpetuating Black culture and a “Blaccent” throughout her career — that is using AAVE (African American Vernacular English) in her performances and comedy. This controversy was further ignited when a resurfaced 2017 interview revealed Awkwafina’s own thoughts on people portraying the Asian experience in film. In brief, the Golden Globe winner said:

The backlash and cancellation from fans did not leave the actress out of work, however, as in December last year, Awkwafina landed a new role in Universal’s Renfield (TBD) alongside Nicolas Cage and Nicholas Hoult. In a new turn of events, The Farewell (2019) star, released an official statement on the matter of her alleged cultural appropriation which left some fans with a sour taste in their mouths. Awkwafina then quit the social media platform, Twitter.

But, despite the backlash, threats to boycott, and arguable cancellation of one of its profitable stars, Disney’s Disney+ commercial brings Awkwafina back once again. The streaming service ad debuted during the Super Bowl game between the Cincinnati Bengals and the Los Angeles Rams, immediately garnering heat from fans with the Awkwafina-led commercial polarized audiences.

Featuring goats dressed as popular characters in a parody on the term GOAT (Greatest Of All Time), Awkwafina’s ad was deemed awkward among other things.

Awkwafina loses her Blaccent to cash that Disney check, huh?

Awkwafina loses her Blaccent to cash that Disney check, huh?

Disney fans were anxiously waiting for something other than the Awkwafina ad — the Obi-Wan Kenobi trailer, for example. As one other viewer noted:

Who greenlit this terrible ad? There were so many hopes from #disney property fans, particularly for an #obiwan teaser. Instead you put the biggest mess of a sanitized Awkwafina, who is mired in her own scandals, with literal goats for your millions of dollars? #SuperBowl

Who greenlit this terrible ad? There were so many hopes from #disney property fans, particularly for an #obiwan teaser. Instead you put the biggest mess of a sanitized Awkwafina, who is mired in her own scandals, with literal goats for your millions of dollars? #SuperBowl https://t.co/CyTfTi94gb

However, there were some who enjoyed the new celebratory ad of Disney’s premier streaming service. Brianna (@brie_ennis) said:

These are just a few of the thousands of polarising views surrounding the divisive Disney+ Super Bowl commercial. For those who haven’t seen it, check the video out below to make your own opinions. The official Disney+ account shared:

You’ve GOAT to see it to believe it. #DisneyPlusGOATS

You’ve GOAT to see it to believe it. 👀🐐 #DisneyPlusGOATs pic.twitter.com/M5Z2EL9LtU

The Super Bowl also hosted the new trailers for the next MCU blockbuster, Doctor Strange in the Multiverse of Madness (2022), and another more in-depth look at Oscar Isaac’s (Marc Spector/Steven Grant/Moon Knight), new series, Moon Knight.

Disney+ is currently delivering record numbers. With an ever-growing slate of franchise television shows like The Book of Boba Fett and the upcoming Obi-Wan Kenobi from Lucasfilm, as well as Marvel’s Phase Four series, WandaVision, Hawkeye, Loki, and more, the Disney streamer is a hit with fans.

Just last week at the most recent Disney Earnings Call for Q1, Disney CEO Bob Chapek stated that moviegoing is not the only way to build a franchise, commenting on the immense success of their 60th animated classic, Encanto (2021). And, now with the news that Netflix favorites like Daredevil and Jessica Jones are likely moving to the Disney streamer, it just goes to show how the Mouse House are bolstering their small screen service.

As for Awkwafina, the actress will next appear in Universal Pictures’ The Bad Guys (2022), Disney’s live-action remake, The Little Mermaid (2023), where she voices Scuttle, and as Rebecca Quincy in Renfield. She continues to star in Comedy Central’s Awkwafina Is Nora from Queens with BD Wong (Wally) and Lori Tan Chinn. The comedy series details the story of her character, Nora Lin, as she navigates adulthood in New York City.

What did you think of Disney using Awkwafina to promote Disney+? Let us know in the comments down below!