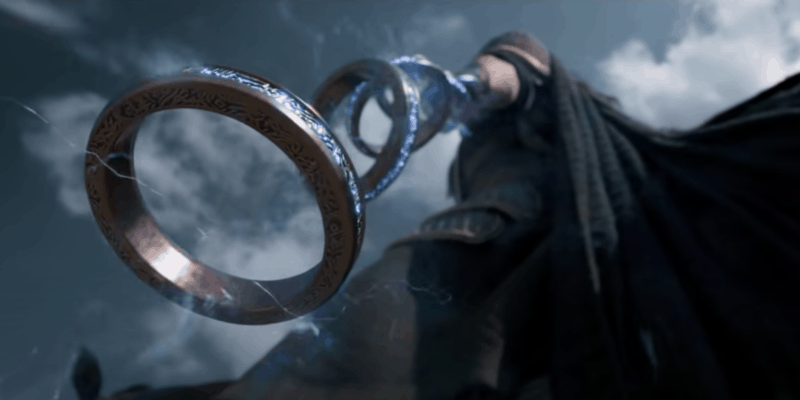 Marvel VFX supervisor Christopher Townsend was able to discuss what he could about the origins of the Ten Rings.

In a recent interview, Townsend was able to share what he could about the Ten Rings:

“Townsend remained tight-lipped when asked whether the Ten Rings are a product of the multiverse. “I mean, one of the great things about MCU is the intertwined nature of all aspects, which I think is one of the fun parts of working in these films,” Townsend said. “So I don’t want to say more, to be honest.”

Townsend continues by explaining his thoughts on how the Avenger films are great at connecting the Marvel Cinematic Universe:

“I think that we just need to let it sort of evolve. Because often it is an evolving thing, that as one story arc happens in a film, it then spurs other conversations and other story arcs and then eventually,” he explained. “I think Endgame particularly, and Infinity War were great in sort of bringing a lot of those loose ends back together. And I think that you are going to see more of that as the MCU develops.”

It is clear that Marvel has plans to unveil the true origins of the Ten Rings later most likely with the upcoming sequel for Shang Chi. It is possible that the sequel will explore the origins of the Ten Rings, yet who knows. Maybe Shang Chi will learn about its origins in a crossover film with another superhero in the Marvel Cinematic Universe. It’s hard to tell what Marvel has planned, but the one thing that we do know is that nobody is better than Kevin Feige’s Marvel Studios at telling these stories when the time is right.

In the comics, the Ten Rings are alien artifacts of Makluan origin. They were wielded by dragon like aliens and it was The Mandarin who was able to take them and then master their abilities because the Ten Rings in the comics had it where each ring had a different superpower, but the MCU has decided to deviate away from the comics at the moment. Who knows, maybe when Shang Chi reveals the true origins he will gain even more power in the MCU.

Related: Director Looks to Bring Jackie Chan to the MCU

Related: Marvel’s Shang-Chi AND Kang the Conqueror to Appear On SNL

Do you think the Ten Rings are a product of the Multiverse? Let us know what you think in the comments below!

You can stream Simu Liu’s Shang Chi and the Lengend of the Ten Rings or Scarlett Johansson’s Black Widow and the five series in Marvel’s Phase Four so far — Elizabeth Olsen and Paul Bettany’s WandaVision, Anthony Mackie and Sebastian Stan’s The Falcon and the Winter Soldier, Tom Hiddleston’s Loki, Marvel’s What If…?, and Jeremy Renner’s Hawkeye— on Disney+ anytime.