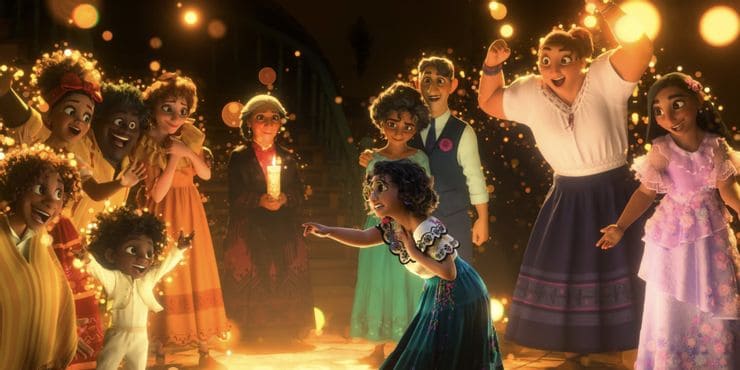 Walt Disney Company CEO Bob Chapek has hinted at the future of the mega-popular Encanto (2021) characters, indicating that the hit movie will become an entire franchise.

The Walt Disney Animation Studios film premiered in theaters on November 24, 2021. After a relatively unimpressive 30-day theatrical run, Encanto has exploded on Disney’s streaming platform. It’s Lin-Manuel Miranda soundtrack is now even officially more popular than the hit Frozen (2013) score, which featured hits like Idina Menzel’s “Let It Go” and “For the First Time In Forever.”

One Encanto song in particular — “We Don’t Talk About Bruno” — has skyrocketed up the charts. And, as it turns out, composer Miranda (Hamilton, Moana, Mary Poppins Returns) had such a hunch about the tune’s popularity that he had an “NDA for toddlers” with his sons.

As for where the franchise might go in the future, the options are nearly endless.

From a potential sequel film in the vein of Frozen II (2019) to Disney+ Original series like Moana and Princess Tiana are both getting to more toys and merchandise — which are already flying off the shelves, with the Magical Casa Madrigal Play Set sold out everywhere — to, perhaps, even a Broadway show, Encanto‘s popularity will undoubtedly continue to rise.

Miranda, in fact, recently spoke to E! News about his desire to see the popular movie come to the stage:

“I think it weirdly lends itself well. They don’t always, you know? Like, I can’t picture a Moana Broadway musical. I don’t know how you’d do the ocean. My first draft of the last song in the movie, ‘All of You,’ was like seven minutes long. It was so late in production that they were like, ‘Lin, we won’t make the movie in time. You actually have to cut this down.’ So I’ve got the Broadway finale like in the chamber.”

For now, fans can rest assured that this is just the start for the family Madrigal.

Are you excited for more Encanto in the future?