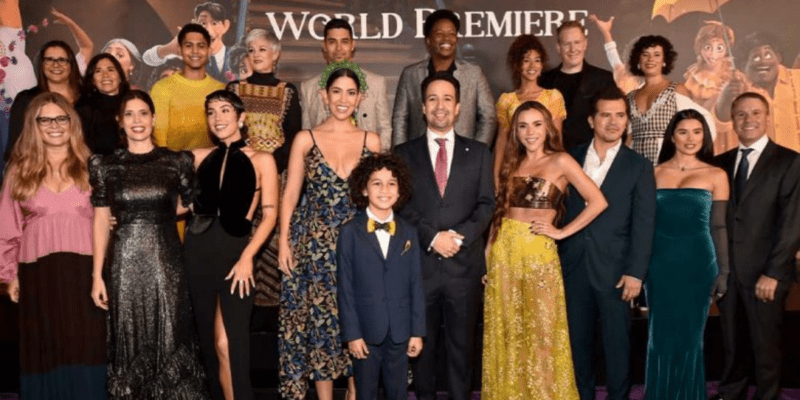 Everything you need to know about Disney’s Encanto voice cast

After a lukewarm box office performance during yet another COVID variant surge in late 2021, Disney’s latest animated feature film has enjoyed incredible worldwide popularity since its debut on Disney+. Encanto (2021) from Disney Animation Studios features marvelously catchy tunes from super songwriter Lin-Manuel Miranda of Hamilton fame that have made the film a genuine phenomenon.

The talented voice cast of Encanto brings the story and lyrics to life. To quote “The Family Madrigal” — the film’s opening number — “So many stars and everybody gets to shine.” Let’s get to know the characters and voice actors behind Disney’s Encanto!

What is the story behind Encanto?

Many fans of Disney animation are accustomed to the interpretations of classic fairytales or myths. We all know the action takes place in Colombia, but what is the story of Encanto based on?

According to producer Clark Spencer, the inspiration for Encanto was far more personal — Spencer’s grandparents. Spencer’s grandmother and grandfather were forced to flee their homes with their infant triplets — just like Alma and Pedro Madrigal. Spencer’s grandfather died, but her grandmother and the triplets survived — guided to safety by nothing more than the light of a unique candle. In the movie, the story is the same — with the added fantastical element of a magic candle that creates an enchanted house — Casita — and gives Madrigal children a unique power or gift to help their community thrive.

Related: ‘Encanto’ Song Now The Most Popular Disney Song EVER

Who is in the voice cast of Encanto?

But what about Mirabel? Encanto’s protagonist is the resourceful and optimistic Mirabel Madrigal. Stephanie Beatriz voices her. Beatriz is best known for her role as officer Rosa Diaz in the Andy Samberg cop comedy series Brooklyn Nine-Nine. She also had a significant role in the film adaptation of the Lin-Manuel Miranda musical In The Heights (2021).

Mirabel is the youngest daughter of Julieta Madrigal and Agustin Madrigal. While her mother can turn recipes into remedies for real, and her sisters Luisa and Isabela have the gifts of super strength and plant life manipulation, respectively — Mirabel doesn’t possess any magical gifts like the rest of the Madrigal bloodline. However, with her intuition and persistence, she’s the glue that keeps the family Madrigal going.

Let’s talk about Bruno Madrigal — the black sheep of the fantastical and magical family. He is played by John Leguizamo — the veteran actor and comedian is known for his varied roles in films like Romeo + Juliet (1996), Moulin Rouge! (2001), and the Ice Age animated movies. He’s also well-known for his wildly inventive, Tony Award-winning one-person shows.

Abuela Alma’s only son, Bruno’s visions of the future are his gift — and his curse. When Bruno’s prophesies get a little too real for the Madrigal family to handle, he disappears into the woodwork. Quietly lurking in the shadows with his rat pals, keeping watch over his family. When Mirabel helps the family see that Bruno’s gift is not a curse, Bruno is welcomed back to the family.

Related: Lin-Manuel Miranda Had an “NDA For Toddlers” For ‘We Don’t Talk About Bruno”

Hollywood newcomer Jessica Darrow plays Luisa Madrigal. The middle sister between Isabela and Mirabel, Luisa Madrigal, carries the world’s weight on her broad shoulders. Luisa’s super strong; the beauty and the brawn do no wrong!

Diane Guerrero plays Isabela Madrigal. Guererro is best known for her television work in the Netflix series Orange Is the New Black and HBO Max series Doom Patrol. Isabela — the eldest sister of Mirabel Madrigal — can create and control plant life with a thought. Grows a flower, the town goes wild. She’s the perfect golden child!

Diane Guerrero performs the Lin-Manuel Miranda penned song “What Else Can I Do?”

Let’s be clear, Abuela tuns this show. She is the matriarch of the Madrigal family and custodian of the family’s mag candle. Abuela takes her responsibilities to her family and the town very seriously –to the degree that she fears losing the family magic above all else.

Agustin Madrigal is voiced by Wilmer Valderrama. Mirabel’s accident-prone father is married to Julieta Madrigal — who’s capable of curing his bee sting swelling with just one arepa. Valderrama is well-known for his work on That 70s Show, Grey’s Anatomy, and NCIS — and of course, his turn as the voice of Disney Junior favorite, Handy Manny.

The voice of Julieta Madrigal is Angie Cepeda. Cepeda had a memorable role on Jane the Virgin and has appeared in films like Wild Horses (2015) and Love in the Time of Cholera  (2007). What’s Julieta’s deal? She can heal you with a meal!

Carolina Gaitán voices Mirabel’s aunt Pepa Madrigal. Fans of the Netflix series Narcos will recognize the popular Colombian actress — well-known for her television work on shows like Celia and Sin Senos Si Hay Paraiso. Pepa can manipulate and manifest weather instantly based on her mood. When she’s unhappy, the temperature gets weird.

Mauro Castillo voices Felix Mad igal. Castillo is a singer known as the frontman for the salsa group Grup Niche. Born in Colombia, Castillo is another Encanto castmember with a background in telenovelas — appearing in Paro de Mi Corazon and El Joe: The Legend. As Pepa’s devoted husband, he does his best to keep her brain from making hurricanes.

How about the rest of the next generation of the amazing Madrigals? It’s time for a grandkid roundup!

Dolores Madrigal is voiced by reggaetón singer Adassa. The “Reggaetón Princess” has worked with stars like Daddy Yankee, Pitbull, and Missy Elliot. She makes her acting debut with her turn in Encanto. She’s the daughter of Pepa and Felix, and the cousin of Mirabel. Super-hearing is her gift, and it enables her to hear a pin drop a mile away.

The youngest Madrigal — 5-year old son to Pepa and Felix — is Antonio. The character is voiced by Ravi Cabot-Conyers who has also appeared in the Netflix sitcom #BlackAF. Antonio receives his gift — the ability to communicate with animals — during the action of Encanto.

Who is your favorite Madrigal? Let us know in the comments!

Comments Off on Who’s Who in Disney’s ‘Encanto’ Cast?