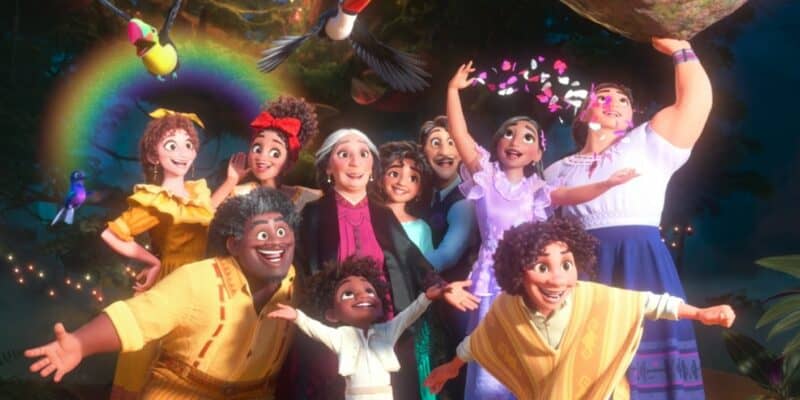 The Madrigals might not be talking about Bruno, but the rest of the world certainly is. After a quiet debut at movie theaters, the streaming release of Disney’s 60th animated classic has launched Encanto (2021) into glittery new heights. With songs going viral and trending on YouTube to the soundtrack reaching number one on the Billboard 200, to huge Rotten Tomatoes audience scores, Encanto is certainly going down in the Walt Disney Company history books.

But for those new to miracles and Madrigals, here is the complete guide to Encanto from Disney animation.

What is Disney’s Encanto?

What is the story of Encanto?

ENCANTO tells the tale of an extraordinary family, the Madrigals, who live hidden in the mountains of Colombia, in a magical house, in a vibrant town, in a wondrous, charmed place called an Encanto. The magic of the Encanto has blessed every child in the family with a unique gift from super strength to the power to heal—every child except one, Mirabel. But when she discovers that the magic surrounding the Encanto is in danger, Mirabel decides that she, the only ordinary Madrigal, might just be her exceptional family’s last hope.

Who is in the cast of Encanto?

Leading the ensemble cast of the magical Encanto is Stephanie Beatriz as Mirabel. Beatriz is perhaps best known for playing Detective Rosa Diaz in the Fox/NBC show Brooklyn Nine-Nine, and recently, the actress also starred in Lin-Manuel Miranda’s In The Heights (2021). Beatriz plays the leading character of Mirabel Madrigal with Noemi Josefina Flores as Young Mirabel.

Joining Beatriz in the fantastical Columbian adventure story is María Cecilia Botero as Abuela Alma Madrigal — the matriarch of the Madrigal family and the character who helps each Madrigal family member access and harness their gift. Olga Merediz provides the singing voice for Alma.

Encanto is truly an ensemble cast production threaded together through the central story of Mirabel’s quest to save her home.

The talent also includes John Leguizamo as Bruno whose gift is to see the future — leading to many disastrous events and his eventual estrangement from the family.

Jessica Darrow as Mirabel’s sister, Luisa Madrigal. Luisa has superhuman strength and is used to help both her family and the town complete their tasks.

Mirabel’s mother, Julieta Madrigal, is played by Angie Cepeda. Julieta has the innate gift to cure any injury with any meal. As for Mirabel’s accident-prone dad, he is played by Wilmer Valderrama.

Carolina Gaitán plays Pepa Madrigal, Mirabel’s aunt, who has the ability to change the weather. Pepa is married to Félix Madrigal, played by Mauro Castillo. Their oldest son, Camilo Madrigal, who can shape-shift rather extensively, is voiced by Rhenzy Feliz, while five-year-old Antonio Madrigal is played by Ravi Cabot-Conyers. Rounding out Pepa and Félix’s family is the oldest daughter, Dolores Madrigal, who has super-hearing.

Encanto was directed by Jared Bush and Byron Howard and co-directed by Charise Castro Smith. Smith also co-wrote the screenplay for Disney animation along with Bush. The Disney film was produced by Yvett Merino and Clark Spencer.

What are the songs in Encanto?

Like many Disney movies, Encanto is a musical. Songs are littered throughout the feature film enhancing the story, and elevating each character’s narrative. Encanto‘s song list is as follows:

“The Family Madrigal” is sung primarily by Beatriz’s Mirabel, and introduces each of the Madrigals and their respective gifts. The song is said to have been inspired by Alan Menken and Howard Ashman’s “Belle” from Beauty and the Beast (1991).

In true Disney form, a movie from the House of Mouse would not be the same without a ballad from our leading character. Mirabel’s “Waiting On A Miracle” dives into her wants and needs for the future of her family.

“Surface Pressure” is Luisa’s song discussing the anxiety and pressure of the character’s gift.

Encanto‘s big number comes in the form of the ensemble fusion track “We Don’t Talk About Bruno”. This sleeper hit has become one of the highest trending Disney songs on YouTube, peaking at Number One, with the track also hitting number four on the Billboard Hot 100, weeks after Encanto‘s theatrical debut.

Shortly after the show-stopping “We Don’t Talk About Bruno”, Isabela’s “What Else Can I Do?” showcases her desire to be free of her “perfect” label and create something completely new with her magical power.

The reminiscent and gentle “Dos Oruguitas” plays on the melodies of a traditional Columbian folk song and is performed by Sebastian Yatra. It is the emotional heart of the Disney movie and centers each character’s story in a defining moment.

Closing out Encanto is, of course, an ensemble number. “All Of You” brings together the townsfolk and the Madrigals as they face the future of their family.

Who wrote the songs for Encanto?

Multi-Award winner, Lin-Manuel Miranda of Hamilton and In The Heights fame wrote the eight original songs for Encanto.

Who composed the songs for Encanto?

Germaine Franco composed the 27 piece-strong score. Franco’s previous credits include Coco (2017) and Dora and the Lost City of Gold (2019).

Will there be an Encanto 2?

Disney is yet to announce anything in the form of an Encanto sequel. Based on its current performance on Disney+ and the virality of the soundtrack, it is possible for the Disney animation but not necessarily needed — even if “We Don’t Talk About Bruno” overtook Idina Menzel’s Frozen (2013) anthem, “Let It Go”, in chart records.

What happens at the end of Encanto?

No spoilers here but Encanto is now streaming for free on Disney+ here.

What does Encanto mean?

Translated “Encanto” means to delight, charm, or allure. According to the Collins dictionary, “Encanto” in the alluring sense means, “The allure of something or someone is the pleasing or exciting quality that they have.” The magical gifts of the family Madrigal are certainly delightful, charming, and alluring, maybe Mirabel’s over them all…

How to watch Encanto and can you stream the Disney film?

Yes! Following an underwhelming performance of $223 million at the theater box office upon its debut on November 24, 2021, due to pandemic concerns, the movie has gained a new life on Disney+ where it was released on December 24, 2021, on the streaming platform.

Have you seen Encanto yet? Let us know in the comments down below!

Comments Off on The Complete Guide to Disney’s ‘Encanto’