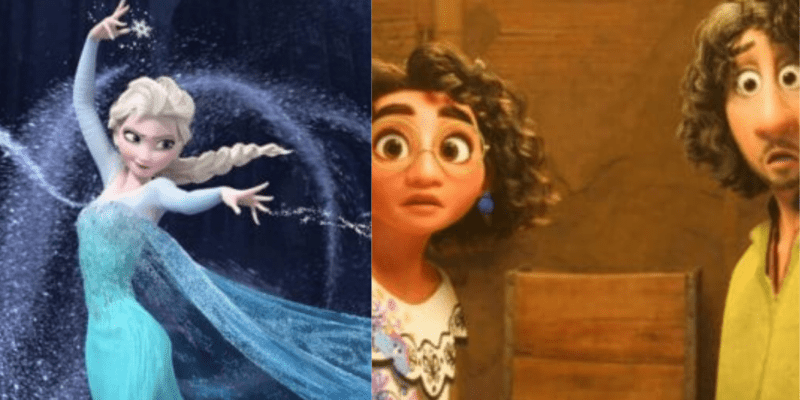 There are a lot of people who want to talk about Bruno.

Since Disney’s Encanto (2021) had its theatrical release and subsequent Disney+ debut, the movie’s popularity has skyrocketed and we are seeing more and more people singing to the catchy tune of Hamilton creator Lin Manuel Miranda’s song “We Don’t Talk About Bruno.”

According to Entertainment Weekly, the popular song has now achieved new heights that have not been reached in the World of Disney since 1995. “We Don’t Talk About Bruno” has surpassed the Oscar-winning hit “Let It Go” from the movie Frozen (2013), performed by Idina Menzel (Elsa) as the biggest Billboard Hot 100 hit from Disney’s animated filmography. This means the song has surpassed the popularity of any song on the Frozen soundtrack, which was an absolute hit.

The song — credited to Carolina Gaitán, Mauro Castillo, Adassa, Rhenzy Feliz, Diane Guerrero, Stephanie Beatriz, and the Encanto cast — reached its new peak position of No. 4 on this week’s chart with 29 million streams and 8,000 downloads sold. “Let It Go” reached No. 5 back in 2013.

The only other songs from animated Disney films to reach top-five on the charts include “A Whole New World” from the movie Aladdin (1993), Elton John’s “Can You Feel the Love Tonight from The Lion King (1994), and Vanessa Williams’ “Colors of the Wind” from Pocahontas (1995). “A Whole New World” hit No.  1 on the charts while “Can You Feel the Love Tonight” and “Colors of the Wind” both topped out at No. 4.

“We Don’t Talk About Bruno” had become very popular on TikTok and is now Oscar-nominated, which is fantastic news. We can even see characters like Mirabel Madrigal (Stephanie Beatriz) at Disneyland Resort and Disney California Adventure conducting meet and greets with Guests. The film features music by Hamilton creator Lin Manuel Miranda and the voices of Stephanie Beatriz, John Leguizamo, and Wilmer Valderrama.

With Disney+ having so much to see, you can watch the streaming platform all day! Want to see Star-Lord/Peter Quill (Chris Pratt), Iron Man (Robert Downey, Jr.), Captain America (Chris Evans), Thor (Chris Hemsworth), Doctor Strange (Benedict Cumberbatch), the Winter Soldier (Sebastian Stan), Hawkeye (Jeremy Renner), and Captain Marvel/Carol Danvers (Brie Larson) some more? What about Boba Fett? What about Loki? Spider-Man: Freshman Year will soon be coming to Disney+ (among other announcements such as  X-Men ’97, What If…? Season 2, Echo, She-Hulk, and Agatha: House of Harkness); click here to watch today!