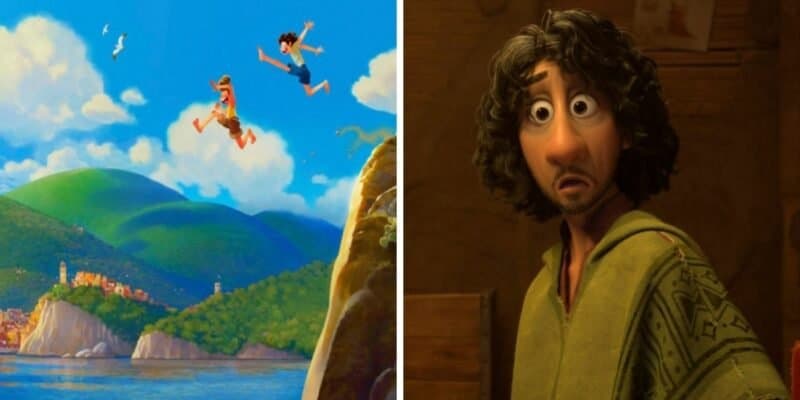 If you or anyone you know is called Bruno, then 2021 was certainly a surprising year when it comes to Disney animation.

Following Disney and Pixar’s Luca (2021), Encanto (2021) is the second Disney movie in a row using the name Bruno, along with negative connotations surrounding the character.

Interestingly, both movies involve their Bruno characters in themes relating to speech, or rather lack thereof, and thus many Disney fans are claiming Walt Disney Animation Studios has an “anti-Bruno agenda”.

Back on November 24, 2021, Walt Disney Animation Studios’ 60th feature film, Encanto (2021) was released, with critics and audiences raving about the movie’s celebration of the culture, diversity, music and people of Colombia.

The Disney animation follows the story of Mirabel, a Colombian teenager who is the only member of her family who does not have any magical powers. The film features music by Hamilton creator Lin Manuel Miranda and the voices of Stephanie Beatriz, John Leguizamo, and Wilmer Valderrama.

Many fans have compared the Pixar movie to Disney’s The Little Mermaid (1989), with the lead character dreaming to escape a life underwater to be part of another world. Like Triton, Luca’s sea monster parents — voiced by Maya Rudolph and Jim Gaffigan — are initially fearful for their son’s experience beyond the safety of their home under the sea.

In Luca, Bruno becomes a stand-in character for the internal voice that tells you you can’t do something, personifying Luca’s doubts. This internal fear propels the story of Luca forward, with Alberto confidently telling Luca: “Don’t listen to stupid Bruno.” and “Silenzio, Bruno!” during their adventures.

In the same year, Disney movie fans were treated to two Bruno characters that signify fear and estrangement. Both Bruno characters are silenced in the movies, with Alberto’s shouting of “Silenzio, Bruno” and the Madrigals’ song “We Don’t Talk About Bruno”. Many Disney movie-goers were wondering what Disney had against the name Bruno, or, in fact, someone called Bruno.

Both Bruno characters are symbols of fear and doubt, with Mirabel’s Uncle Bruno considered taboo among his family (particularly with his sister Pepa) and the townsfolk due to fears concerning his look into the future. Unbeknownst to the rest of the family, of course, Bruno never actually left the house, having been secretly living in the walls.

Luca‘s unlikely motivational message in its bold refrain of “Silenzio Bruno!” is Alberto’s method of convincing Luca to ride a homemade Vespa off of a cliff, and quickly becomes a way for Luca to feel braver in Portorosso. Director Enrico Casarosa revealed in an interview with the NZ Herald that Bruno is not based on anyone he knows:

“Bruno was just somehow preposterous-sounding in the way Alberto talks about it. So, apologies to people named Bruno! It was just very funny, and hopefully they don’t get too much of a bad rap from this. Actually, I think [Pixar boss] Pete Docter told me he had to email his brother-in-law, I think, because his name is Bruno. He had to email him to say, ‘I’m sorry, this was not me’.”

“[The line] really came from Jesse Andrews, who is our amazing writer […] The mission he was on, is how do you find a way for Alberto to really, meaningfully help this insecure kid, Luca. Because we wanted it to be Alberto-like and Alberto is full of silliness and confidence. So we thought he would have some strange way to see it. So we were really after something that was wise, but sounded strange. When our writer pitched ‘Silenzio, Bruno!’ we kind of fell in love with it, with apologies to the Brunos of the world.”

“Silenzio, Bruno!” is a huge part of Luca’s transformation from meek young sea monster into brave Portorosso adventurer, just as the misunderstood Bruno in Encanto is the catalyst for the transformation of the Madrigal family into one that treasures the person more than the gift.

Furthermore, 17-year-old Alberto voice actor Jack Dylan Grazer recently came out as bisexual and revealed he says “Silenzio, Bruno” to anyone who has an issue with it. Many Disney fans have interpreted the bond between the two boys in Luca as a coming of age story, specifically one for those in the LGBTQ+ community.

So maybe it isn’t so bad to be called Bruno?

Are you or anyone you know called Bruno? What did you think of Luca and Encanto?