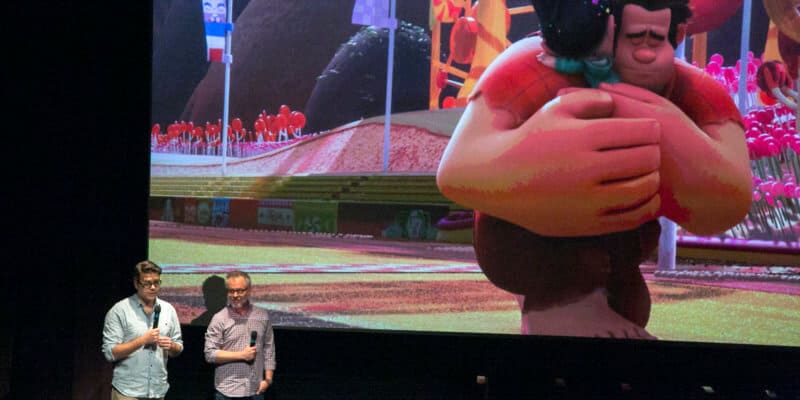 He’s still bad, and that’s still good. Ralph and Vanellope, the heroes from the hit 2012 Disney animated feature “Wreck-It Ralph,” are back this fall in the highly anticipated sequel “Ralph Breaks the Internet.”

Recently I was given the wonderful opportunity to spend a day at Walt Disney Animation Studios in Burbank, California, learning about “Ralph Breaks the Internet” from its talented production and animation teams. And during my visit, I was thrilled to sit down and chat with the movie’s directors Phil Johnston (co-writer of “Zootopia”) and Rich Moore (director of “Zootopia” and the original “Wreck-It Ralph,”) alongside producer Clark Spencer (“Zootopia,” “Lilo & Stitch,” “Bolt”).

In a way, this interview was a sequel to the one I did with Johnston and Moore over the phone back when the first “Ralph Breaks the Internet” trailer came out. Together we discussed the genesis of the follow-up, research trips to a fascinating building in L.A., toxic fandom, a familiar episode of “Futurama,” and humankind’s evolving relationship with the World Wide Web.

Mike Celestino, Inside the Magic:  People are always surprised when I tell them this, but the amount of theatrical sequels to Walt Disney Animation Studios features can be counted on one hand: “The Rescuers Down Under,” “Fantasia 2000,” “Winnie the Pooh.” What made “Wreck-It Ralph” the next logical choice to get a follow-up?

Phil Johnston:  I don’t think there was any logic to it. That’s your first mistake. [laughs]

Clark Spencer:  It’s the first sequel where the same directing / writing team had come back to do it. It really was [their] choice. The great thing about the company is that they don’t come and say, “Hey, we want this. Go figure it out.” [These] guys went away and thought about a whole bunch of different ideas, and within that started to talk about the characters [of] Ralph and Vanellope, and [whether there was] another story to tell. It really came organically from [their] own thought process.

I don’t know that everyone always necessarily wants to go back and revisit their characters, but when you find and idea that feels like there’s a “there” there, where [in this case] you have the internet and you have these two characters who [already have a story arc], then you can get excited about being able to go back and revisit those characters. [On the first movie] we spent a lot of time investing in them and creating them and building them. They’re kind of our babies, and then to not see them again is hard.

Moore:  I couldn’t imagine not doing something with these characters again. It’s really weird, as soon as the first one was finished it was like, “I want to do more with the characters, because I really love them. I love all the people that worked on it, the people who voiced the characters. We all became very good friends and kind of a family working on it together, so it was not an issue to me, the notion of visiting this world again. I was in from the beginning.

ITM:  During your presentation today, you gave a great logline for the movie: “What is the worst place you could put a person who defines himself by how other people feel about him?” Can you talk a little more about that concept and how it relates to the story “Ralph Breaks the Internet”?

Moore:  [laughs] That was not solved with the first movie.

Johnston:  When we met him at the beginning, he had been ostracized for all these years, and that doesn’t just go away. You past lives with you. And so, as Rich said, that wasn’t cured at the end of the first movie. He made a friend and he defines himself through that friend. “If that kid likes me, how bad can I be?” So we started thinking, what would Ralph say, “If that kid doesn’t like me, what am I?”

We knew that we wanted to test their friendship and their relationship, and what better place to do that than the internet? It does become a thing where they get there, and she falls in love with it, and his whole thing is he just wants to get home. He wants his life back. He wants to go to “Tapper” with her every night, and she is falling in love with elements of this other world, that, while he doesn’t hate [it] or anything, he wants home. He wants stability. She wants change.

Moore:  And he wants her to be happy. She’s not acting like she normally does, and he wants her to be a certain way. That’s kind of his sin, you know, he’s helping her, “Let’s go and fix your game,” but it’s a selfish want. He wants her to be the way she was when he met her, and he’ll go to any length to keep that friend. He does not want to go back to where he was [emotionally]. That’s his greatest fear, I think.

Johnston:  Yeah, and he’s probably closed the door on other opportunities for friendships because, “I got one, that’s all I need.” And so I think there is a lesson for, not just kids– kids can become possessive of their friends, but [for] parents resisting change. My wife always says, “I want to put a rock on my son’s head so he doesn’t grow.” But that’s not what parenting is. That’s not what friendship is. It’s about change. It necessarily is going to change, and that’s what Ralph has to learn. That’s why I think the internet is also a good backdrop, because it’s about constant change.

ITM:  The other moment in the clips we saw today was when Ralph finds the comments section. That reminded me of what we’ve seen recently with this new concept of “toxic fandom,” which is an idea that I don’t remember a lot of prior to the last year or so.

Moore:  No, it’s so new. And even when we were planning that scene, I don’t think toxic fandom had even erupted the way it has. Again, we had our finger on the pulse of something that we had no idea was going to take off the way it has, but it’s intriguing to me. It is both kind of scary and intriguing to me that people can love something so much that they will then try to destroy it if it is now how they expect it to be, and it’s a lot like how Ralph is. I would say there’s a huge component of that in Ralph. “If I can’t have it exactly the way I want it, then I will destroy it.” Inadvertently, I think.

ITM:  Rich, you worked as a supervising director on “Futurama.” The first time I heard the concept of “Ralph Breaks the Internet,” I thought of the “Futurama” episode where the Planet Express crew goes into the internet. Did anything carry over from that experience to this movie?

Moore:  Well, what I liked about that episode was, like the first “Wreck-It Ralph” movie, the idea of taking things that exist as [intangible places] and personifying them. It’s very different from how we’re treating the internet, but what I thought was cool about that episode was how it was a real place. I thought, “That is something that we can expand on.” It was such a small thing in that episode. Someone had brought it up like a year ago, and I was like, “Oh my god, I forgot all about that episode.”

I think it was one of those things I’ve had many times in my life where I’ve worked on something or seen another movie and thought, “That can be expanded. That can be taken much further.” And inadvertently, not even realizing, that’s what I’m doing. I really liked something, or something really touched me, or I thought, “That can be improved,” and it’s found its way into my feature work.

ITM:  You mentioned visiting the One Wilshire telecommunications hub building in Los Angeles, which weirdly I had never heard of before. Can you tell me a little bit more about your research trips there?

ITM:  They actually have storage?

Moore:  They just rent space. It’s like an apartment for servers, basically.

You can get even more details into the movie from the following exclusive Inside the Magic articles:

Disney’s “Ralph Breaks the Internet” will be released into theaters nationwide on Wednesday, November 21.