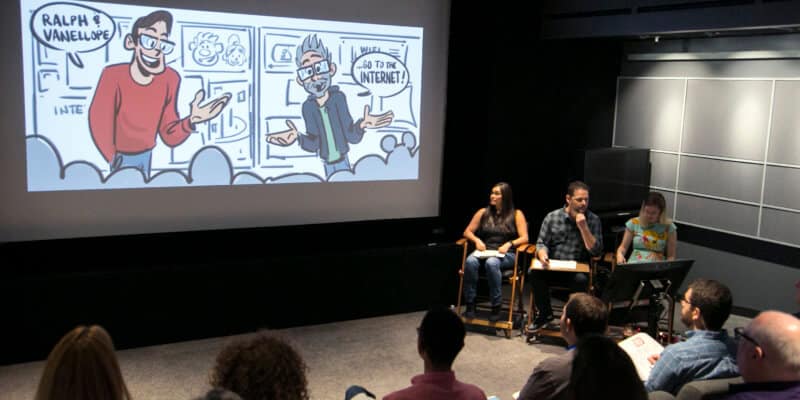 The new “Ralph Breaks the Internet” story is jam-packed with jokes and creative moments like every Disney movie. When audiences see the highly-anticipated sequel in November, many of those moments on the big screen are the result of collaborative writing, storyboarding, and editing process.

Recently, Inside the Magic reporter, Mike Celestino visited Walt Disney Animation Studios in Burbank, California, to chat with Josie Trinidad (Head of Story), Jason Hand (Story Artist), and Natalie Nourigat (Story Artist) about the many story ideas that went into “Ralph Breaks the Internet” and the gems that didn’t make the final cut.

Mike Celestino, Inside the Magic: You said something during the presentation that I hear a lot at these Disney events, and that’s 100 ideas might net you one good, usable idea. Can you tell me how that feels to spend that much time generating that much content when so much of it doesn’t see the light of day?

Jason Hand: I say that I’m oddly suited to be a storyboard artist because as soon as I finish something, I’m like, “Oh, I hate that,” and I want to re-do it. That’s just kind of my nature. I’m never satisfied with my work. As far as striving to do it better, I’m like, “I could have done that better; that could have been funnier.” So for me, it’s part of why I’m a Storyboard Artist, to be honest. I think that’s part of the fun of it for me because I think we all know when it’s the right idea, and when it clicks, everybody in the room goes, “Yes!” It’s a grind to get to that point, but it’s worth it. It feels perfect when you get it.

Natalie Nourigat: I come from comics, and back then, it was like, you’re solely responsible for whether or not this is good and if it’s working. You have to finalize everything and turn it in, and it’s just done. In the story, it’s a relief to have a team backing you up that can make it better with ten minds instead of one, and it’s not like it has to be permanent when you turn it in. There’s room to improve it if you have better ideas later.

But as Jason says, it’s so satisfying. I’m not talented enough to have been a 2D animator, or an animator, or work in layout or anything else —

Nourigat: I don’t believe that.

Trinidad: But with the story, I get this great satisfaction from not having to execute it to perfection but just come up with the idea that’s like, “Ugh, finally!” Putting puzzles together doesn’t have to be perfect, but just the idea. The foundation has to be the right thing, the structure, but not the animation has to be perfect, the hair, the look. I can’t do any of that.

Hand: Some amazing people come after us and actually plus everything. When we see our stuff start to go through animation and lighting, it’s like, “Oh my gosh, that’s a great idea!” [Laughter] I can separate myself from it a little bit.

Nourigat: I can say, “It’s a fantastic shop for bicycles and horses,” and someone else has to draw that, but wouldn’t that be a fun idea?

Inside the Magic: Are there usually certain abandoned concepts that you guys hope will end up on the DVD bonus features or shown to the media on Press Day?

Trinidad: There are so many thrown-out scenes; 110 sequences are probably thrown out.

Hand: Some of the stuff was that we don’t have rights to certain characters because we’re working in a world of other people’s media. It’s like, that would have been funny if we could have Mario [from Nintendo’s Super Mario games] in here doing this part, but it doesn’t end up working out because of that, and it’s okay, and the story doesn’t end up needing it. But as individual bits, it’s like, “That’s a great ‘Saturday Night Live’ bit!” Rich [Moore] and Phil [Johnston, the movie’s co-directors] are pretty much full of those things, so it’s an endless amount of great ideas, honestly.

Nourigat: You could probably have a three-hour DVD.

Trinidad: We talked about KnowsMore [voiced by Alan Tudyk] being a broken search engine with a virus, so every fourth answer was correct; the first three were wrong. So when Ralph went on this journey with this broken search engine to find Vanellope on the internet, that was a fun relationship.

Hand: It was hilarious.

Trinidad: So when we switched gears and story, KnowsMore went away, but he came back as the search engine with the aggressive auto-fill. So it was nice to have him come back.

Hand: Actually, in a better iteration.

Trinidad: Yes, exactly, because the other one was hard too.

Hand: It was a funny idea because Ralph has a question, but he has to ask three random other questions to get to the right one, and he’s like, “Ugh, I messed up, and I got the number wrong!” It’s all funny bits.

“Ralph Breaks the Internet” ranks as second-best Thanksgiving debut ever

Inside the Magic: Interestingly, they wouldn’t give you Mario because you had Bowser [from Super Mario Bros.] in the first movie, I thought.

Hand: Yeah, I don’t know the logistics of any of that stuff. That’s above my pay grade.

Natalie Nourigat joined Walt Disney Animation Studios in 2015 as a story apprentice, completing a year-long training program. “Ralph Breaks the Internet” is her first Disney film. Before joining the studio, she worked as a comic book creator in Portland, Oregon.

Inside the Magic: [to Nourigat] Coming into the world of storyboards, how does the world of comic books compare and contrast?

Nourigat: Many people here come from a film background, and I’ve had to catch up on that. Luckily, a lot of the skills transferred, and I came here because a lot of my friends were making the jump from comics to animation, too. It’s pretty standard. It’s been fantastic to learn these new skills from the awesome people around me.

Hand: We found that people who come from comic books, such as Natalie, it’s a great training bed for what we do. It’s like a cousin. I’ve never done it before, so I can’t say authoritatively, but it helps because you’re talking about visual storytelling; you’re making a series of images that help tell a story over time. I think there’s a reason why many people are making the jump because it’s a close skill set.

Nourigat: And everybody here could make a great comic; I’m just going to go on the record saying that.

Hand: There have been some people who have done that.

Inside the Magic: There have been published storyboards that read almost like a comic book.

Hand: Yeah, I think there’s tons of stuff that could be great by themselves, honestly. There are so many ideas, but we always have to test them against, “What’s the right idea for this movie?” That’s the goal.

Inside the Magic: Coming up with jokes and concepts as a story team, can you tell me more about what is and isn’t in the script you initially gave? You talked about Ralph going viral, and then you guys trying to pitch all these different versions, so what does it say in the script for that moment? What gap are you filling there?

Nourigat: Correct me if I’m wrong, but it seems like a script for live-action where there are action descriptions, and there’s dialogue, but then there’s a lot of room for you to stage things how you want or build in character moments.

Hand: And often, we’ll get together as a group and pitch on ideas, and then Pam [Ribon] or Phil [Johnston, the co-screenwriters] would go and write pages, being informed by maybe some of those ideas we all pitched, perhaps only taking a handful of them or even just one of them, and making something from that. It’s like a big soup of stuff being mixed around. Sometimes when I get a sequence, I’ll have an idea as I’m doing it, and I’ll just put it in there, and you can take it or leave it. You can do it by adding to a sequence you’re working on, you can do it where it’s helping inform the script, but it’s all constantly being recycled or chopped together.

Trinidad: For example, with the viral videos, we pitched on a bunch of ideas, and Phil is like, “I’m not going to waste time describing everything.” He’ll have a paragraph of “So here’s a montage, we can start with a Martin Scorsese-like shot of dragging through an office space.” In this shot, you will see various viral videos that Ralph has done, such as the Hot Pepper Challenge or the tutorial video game walkthrough. And he’s like “Artist’s Choice.”

He’ll be astute and efficient about what he puts in there, and that’s when we go, “Oh, okay, now we’re given license to go crazy here.” And then in the cutting room, they’ll look at the best ones, or the funniest ones, or what can fit in the right amount of time, and those are the ones that will stick.

Nourigat: [to Hand] So then it was up to you to take that paragraph with the rough description of what’s happening and put it into “What exactly are we seeing?”

Hand: Yeah, exactly, and sometimes there are particular things they want in there, and they’ll be in the script. When we’re issued a scene where they’re giving it to you to do this, they’ll talk about that, and then there will be times where it’s “I don’t know exactly this part, you may be just pitch on some ideas, and we’ll do it that way.” That’s why this is a good job because you can do that, you know. It sucks when you don’t have any ideas.

It’s part of the fun of it.

See the final version of the new “Ralph Breaks the Internet” story when the movie arrived in theaters on November 21, 2018.