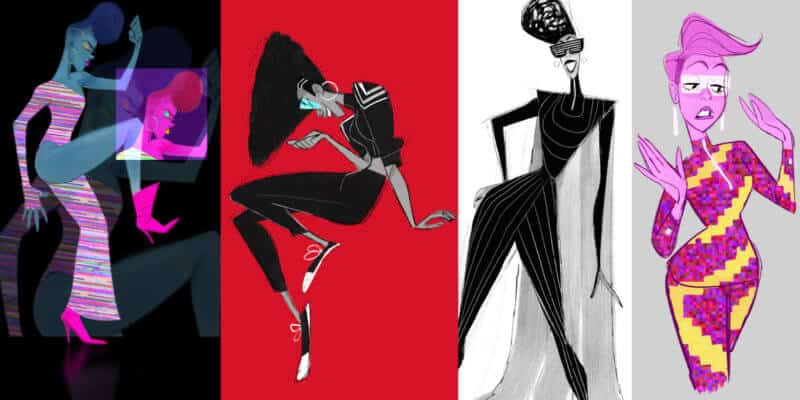 When Disney’s “Ralph Breaks the Internet” arrives in theaters next month, audiences will see internet-filled colorful characters like the Net Users, which are avatar versions of real people, and the Netizens, who are full-time citizens of the internet. In addition, we’ll meet KnowsMore (voiced by Alan Tudyk), the personification of a search engine with aggressive auto-fill, and Yesss (voiced by Taraji P. Henson), the heart of the trendy website BuzzTube.

Mike Celestino, Inside the Magic: “Wreck-It Ralph,” the original movie, wasn’t long ago — about five years. I’m interested in how much the technology has changed in those five years and how your department adjusts to the current state of technology in bringing over existing characters to the sequel.

Dave Komorowski: It sounds like making sequels is pretty easy because, hey, we’ve already got all this stuff, let’s bring it over,d we’re going to make another one. This is the first sequel that we’ve done here in CG. I think it’s the first sequel that we’ve consecutively done with the same directors, if I’m not mistaken. The act of porting it over — we’re all artists, we’re very self-critical, and I think we look at it, and we’re like, “We can do better.” So it’s bringing it over, it’s putting more love into it, just trying to find those areas of “What was it about the first film, if we had the technology at the time, we would have done this.”

It’s a sizeable amount of work, we found out. I think when we opened up those characters, we were looking at each other like, “What were we thinking?” It evolves at such a rapid pace. It wasn’t that long ago, but five years in technology is a huge amount of time. We create a lot of procedural systems that help us build these out because, in human time, there are not enough people in the studio to do all the things that we do, so we need to write new tech to keep up with the latest tech if that makes any sense.

Renato dos Anjos: I think about the first movie’s theme as well. In the first movie, these characters were still in the arcade with so many machines they could visit. Here, we’re talking about a whole world. The internet is pretty vast and substantial, so there’s no limit to where you can go and what you can do. Our directors’ appetite for this film was much bigger than the first film. I don’t think this movie that we’re making today we would have been able to make five years ago.

Moe El-Ali: In five years, the technology is entirely different. We didn’t envision what the technology would be five years ago for what we’re using in crowds right now. It’s ever-changing, and it’s cool that we’re trying to stay on the cusp. The whole studio has that driving force to keep that technology on the cusp, you know, on edge. But, what Renato was saying, I don’t think we could have made this film last year, let alone five years ago, because of the technological advances we’ve made in a previous couple of years.

Inside the Magic: I’m fascinated by the two separate categories of people, basically the extras we see populating the internet. Can you boil down, design-wise, the difference between the Netizens and the Net Users and how, from a visual perspective, you wanted to differentiate between those two types of characters?

Netizens, on the other hand, are branded to the website. They are a species completely unto their own. We wanted them to feel unique; we wanted them to feel digital, so we simplified their design. We added lots of digital elements to their hair; they have gold connections inside their hair and circuitry running underneath their skin.

The main inspiration for that came from the first movie. Surge Protector [voiced by Phil Johnston] is the closest thing in the first movie to a Netizen because he belongs in the power strip. He doesn’t belong to a game. He is somebody that keeps that world in order, and we thought that was the closest touchstone we had to what a Netizen was, so all the designs for the Netizens branched off him.

Inside the Magic: Can you go over the design and creation of KnowsMore as a character and where that inspiration came from?

Loftis: We were looking at a lot of Ward Kimball’s stylized stuff. We looked at many stylized things Marc Davis was doing there for a while [both Kimball and Davis were part of Disney’s Nine Old Men]. We dug deep into some of the old Disney animation, especially the shorts the TV specials they did. It had an enjoyable style and what was odd about it is when Disney was doing that, it trickled out into the art world, and it came full circle; the animators here were inspired by things that were going on in the art world well. There’s this unique point in time in the ’60s where that look became fine-tuned and dialed-in, and you can see it all over the place. It’s one of the few times, as opposed to the ’80s, where there’s a style all over the place, the ’60s was highly focused and very narrow, and that’s where we drew the inspiration from.

Inside the Magic: On the opposite end of that spectrum, you have the character of Yesss. As opposed to going back 50 years, she’s got a contemporary look. Can you give me an overview of the design of that character?

Loftis: We started with Taraji herself. As soon as the directors knew who they wanted to do that voice, all design-focused on that. Before there was Taraji, we were trying to get a general vibe and feel to the character, keep her fun but serious, and explore different ideas for costumes. When you took Taraji and saw what we’re doing for the Netizens, we knew that Yesss was also a Netizen, so it was an idea to blend this natural person with this very stylized Netizen design that we’d already agreed on and just meshing the two. We did lots of exciting things with her hair; we wanted her to keep some of the fun 2D stylizations; the Netizens have, so when she flips her hair from side to side, it maintains a silhouette. She has a robust, stylized profile when she moves her shoulders up and down or bends her arm or hand shapes, t, and they’re graphic. We tried to carry that through from design into animation.

Dos Anjos: One thing in the animation that is fun to play with — with the design being so stylized the way she is — we also want to play against that and make sure the character felt very believable and genuine. Her animation is very playable very fluid, but her personality is authentic. There’s a lot of power to her persona, and we want to convey that in animation. It’s an exciting thing for my team and us to get someone with a very stylized design to feel like it’s a natural person going through a lot of real situations in their world.

Inside the Magic: You mentioned something called procedural animation. Can you give me an overview of why that’s necessary and how that helps accomplish something on this kind of scale?

El-Ali: There are shots with up to 500,000 characters in them, so to hand animate each one of those is just not possible in the time we have. All we’re doing is reusing some good ideas of blending animations and moving crowds around where we can apply it to a bunch of people instead of just working on one person to make the internet come to life. It’s such a prominent place; those websites are enormous, so it was very daunting at first. It still is. We’re in the last couple of weeks of production.

Dos Anjos: As early as possible, we generate a lot of different behaviors in cycles. They’re tiny snippets of behaviors, so someone walks, someone stops, someone goes from a stop position to a walk, someone smiles, someone frowns. Procedurally, Moe’s team picks up all those pieces of hundreds of animations that we make. They put them into this system that picks and chooses those pieces and blends them to create extraordinary amounts of animation.

Komorowski: You could have a piece of animation walking straight, but the shot could be, “Hey, there’s a noise over here,” and each user has to turn their head, look at it, and walk towards that thing. That’s where Moe comes in. Each agent has a brain in it, and it has a particular set of logic like if there’s a person in front of me, I walk around it. If I hear a sound, I walk towards it.

El-Ali: We solve one solution and apply it to the masses. You keep solving all the solutions that might come up that hat necessary for a shot for each person and then use it for everyone. That said, we do a lot of handworks, cleaning everything up and polishing it to the level we need it to be for the film. We get animators on top of what we’ve done to clean up things, so it’s still animation from Disney Animation. It’s an exciting field, and since we did all this stuff five years ago, it’s changed so much in those five years as well.

Komorowski: It’s a nice blend of art and tech.

Meet the characters of Disney’s “Ralph Broke the Internet” when the film arrived in theaters on November 21, 2018.

INTERVIEW: “Ralph Breaks the Internet” story team talks about moments that didn’t make it into the Disney sequel