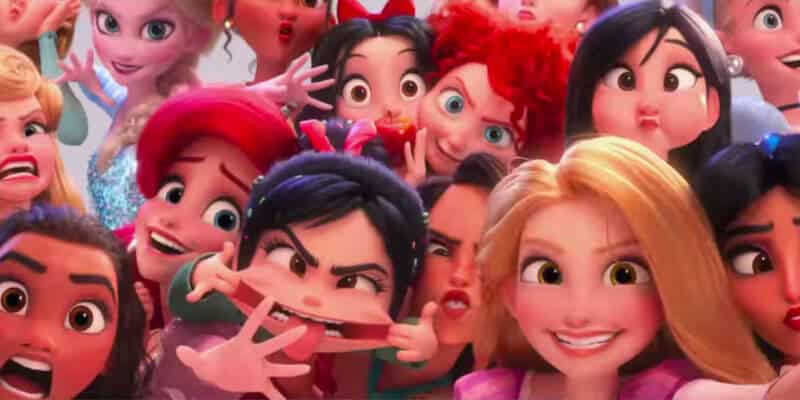 In the upcoming Disney sequel “Ralph Breaks the Internet,” Vanellope von Schweetz (Sarah Silverman) meets all the Disney Princesses at once when she glitches into a secret room on the Oh My Disney website. The Oh My Disney sequence, affectionately known as the Disney Princess scene, has been buzzed about since D23 2017 and fans can finally see it on the big screen when the movie arrives in theaters in November.

Mike Celestino, Inside the Magic: How do you feel about this content being revealed at D23 rather than as a surprise in the movie?

Kira Lehtomaki: I think for me as a Disney fan, somebody who would be at D23 regardless of whether or not I worked here, it was such a gift and an honor to not only feel like I got to be a part of this process, but also get to be there to hear the fan reaction and the warm reception. I remember going into the park after the presentation and hearing people talk about it while they were waiting in the queue for Space Mountain and it was so exciting.

Ribon: And seeing memes about this scene, it’s so weird when it will be in your feed because you still have the jolt of “This is private! We’ve been doing this for years and nobody knows about this!”

ITM: Can you tell me a little more about recording the scratch audio tracks for all the princesses and how you approached the different voices and all the research you did? And how does that transfer over to the actresses coming in and taking over?

Ribon: I am doing it to prove out our concept. So, I don’t have to worry about too much authenticity but I have to prove out what we’re doing. I would listen — you know in the recording booth we’d play it, sometimes they’d need to hear Belle or someone that I don’t necessarily have in my ear all the time — so we’d play a clip and then I’d try to match it. Some of them are a little more fun to do.

Lehtomaki: It was astounding to me, not knowing initially that you had done all the voices. I had heard that you’d done Snow White but then finding out later, I was like, “Well, surely they had 14 other people come in and do all these voices!”

Ribon: They all have their way of being and so their voice lives in a different part of their body, and so it was just knowing that. Who’s really more all face, and then who’s more in her throat? So I probably looked ridiculous doing it but that’s the point of a voiceover. Nobody can see the process, you just get the voice out. And then everybody got kind of attached to my Snow White so I’m quite honored to get to stay all the way through.

ITM: Can you talk about taking all these characters from these different sources and conforming them all to the same style for “Ralph Breaks the Internet”?

Ami Thompson: When we looked at the original princesses we realized that all the princesses are drawn really differently. Some are cartoony and some are realistic. All the designers shared some ideas, like “How do we actually make everyone be in the same world?” So we decided to come up with an Oh My Disney website version of princesses. It wasn’t a fast process. I know the designs already existed, but it was a long process of discussions about each one of the princesses.

To make sure the Oh My Disney versions stayed true to character, Mark Henn was brought in to advise the team. As a Disney supervising animator, Henn’s character work includes Ariel, Belle, Jasmine, Tiana, and Mulan.

ITM: Can you talk about working with Mark Henn and how you took his advice and brought it into the animation?

Lehtomaki: It was such an honor and a privilege to have Mark with us because he really knows so many of these characters inside and out. We would sit down with the directors and talk about, “Okay, what does this scene need to be in terms of the story?” We always talk about the obvious things about what’s happening in the scene but then we also want to dig into, “What is the character thinking? What is the subtext of the scene?”

Mark was always there and he would be the barometer of “Well, Tiana did this in this movie and so I think this would be a good opportunity for her to do that.” From the conception of these scenes coming to animation, he was giving his input. Then, as the animators, we block out our scenes, so we do a rough pass of golden poses, our storytelling poses that communicate what kind of acting we want the scene to be. He would do draw-overs just for appeal, for expressions. There are little things, like Tiana uses her eyebrows a lot in how she expresses herself, so it would be finding ways to get that in there and find moments that the movement feels like them.

In the scene, the Disney heroines get to wear comfy clothes with modern graphic shirts. Each shirt design was personalized for the character. For example, Ariel’s shirt lists all the things she collects from the human world, while Cinderella’s shirt says “G2G,” internet slang for “Got to Go.”

ITM: Another buzzworthy thing to come out of the Oh My Disney section is going to be the sweatshirts and the designs on the shirts. You showed us the image with all of them next to each other, and I feel like if that got out there, there’s going to be fan-made creations and I’m certain there’s going to be official versions available at some point.

Ribon: I’m looking forward to the Halloween costumes. You get to go as a comfy princess!

Thompson: Or maybe the conventions, too.

ITM: Can you give me some insight about how each of those shirts was arrived at? Were there alternate versions for each and how did you arrive at the final versions?

Thompson: There’s so much. What was the one you made for Rapunzel?

Ribon: Oh yeah, I wanted “Long Hair, Don’t Care” for Rapunzel. Generally, it was the one that made everybody laugh the most, that was what went. There were some that were just so charming from the beginning. I don’t even remember if there was a variation for “Finish Each Other’s Sandwiches” [Anna’s shirt]. That was just it.

Thompson: Ariel’s shirt, we thought of just writing “Shirt” but we also designed one with Flounder.

Lehtomaki: Yeah, Ariel went through a lot of options. The final one was landed on because she’s a collector, she’s got the gadgets and gizmos and dinglehoppers, so it felt appropriate for her to have a list of all of the stuff that she keeps. You see those shirts all the time and that would be the kind of shirt where she’s like “Yes, I’ve got 20 of those.”

ITM: I noticed in the background, each little vanity mirror has a logo. How did you decide to boil down each character to her own icon?

Thompson: We went to Disneyland and there was this [Disneyland Dream Suite], and that’s where we got inspiration and ideas because there were these really pretty mirrors. We wanted to have each one of them as a unique set. They have emblems as a reference to their previous movies.

Lehtomaki: You want to see the emblem and know, “Oh, that’s Rapunzel.” It’s that symbol, the flower symbol. Rapunzel has that moment in her own movie where she recognizes it so you know, that is her.

You can watch the momentous Disney Princess scene when “Ralph Breaks the Internet” arrives in theaters on November 21, 2018.