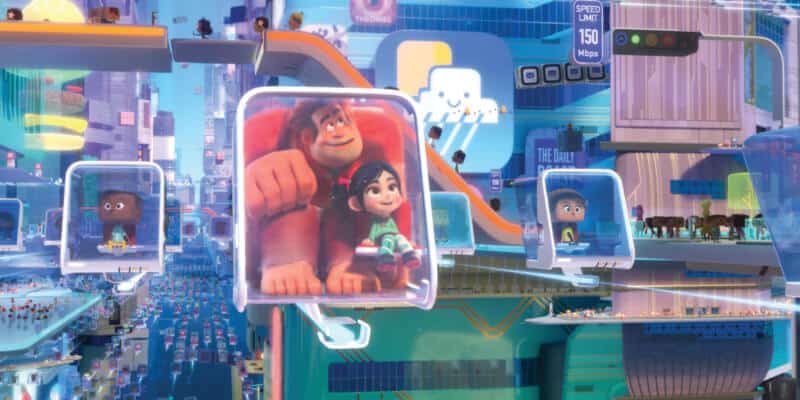 For “Ralph Breaks the Internet,” the upcoming sequel to Disney’s “Wreck-It Ralph” (2012), the team at Walt Disney Animation was given the daunting task of creating an animated internet for the film. When the movie arrives in theaters next month, audiences will be immersed in an endless metropolis version of the internet, filled with nods to real-life websites like Facebook, Amazon, and Oh My Disney.

Recently, Inside the Magic reporter, Mike Celestino had the chance to visit Walt Disney Animation Studios in Burbank, California, to speak with Matthias Lechner (Art Director, Environments), Larry Wu (Head of Environments), and Ernest Petti (Technical Supervisor) to learn about how the team helped Ralph and Vanellope enter the internet for the new movie.

Mike Celestino, Inside the Magic: When you first get tasked with building the internet, what are the first thoughts that go through your mind?

Matthias Lechner: My first thought was, that’s a perfect idea for the movie. The second thought was that it’s dangerous or daunting because everybody knows the internet, and people have strong opinions of the internet. So to satisfy this entire group of people, to convince them that this is the internet, that was a little scary. But I think we lost that at some point because we’re not doing “The Internet,” we’re doing our version of it. We can’t follow up with the constant change on the internet. It will be dated at some point, and we’ll accept that and live with that.

Wu: As they realized what it was going to be, and hearing bits of it coming through, these vast buildings and this ever-expansive metropolis — we started to be like, “Okay, how are we going to do this?” So we immediately started to figure out anything we could make more efficient in the process. Do we have the labor weeks? Have we fit it in the labor weeks? Then we plan with [the other departments], we strategize with them.

Ernest Petti: I’m just looking at, “Okay, there’s going to be a lot of stuff, there’s going to be a lot of buildings.” Once it’s a city and that’s established, it’s going to be massive and more extensive than anything we’ve seen before. It’s not a real-world city. How are we going to make sure, once we’ve built all that stuff and populated it, we can do that without bringing down the whole system and everyone trying to work on that. And what can we do today? How do we need to expand or render other tools to go that far? How do we get a process in place for all the screens and the videos, because that also was a very early concept that’s right in the [visual development] early on, is there’s going to be lots and lots of content. How do we set up a system that can all flow once we start building everything?

Inside the Magic: In the first movie, you had these video game environments that carried over into this one, and you also had the “real world” arcade. You have both of those in the sequel plus the world of the internet and websites and such. From a visual design level, how do you differentiate between those worlds? What visual cues are you giving people the difference between a shot in the real world vs. the internet and other environments?

Lechner: There are two primary cues for the real world. One is muted, so the colors are more realistic straight away. The second is I always try to get foliage or plants into the real world; that also is a clue straight away. Other than that, the internet has a specific look, color styling that you would recognize straight away, and all the different websites. Sugar Rush [Vanellope’s game] also has a unique color styling. When you see a frame, if you know the color blurred out, you would know where you are in the movie.

Petti: It’s not just the real world, the arcade, and the internet. Within the internet, we needed to make sure that as you travel from website to website, there were cues and styles that you could immediately click on. It’s partially in the environment, the characters and the outfits, and the colors of the businesses they wear. So it was applying a general treatment in different worlds, like in the real world and some of the websites, to immediately change the [color] cast so you can quickly identify where you are.

Wu: Some of the shape languages don’t exist in the real world naturally, so that helps.

The team visited the One Wilshire building in Los Angeles during the research process. Located at Wilshire Boulevard and South Grand Avenue, the building is the most highly connected internet point in the western United States. Through submarine communications cables, one-third of internet traffic from the U.S. to Asia passes through the building. 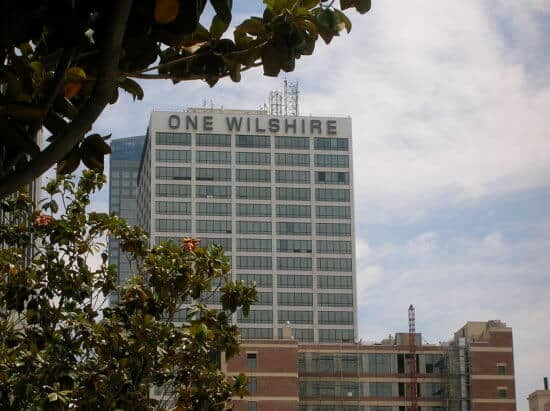 ITM: I’m interested in this One Wilshire building, which I had never heard of until today, which is crazy because I’ve lived in LA for 20 years. Can you tell me if you went on a personal trip to that building and how that influenced the design of the internet?

Lechner: Yeah, I didn’t know about that either, and it was a trip with a few of us from when we started the movie. They showed us around, and what impressed me the most, they told us that it grew from there because it’s close to [the AT&T Switching Center] and grew floor by floor. And you can see how it grew organically, there are layers and layers halfway up to the roof with cables that nobody knows anymore how they’re connected, and nobody dares to un-connect them.

Lechner: This must be worse. It’s organized, obviously, but it’s also so human and such chaos that I think it informed, technically, how we get into the internet with fiber optics. Still, on the internet, also the disorder and the technology is part of it.

The other exciting thing was that they don’t keep everything in that building; there are other places in Utah, say, where the rent is cheap. So if you watch a video and you notice the commercial comes on fast, it’s because it’s stored down there. And then if you have to wait a little bit, if you want to watch a video your grandma recorded ten years ago, then it will take some time, which is the time it takes to go to Utah and back. It’s just tangible.

Inside the Magic: You talked about a couple of the other influences on specific locations. Can you tell me about going to the Disney Parks and how that influenced your design?

Lechner: If you design a website as a building, you have two choices: you make a building with a sign on the front or make the building the shape of what it is. So some of the facilities like Facebook, or…

Lechner: Yeah, they’re influenced by things you would see in a theme Park. As the wood of a tree is not realistic. It feels like wood, but plastic-y somehow.

Petti: Also, Oh My Disney, with the hotel sites around it, that’s the ecosystem of Disney.

Inside the Magic: This movie has such a grand scale. Can you tell me about the technology you used to simplify that process to manageable something so big?

Petti: We put a few different things in place to help with it. One was improving the technology of our renderer to handle instancing and reusing objects at multiple levels so that we could only pay the price, essentially, once for anything we’re putting in even hundreds of times. That applied to the crowds as well.

We also just used set extension and other more basic tools to say, “Okay, we only really need to build to a certain point physically, and then we can cut out beyond that.”

Wu: We also couldn’t make 100,000 buildings. So how many do we need to make with variations to make you visually feel like there’s a lot?

Lechner: So we have the look variations, and they look different from different sides. Three main sidewalks mean you can move up and down, so you get a little of that.

Petti: Even having billboards that change. One building that’s the same as another building but has very different colored signs and everything on it can also feel very different.

You can see the vast animated internet of Disney’s “Ralph Breaks the Internet” when the movie arrived in theaters on November 21, 2018.

INTERVIEW: “Ralph Breaks the Internet” story team talks about moments that didn’t make it into the Disney sequel